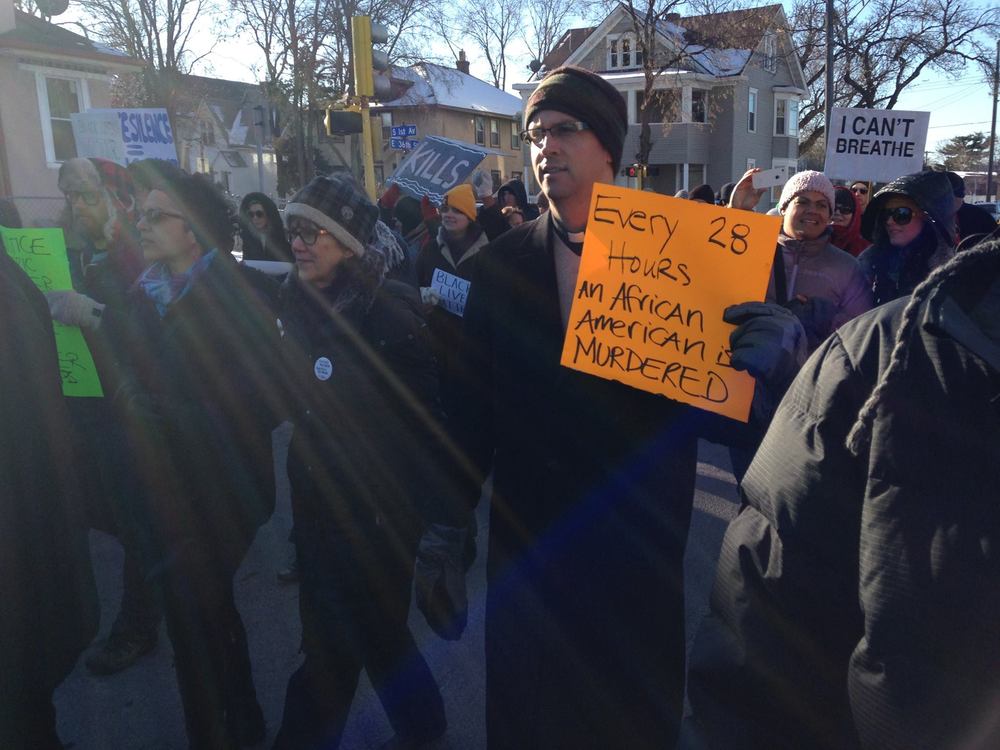 Minister Justin at a Black Lives Matter protest in Minneapolis in December, 2014. 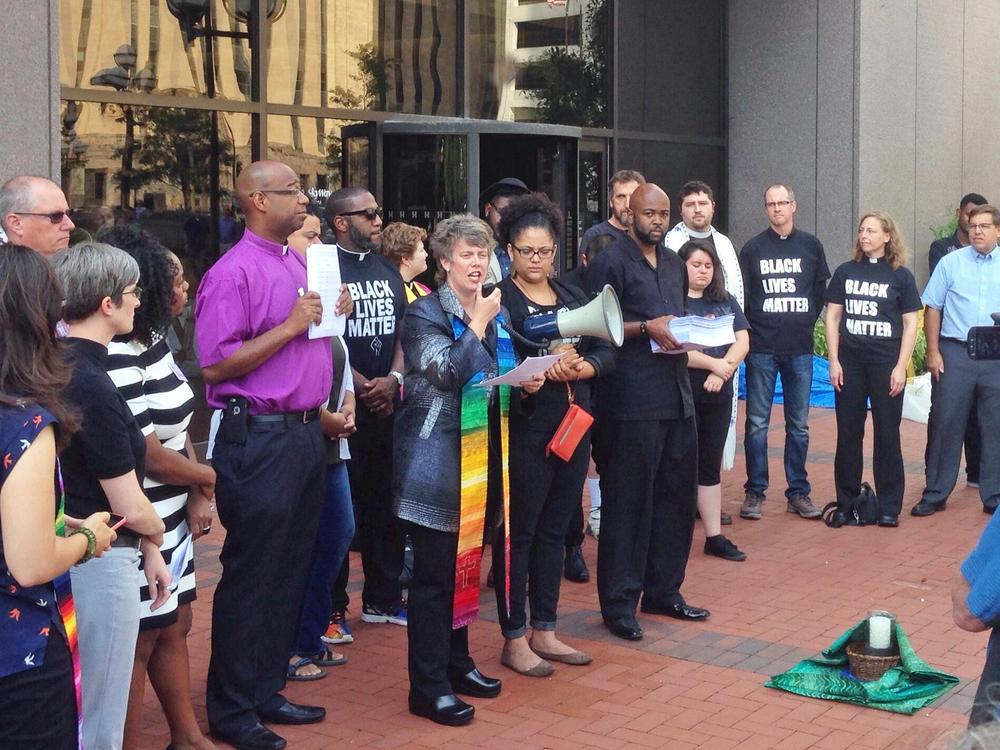 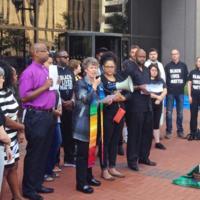 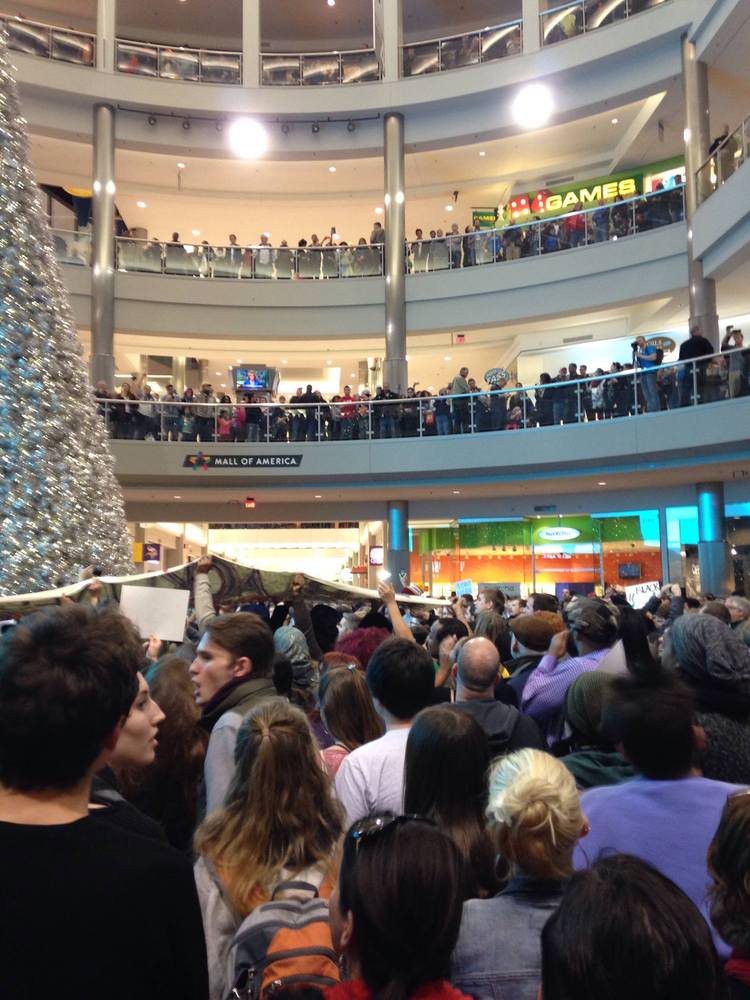 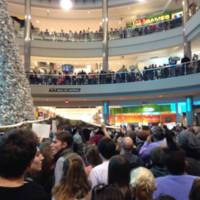 First Universalist congregants at the Mall of America protest, part of the Black Lives Matter movement.

While work inside the church focused on its own transformation, a group of First Universalist congregants became involved in the Black Lives Matter Minneapolis movement in 2014. Denise Konen, a congregant who was involved with racial justice organizing, discovered that Lena Gardner, one of the core organizers of Black Lives Matter, was a member of The First Universalist. Lyn recounted that Lena “requested that we have a vigil for black people who had been killed in structural racism. She talked to Justin who wanted to do it. It was open to the whole community. People from all over the city came.”1

In 2014, Lena also held a training session for congregants who sought to be active in efforts like the Mall of America protest. In the summer of that year, congregants participated in a series of mini actions as well. In 2015, the one year anniversary of the first Mall of America protest, First Universalist members engaged in other actions, such as a Christmastime rally at Southdale Mall in order, in the words of Denise Konen, to send the message to the larger community/public that “instead of spending money, we should focus on what’s really important- safety and equity for everyone.”2

"One thing about Black Lives Matter is that they have taught us, and we know this, is that white people like to be in charge. So if we’re going to do an event with Black Lives Matter, the training tells us that the pre-event is the time to ask questions. When the event is on, don’t just say, ‘Oh I think it would be good to something over there.’ Once you decide to be with an event, you look to the leaders. If you disagree with something, you can debrief after. But during the event, you’re in the hands of the leaders. That’s hard for a lot of people.

Breaking laws is hard for people. I used to analyze, ‘Does this feel right to me? Does this feel comfortable?’ And the first event, in fact, wasn’t comfortable for me. But at the second one, I saw how well disciplined and how organized the Black Lives Matter movement it is and I kind of just put my trust in them. So now I might question something, but I say ‘Well, I’m going to go with it.’

At the Mall of America protest, it was scary--there were police and riot gear lined up. But I just thought, ‘I’m going to believe in the movement. The issue is so much bigger than my fear, so I need to do it.’"3

“In general, it just feels like a wonderful community event, like we’re gathering together and supporting each other. People of all backgrounds were coming together for the same thing. It was love for jamar’s family, love for Jamar, love for people who shouldn’t have to go through this. I wish we didn’t have to get together for that reason. But a lot of good came out of that in terms of community.”4

Denise Konen on white people learning to step back:

Denise Konen collaborated with Lena Gardner, a core member of Black Lives Matter, to involve congregants in the Black Lives Matter movement. After the Mall of America protest in 2014, Lena decided to host a series of mini actions at the church during the summer. As part of one of the actions, Denise led a march in which participants sang a freedom song.  At the end of the action, Lina said, “That was a freedom song for our community; why did you change [some of] those words?” Denise paused and reflected. The lyrics had referred to police brutality, and Denise said that some participants wanted to assert that not all police are brutal. They wanted to focus on the system, not on the police, so they decided to remove the words. In this moment, Denise realized that “whiteness” had impacted that decision.5

Channing Mckinley on hesitation to get involved:

Channing explained that in 2016, there were roughly five or six congregants heavily involved in Black Lives Matter. She recalled that when she led a discussion group on white privilege, a man from the church expressed that he really wanted to get involved but “hadn’t gotten up the nerve to do any of the actions yet.”

Channing said that she’s “very sympathetic” to this hesitation and she has noticed “a lot of people “on the borders” of getting involved.

To remedy this, the First Universalist “held a session in March 2016 about how we can affect people in our own political spaces, and one thing we talked about was nviting people to join us on an action. Because it is scary. A lot of people are scared.”

Justin also invited Channing and Lena to present to congregants in the Social Hall about their works with Black Lives Matter advocacy and talk about “how people are initially afraid of it.” He wanted congregants to understand that fear is a natural part of the process, but that the First Universalist community supports one another through the fear.6