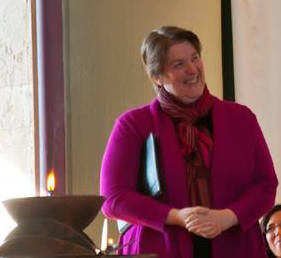 Jen's Introduction to the First Universalist:

When Jen was first introduced to Unitarian Universalism, she was drawn in by the idea that “joining the church wasn’t the end” of her “faith journey.” Rather, she said, “it was the beginning, and it was expected that whatever it was I believe in will change and grow as I have more experiences and learn more.” She felt comforted by Unitarian Universalism's appreciation of the notion that growth and change are essential qualities of faith. She said, “I am going to change and you expect me to change-- good.”

Jen chose the First Universalist because of its particular theology and history. Jen notes that there’s a huge range of beliefs that exist in the Unitarian Universalist faith, so finding a church that fits well with a minister’s personal theology is key. The First Universalist has roots in “universalism and the idea of a God that has a love big enough that no one is left outside the circle,” which aligned with Jen’s personal beliefs.

Jen’s Role at the Church:

Aside from overseeing unity at the church, preaching is one of Jen’s favorite parts of the job because she loves the “study and reflection” it requires of her. She said, “It’s a push to be vulnerable and to be authentic in the pulpit and I really take that as a challenge.”

Jen also oversees the Ministry of Pastoral Care. While she finds it difficult to encounter so much pain, this work also gives her the opportunity to “see people really draw on their resources in critical times.” She used to work in chaplaincy in a hospital, but she finds that doing pastoral care work in a parish setting is more meaningful to her because she “gets to see what happens afterward. You see someone have something awful happen and five years later, you see them helping someone else or you see how they’re healing.”

What Unitarian Universalism Means to Jen:

For Jen, being a Unitarian Universalist means means understanding that she’s part of a “long line of people who have been… daring at seeing the truth and creating a world where everyone has the opportunity to live awake and to their full potential.” Aside from the core values that align Unitarian Universalists, Jen appreciates that “there’s a ton of freedom within it too to have your own experiences and your own learning and define spirituality in your own way.”