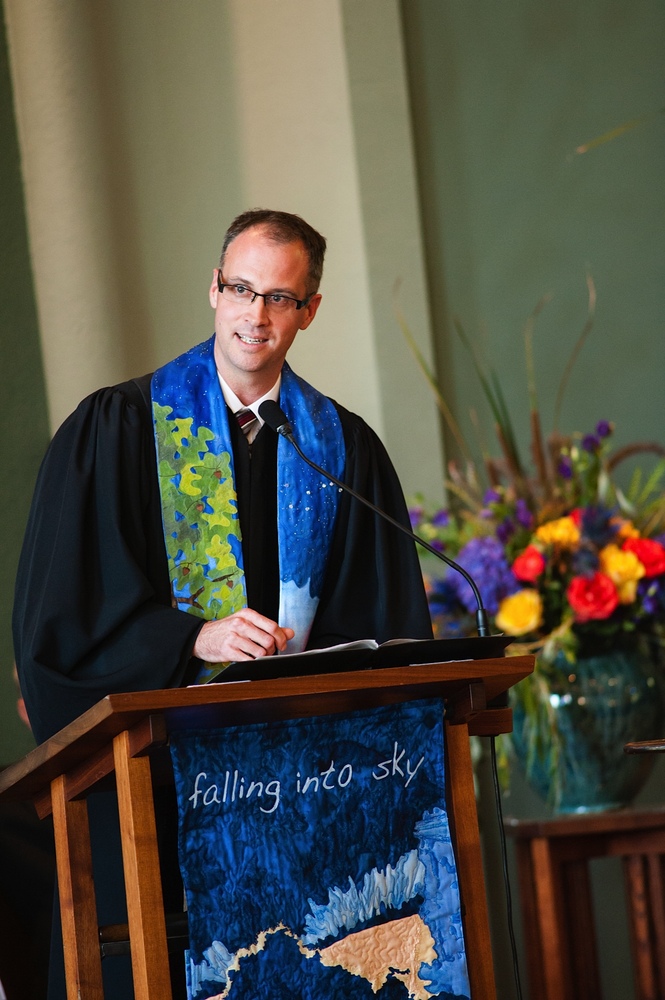 Justin Shroeder, senior minister at the First Universalist, has worked at Unitarian Universalist congregations for a total of eighteen years. He serves as the head preacher at the church, and he leads in the creation and maintenance of the church’s vision, partly by working closely with the Board of Trustees and church staff.

His Commitment to Racial Justice:

Since his work began at the First Universalist in 2009, Justin has poured his energy into racial justice efforts. Denise Konen, a former member of the Racial Justice Leadership Team, explained that, before Justin, the church did not focus on racial justice nearly as much as it does now. She said that when creating effective racial justice programming, “leadership is everything.” She said, “Justin is 200% in. He would tell you he didn’t have know much about [racial justice] a few years ago. That means he has gone through a lot of self searching and willingness to do hard stuff.”1

Lyn Rabinovich, who has immersed herself in racial justice efforts at the church, said that “the more Justin got involved, the more his heart is just so in it."2 As Denise expressed, “Once Justin woke up to racial injustice, he was woke and did not look back. His leadership in racial justice has made such an impact on me and our church's committment.”3

Despite the immense praise Justin has received from his commitment to racial justice, Lyn said, “He’s very humble.” In a racial justice group which he co-led, Justin said, “I’m not here to be a leader-- I am here to learn too and be in this struggle with you.”4

In addition to his humble demeanor, congregant Channing Mckinley described Justin as, “very brave” because “he’s taken a really strong stand. And not that people are against it, but people think we’re focusing too much on racial justice. He just hangs in there.” But, she said, “I think he risks losing people” as a result of the magnitude of his racial justice work.5

From the years 2012-2016, Justin has given several sermons related to racial justice, including:6

“I want to talk about race. I want to talk about race and the story we tell about race… race is loaded. It is complex. It is never easy… it is always emotional. Honestly, I struggled more with putting together this sermon than any sermon I have delivered in the three plus years I have been serving you as your senior minister. I suspect, despite my best intentions, that some of you will feel guilt and shame this morning. That I will probably hurt or offend some of you, and some of you will be in a swirl of emotion… so I asked myself, ‘why stir this up?’ I don’t have to do this this morning. And that’s just it. That’s exactly it. I don’t have to talk about race. Because I’ve been racialized as a white person… I don’t have to say anything about race. I can keep quiet… I can just go on living my life. That’s a privileged place to be, and that’s because of my white privilege… but so many people don’t have that choice.”

“What about us? What about this church? In our Unitarian Universalist faith? Do we offer a prophetic voice, a voice for justice and love, while continuing to have racist practice and beliefs?... We too are a product of this time and this culture, and at this church, and in this community grounded in hope, our religious journey is to pull back the layers, as many layers of the onion as we can, so we can see ourselves, our religious history, and the history of our country with eyes wide open.”

“I know many of you have dedicated your lives to this work and have been deeply involved and committed to racial justice. But what if the ‘you’ in ‘we’ve been waiting for you’ is about us, as First Universalists, as an institution, really starting to move in the direction of racial justice."