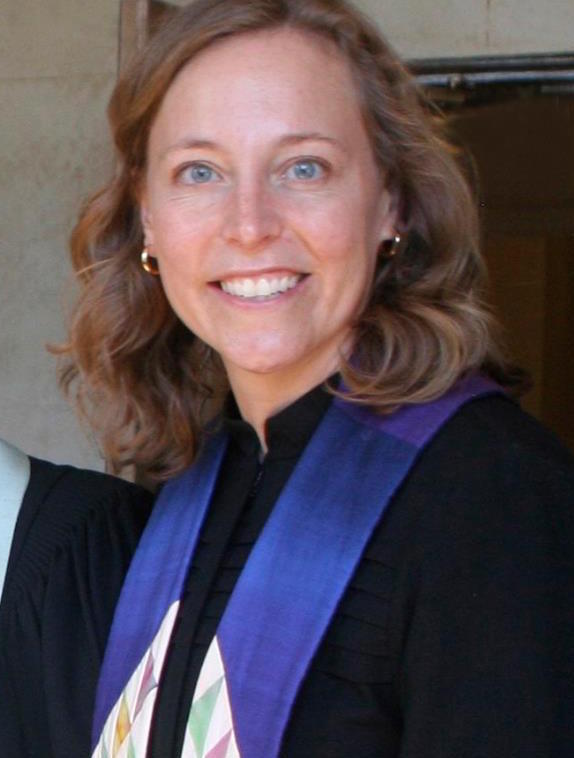 Her Introduction to Unitarian Universalism:

Elaine Tenbrink, the Minister of Membership & Adult Ministries, emanates warmth and kindness. As she sat down to tell me about her experiences at the First Universalist, her bright blue eyes remained locked on mine, drawing me into her world and her love of Unitarian Universalism. I felt comfortable talking with her within seconds, so her role as the minister that welcomes and integrates new members seems fitting.

Elaine’s journey through the Unitarian Universalist faith began when she was a teenager. She grew up in a multi-religious household. Her dad, a Jew, grew up in Israel and moved to the United States in his early teen years. Her mom grew up Methodist on a farm in Kansas. Because of their religious differences, they didn’t have a concrete plan for their children’s religious upbringing.1

Elaine’s Jewish identity held great importance to her as a child. “The only hard part was being half.” Her family was not particularly engaged in faith at that time, but Elaine’s experience shifted when her family started attending a Unitarian Universalist church the summer before she started high school.

In addition to the sense of wholeness that Unitarian Universalism allowed her, Elaine found comfort in the liberal leanings of her church. “It was kind of magical too, especially growing up in a pretty conservative outer ring suburb of Kansas city, to be in a faith community that was religiously liberal.”

Her Beginnings at the First Universalist:

Elaine was drawn to the First Universalist because she wanted a chance to engage in “community building” and to create “strong adult spiritual deepening programming.” Part of what appealed to Elaine was the chance to be part of a ministry team with Jen, Justin, and Ruth, whom she admired.

Her Role at the Church

In Elaine’s job, she oversees hospitality. She offers new congregants and visitors a warm welcome, creates pathways to help congregants learn more about Unitarian Universalism, and aids in the transition as new congregants get further connected. She also creates the church’s adult-learning and spiritual deepening programming. Elaine described these programs as a type of “adult religious education.” Because the congregation is so large, all of these opportunities happen in Circle Groups of between eight and ten people. Elaine said that these circle groups focus on “deep, attentive listening and creating a sacred space where we can really invite people to reflect deeply on their own truths and listen deeply to each other.”

What Unitarian Universalism Means to Elaine:

Elaine said that she does not serve as a Unitarian Universalist minister because she feels that Unitarian Universalism is a perfect faith tradition or the ultimate way of being a person of faith ever.” Rather, Elaine felt that given her context, “These are my people and this is the community that fits me the best.” She does not want to serve “a set of rituals or tradition or even a particularly faith identity” but rather, she strives to serve her “ultimate values” and “understanding of God.”

After explaining this, Elaine paused, unsure of quite how to proceed with her description. She told me that explaining her relationship to her faith is something she is constantly navigating. As Minister of Membership, she feels that she should be saying “something analogous to other ways of evangelism, saying, ‘this faith is the best.’” But, she says, “At its core, that is so not Unitarian Universalism, because we’re people who see value and wisdom-- true, real wisdom everywhere. And that’s kind of what we come together to acknowledge: that every faith tradition, at its core, has truth. Every person has a piece of the truth, and nobody has it all figured out. We are kind of coming together to learn what we can from each other and to grow.”

For Elaine, being a Unitarian Universalist means “integrity and continued spiritual discernment.” She described the First Universalist as a place where you can’t just believe whatever you want to believe without any thought or consideration. Rather, it's a place where where “we’re invited to rigorous discernment over and over to really dig deep and ask: ‘what must I believe?’ At the end of the day, ‘what are those truths that are so real to me in my bones that i couldn’t deny them?Elaine also understands that this process is continual. After asking these questions, she told me that she must “listen, to learn, to reflect and ask that question again.”

every faith tradition, at its core, has truth. Every person has a piece of the truth, and nobody has it all figured out.