Unitarian Universalism in Contrast to Other Faiths 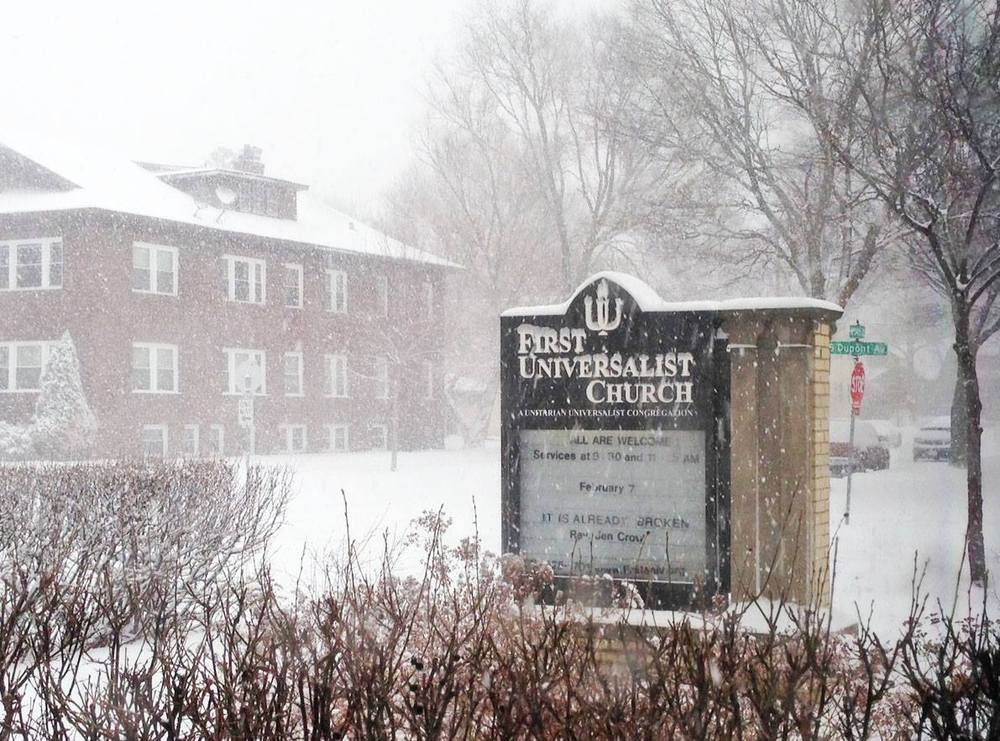 Many First Universalist congregants grew up practicing other faiths, but felt somehow unsettled by aspects of their religion’s creed.  Stan Sattinger noted that many “people who have become Unitarian Unitarian Universalists are born from Jewish or Catholic heritages.” He said, “I’m not making any analogies between those two faiths, but it turns out that a lot of us come from there, and we land on our feet here.” 1

Bill Elwood, who grew up attending a Lutheran church, found that his church “was not active in social justice activities. We raised money and gave it to higher level concerns that gave money, but we weren’t out marching on the steps of the capital or anything like that2 ”. Channing McKinley thinks that Unitarian Universalism’s focus on “how you live in the world and what you are doing with this life” is conducive to social justice engagement in a way that other faiths may not be. She told me that Unitarian Universalism is “not about getting some place necessarily.” While “some people might believe that there is an afterlife or a heaven, and that may be their rationality for whatever they do, the Unitarian Universalist faith itself says we work to make the world more equitable” in this life, not for any benefit in a later life.3 Stan also emphasized his appreciation for Unitarian Universalism’s focus on internal motivation as opposed to ordained ways of going through life. He said, “I don’t have a path carved out in the same way that it would be carved if I were, say one of the Protestant religions. When I say path, I mean my beliefs, my conscious, how I respond to things. It’s up to me. And I’m comfortable with that.”4

Congregants Peg, Fawzia, Lyn, and Stan all found aspects of their previous faiths that they could not fully embrace. Congregant Fawzia Khan was raised a Muslim in Nigeria. Fawzia said that “Every major religion has parts that even people who are very faithful don’t accept.” Fawzia believes that “we've come up with these structures” to try to explain who we are and why we are here, but “there’s so much doctrinal stuff that comes with that, like ‘don’t eat pork.’ Jews can’t eat pork, Muslims can’t eat pork. But why? If there was a reason back in that time that’s no longer applicable today, why are we still following it?” Because of this disconnect, when she spends time with her Muslim family, Fawzia has trouble connecting with some of their beliefs. For example, she does not believe that “if we say this prayer in Arabic, that it’s going to fix other situations. I believe it makes you feel better, and if that’s the purpose, go right ahead. But I don’t think it will change what’s going on out there.”5

Peg, who grew up with eighteen years of a Catholic education, similar felt a disconnect with her faith upbringing. She said that she left the church for “its misogyny.” As a woman and a lesbian, Peg felt that her church saw her identity as a “double whammy.” It took Peg a while to identify the misogyny she felt within her Catholic church. However, at as young as 19 years old, she identified her lack of belief in “any kind of trident God.” It took until she was in her late twenties to recognize how “patriarchal the Catholic structure was.” At this point, Peg said, “I spent my time in women’s consciousness-raising groups. That’s what we did in the 70s.” Through experiences like these, Peg felt “pure cognitive dissonance.” She couldn’t handle it” and left the Catholic church.6

Both Stan and Lyn found that they couldn’t connect their previous faiths to their lived experiences. Stan, who formerly attended a Presbyterian church, similarly noted that although the First Universalist has a routine of sorts, it doesn’t “wear on him” as “some things at the Presbyterian services” did. 7 Lyn, similarly, finds the teachings of the Unitarian Universalist church more meaningful than other forms of religion that she has experienced. She told me, “When I go to my husbands’ moms church in Grand Rapids, I get nothing out of it. It’s just words. But here, this is thought provoking”.8

It’s not someone else telling me what to believe. It’s encouraging me to figure out for myself what i believe in.

The flexibility, acceptance, and openness to change that the First Universalist embraces differs from the previous faith practices that many of these congregants experienced. After Peg’s experience with Catholicism, she sought Unitarian Universalism as a “non creedal" religion.9 ; Lyn similarly “didn’t want anything with a strict creed,” so she found her home at the First Universalist.10 Stan reflected that the First Universalist does in fact have a “routine” and “creed.” He noted the weekly recitation of the “love is the foundation” prayer as an example. But, he said, “that doesn’t wear on me like some of things at some of the presbyterian services.”11 For Fawzia, Unitarian Universalism offers the “values of every great religion without the dogma and the rules.” While, as mentioned above, other faiths have aspects that she cannot fully accept, she “doesn’t feel that conflict with Unitarian Universalism.” Her experience with Unitarian Universalism is that, “It’s not someone else telling me what to believe. It’s encouraging me to figure out for myself what I believe in.” She still hesitates to say she’s a “religious person,” because it has she said, “it holds a particular connotation in my brain.” But, as her husband teases her, “You’re a church lady! You’re over there so much volunteering for this, that, and the other.” Fawzia’s introduction to Unitarian Universalism has allowed her to “become comfortable with spirituality” in a way that she wasn't before.

I don’t have a path carved out in the same way that it would be carved if I were, say one of the protestant religions. When I say path, I mean my beliefs, my conscious, how I respond to things. It’s up to me. And I’m comfortable with that.