Natalie Jacobson majored in American Studies at Carleton College. She is interested in further exploring the connection between faith and social justice.

When I started fieldwork at the First Universalist, I never could have anticipated how much I would enjoy my Sunday morning visits to the church. As a busy college student, I at first thought that leaving campus for an entire morning and early afternoon every Sunday would be a hassle and a chore. It only took one visit, though, to realize that my time at the First Universalist would become the highlight of my term.

At each visit to the church, I felt a sense of vitality, warmth, and passion both in the services and in my conversations with ministers and congregants. When my interviewees shared stories, their faces and whole bodies brimmed with excitement. They wanted to share everything: every bond they’ve formed, every volunteer event they’ve lead, every social justice march they attended, every sermon that has stuck with them. In this process of sharing, I could tell that First Universalist congregants wanted me to understand what makes this such a special, meaningful place. I experienced moments in which I felt my interviewees bursting as they attempted to encompass all that this place means to them in the span of a short interview.

Because the meaning threads so deeply throughout their lives, finding the right words proves challenging. Congregant Peg Mitchell’s reflection on her gratitude reflects the overall sense of passion and energy I felt at the First Universalist: “I feel so grateful to be alive, and to have this level of support is incredible; I mean, it’s unbelievable- we’re so unbelievably blessed with riches and advantages and all the assumptions of life, and some days I just can’t get over how much collectively we have as a culture. So I feel pretty lucky.”

Hearing sentiments such as this gave me an understanding of the incredible power that a faith community can have on people’s outlook on their lives. Because I was so personally compelled by the stories I heard and activities I experienced, one challenge that I found in my fieldwork was trying to not become too invested in the First Universalist. I was born into a family in which faith is not an integral focus. My mom grew up in a Jewish home, and my dad grew up in an essentially religion-less home. When they got married, they decided to raise my brother and I without a religion. I would identify as “culturally Jewish,” but I have not spent much time exploring what faith means to me. When talking with congregants, I found that many of them reminded me of myself—people who reflect deeply on their life experiences, dream of making the world a better place, and surround themselves with other activists who want to make social and environmental change. Coming from a college campus with an activist bent, a place where I am highly involved with environmental and social justice efforts, I was surprised to find a similar emphasis on activism within a faith community. These feelings of familiarity and connection to my interviewees and to the words in the Sunday sermons sometimes drew me out of an academic place, and I sometimes struggled to maintain an objective look at my field site.

Despite this challenge, I am so grateful that I have gotten to explore so many aspects of faith. The topic that I have found the most compelling is my exploration of the social justice work in spaces of faith. I am astounded by the First Universalists’s commitment to racial justice work. I believe that this work has the potential to expand beyond the walls of the church and into other circles within the Twin Cities. I have found this topic so fascinating that I want to expand it in the future. My goal is to explore other racial justice efforts that have emerged in other places of faith in Minnesota and to see how these efforts connect with one another. 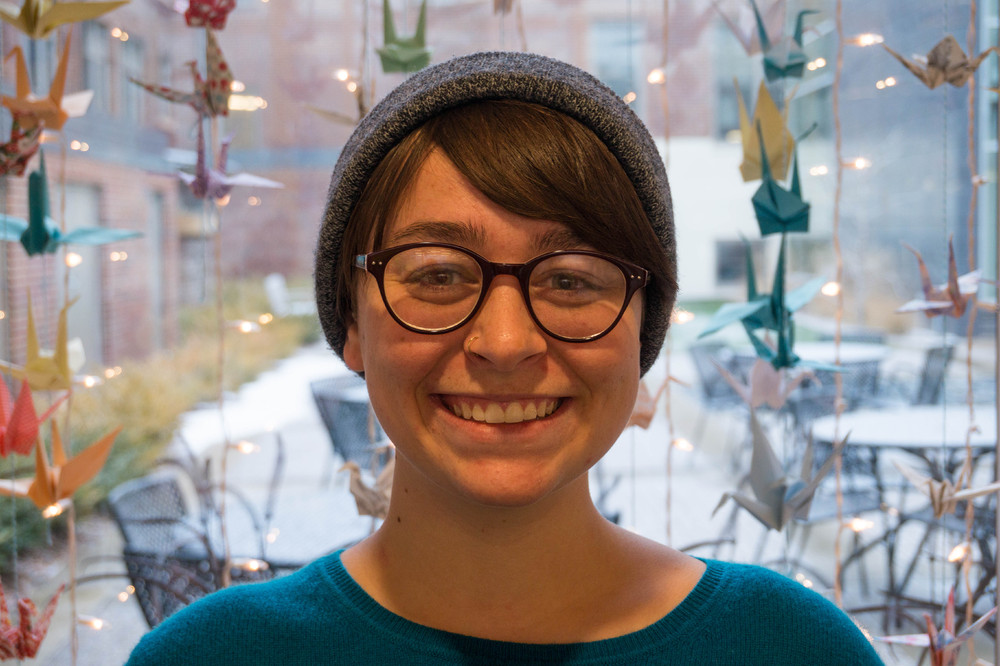 Emily Perlman is a junior Women's and Gender Studies major at Carleton College. She is interested in the intersection of gender and sexuality, religion, and education.

I, like Natalie, grew up in a culturally Jewish home in San Diego. My dad is Jewish and my mom was raised Episcopalian, and I tried out aspects of both religions, but never found myself feeling especially drawn to either one. Since my parents have divorced, my mom has found solace in a "spirit center", which is advertised as an "inclusive spiritual community welcoming people of all faiths" 1 . I, however, have grown up to see religion as something regimented, old-fashioned, and ridiculous, and have scoffed at her attempts to get me to go to her church.

Carleton has made me more open minded in many ways, especially to religion through the religious studies classes that I've taken here. Although the majority of the student population at Carleton identifies as non-religious, I have found myself gaining new perspectives through learning about religion. I decided to take this class in order to gain more perspective on how people find religion in their lives, and it was one of the best choices I have made at Carleton. The people that I have met throughout this project are some of the kindest, most genuine and caring people that I have had the pleasure of meeting with, and I feel lucky to have been able to join them in their worship and learn about their experiences in their faith community.

When I first began this project, I had no idea what to expect. I remember searching through lists of religious sites around Northfield, trying to figure out if I wanted to do research with a religious community very different from what I know, or if I wanted to do research on a religious community with which I saw I shared obvious common values from the start. I chose the site for its progressive sex education curriculum, Our Whole Lives, which is detailed throughout this website. However, although I originally chose First Universalist for the OWL program, I became quickly enamored with the people, the stories, and the attitudes present at First Universalist. I began talking with people about racial justice and social justice, talking with them about their personal beliefs, and talking with them about what religion meant to them. It was so much more than understanding this sex education class- it was about understanding what draws people to this religious site, and what makes them stay. As Natalie and I drove back to Carleton each Sunday after the service, we talked about all the incredible people we had met, the stories we had heard, the passion we had absorbed through talking with these people about what they truly care about.