The Baháʼí tradition emerged in 1844 in Iran when Siyyid ’Ali-Muhammad of Shiraz declared himself to be the twelfth Imam and claimed the title of Báb. In Shia Islam, the lineage of the Imamate harks back to Muhammad’s familial line, and draws its authority from that spiritual line. Although there are a range of sectarian Shi’ite Muslim teachings concerning the Imams, there is broad agreement that the lineage had gone dormant and that an Imam would make a messianic return. Accordingly, the Báb attracted many followers but also drew accusations of blasphemy from Shi’ite religious authorities.

The Báb was imprisoned and eventually executed, but after his death, his follower Mirza Husayn-’Ali experienced divine revelation and extended the Báb’s teachings. Under the leadership of Mirza Husayn-’Ali, who took the title of Baháʼu'lláh, and of his descendants, the Baháʼí tradition spread across the Middle East and ultimately around the globe, today claiming more than five million members. The faith promotes human equality, especially racial and gender equality. Baháʼí practioners believe that all faiths are divine in origin and that the purpose of life is to worship God and to advance society. The faith also stresses the importance of universal education, peace, and critical thought in pursuit of truth. For more information, please visit the Pluralism Project's page on the on the Baháʼí Faith.

Baháʼí Tradition in the U.S.

By the 1890s, immigrants began to bring the Baháʼí tradition to America. In 1898, ʻAbdu'l-Bahá, the son of Baháʼu'lláh, sent four Baháʼí teachers to the U.S. to spread knowledge of the faith. Books of scripture were translated into English, and in 1909 the first national Baháʼí convention was held in Chicago. In 1912, ʻAbdu'l-Bahá visited North America to share his teachings, which continued to attract increasing numbers of followers. His grandson and successor Shoghi Effendi increased accessibility to Baháʼí texts by translating many into English and explaining more about Baháʼí teachings. By 1964, there were 10,000 Baháʼí followers in North America, by 1974 there were 60,000, and by the late 2010s there were 171,000. For more information on the growth of the Baháʼí tradition in the U.S., please visit the Pluralism Project.

ʻAbdu'l-Bahá visited Minnesota in 1912 when traveling across North America and spoke in Minneapolis about the need for moral progress in addition to material advances (read more about his visit here). Since that time, Baháʼí communities have sprung up across the state. As of 2010, Minnesota was home to around 2000 adherents, 16 congregations, and the Baháʼí Center of Minneapolis. 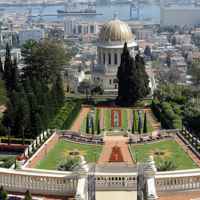 A glimpse of Baha'i community and Baha'i-inspired action in Minneapolis, Minnesota.