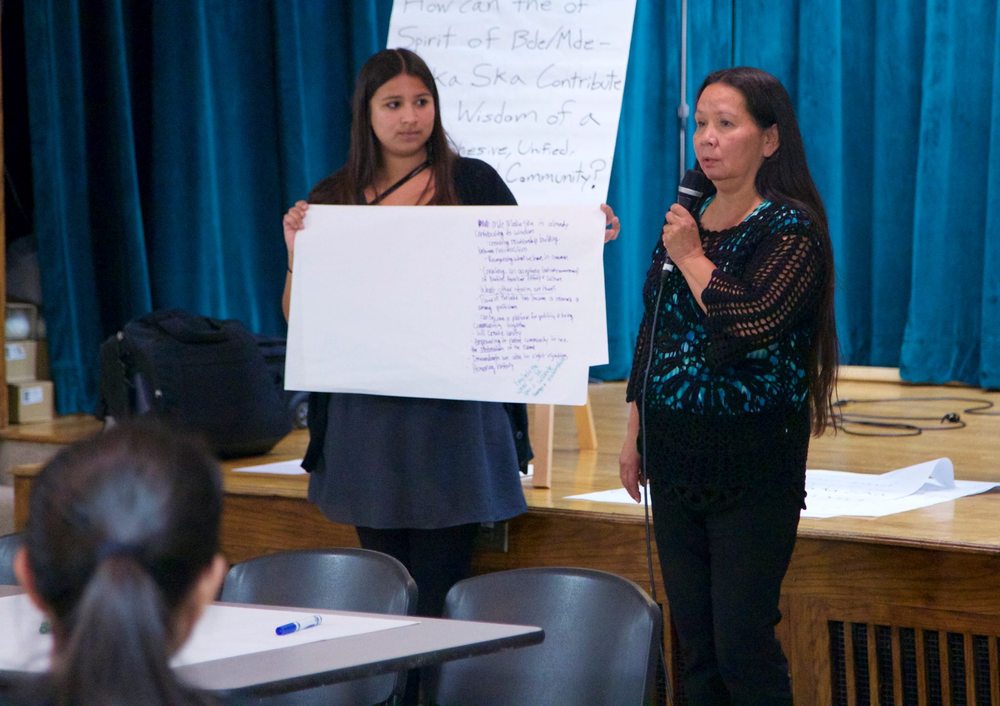 The First Universalist has engaged in ongoing dialogue and action regarding the proposition to restore Lake Calhoun’s original name: Bde/Mde Maka Ska, meaning White Earth Lake. The lake, located in Minneapolis, was renamed “Calhoun” in the 1800s to honor South Carolina statesman,  former vice president, and widely-known supporter of race-based slavery, John Calhoun. Around 2011, Native Americans in Minneapolis began to elevate a conversation regarding the prospect of returning to the lake’s original name. In Fall of 2015, over one thousand people signed a petition asking the Minneapolis Park and Recreation Board to rename the lake. 1

Starting in October of 2015, the First Universalist hosted a series of “community conversations” about the renaming, which allowed small groups to reflect on questions related to the “Spirit of the Lake.” Congregant Marjorie Herdes explained that half of the group in attendance as well as the facilitators were Native American. Many of the Native American attendees shared personal stories, which had a great effect on many First Universalist congregants. Congregant Brian Hughes said, “Most meaningful to me were the stories shared by the many Native attendees. Previously, my understanding of the Native connections to the lake were really only in my imagination. On this night, our Native friends were able to add texture to my spiritual understanding of the lake by reaching back years, even generations to share visions and stories of their ancestors. Each story bonded with the other stories to form a deepening web of understanding.”2

Each story bonded with the other stories to form a deepening web of understanding.

Polly Talen, a member of the Racial Justice Leadership team, appreciated that this renaming conversation turned the church’s attention to Native Americans, a marginalized and underrepresented group in the Twin Cities. Polly attended the first community conversation because she previously “knew nothing about Native Americans.” Polly told me that her experience hearing Native American stories was eye-opening; as she listened to Native American chants, prayers, and songs at the meeting, Polly said, “It went right into my soul. My eyes burst with tears.”

Polly came to the realization that many congregants at the First Universalist, being upper-middle class, “travel all over the world to have experiences in different cultures than their own, to taste their food, hear their language, and see their rituals.” While congregants travel all over the world to learn about various cultures, Polly said, “we have Native Americans in our own backyards that we know nothing about.” Polly told me that her Native American history lessons were “terrible,” and she imagined that the same was true for most white Americans. Polly expressed that she is now “waking up” to her miseducation and is “slowly catching up.”5 As these conversations continue within and outside the church, the hidden stories about Native American experiences in the United States will hopefully come to the fore of our collective memory.