History of the Sites 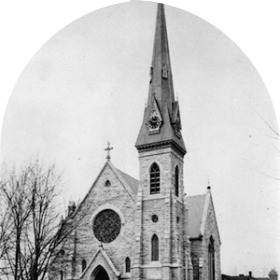 The Church of the Redeemer, dedicated in 1876

The history of First Universalist is closely tied to the history of Minneapolis, as many of the city's founders were members of the church. Each site has its own unique history- from the "Cataract House" to the Church of the Redeemer, to services in the Grand Opera House, the settlement house (Unity House), the Church House, and old synagogues, the church has certainly made its mark on different religious sites around Minneapolis.

Each site meant something different for the church in its growth as a religion. In its original site, the church was a strict religious institution, and the Cataract House was a religious site for the important leaders of the day to congregate and share religious and political ideas.

The Church of the Redeemer (see photo above) was the church's first site that was dedicated solely to the church, and its 212-foot bell tower and the first pipe organ in the city drew followers to the church. As the members looked to grow the church, they began to build a new building while holding services in the Grand Opera House. The new building was built of blue limestone, and had stained glass windows executed by New York stained glass companies.

During the next period of the church, followership was low, and the only way the church stayed alive was through founding the first settlement house in Minneapolis, the Unity House. At the new location in 1949, the Church House, the church grew under the new religious merging of Unitarianism and Universalism, and the religion of the church shifted with this merge in the 1960s.

The Civil Rights movement in the 1960s was influential for the church, and shifted the focus of the religion to be more social justice-oriented. During the past 60 years, the church has become more open, less religious, and more justice-focused. While each minister has brought a new focus to the church, there is a long history of social justice at First Universalist.