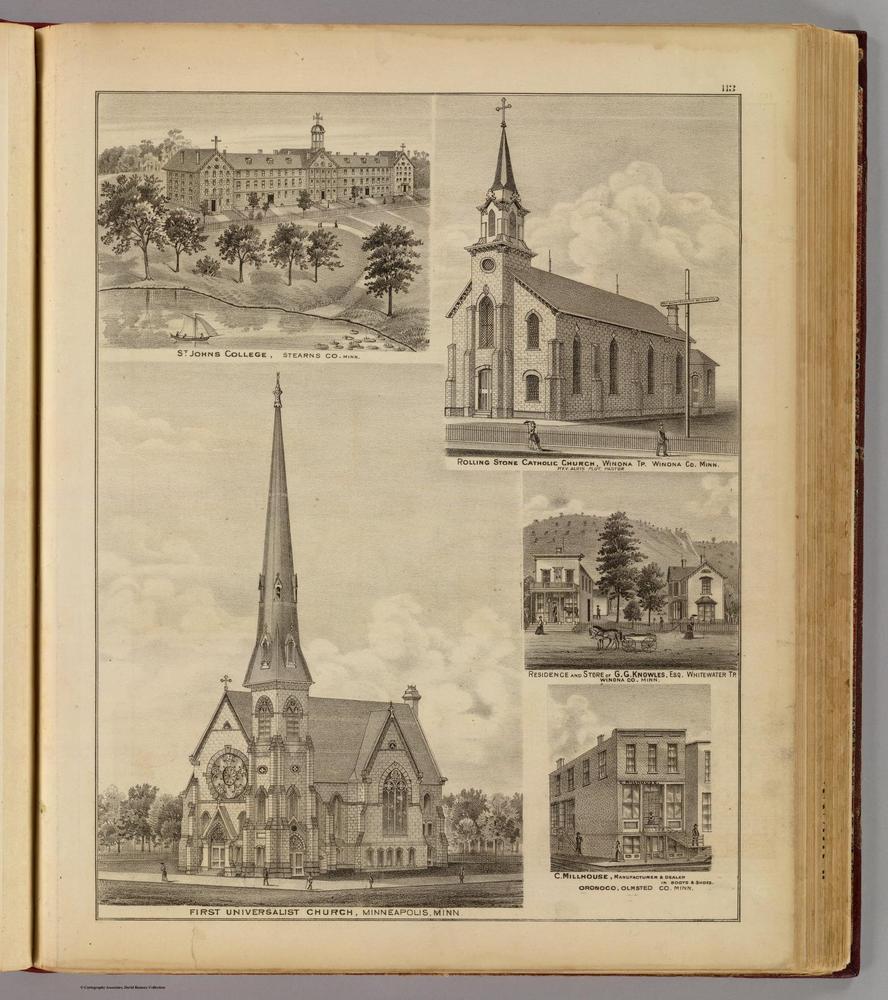 Drawing of First Universalist Church from 1874

In 1866, under Tuttle’s leadership, the first building of the First Universalist Society was built at 5th Street and 4th Avenue South. The building was wooden, Gothic, and held the city’s first pipe organ, as well as 400 congregants. However, as the church grew, Tuttle began to look towards larger spaces to hold his quickly growing church. In 1876, a stone building was built downtown at 8th Street and Second Avenue South, and dedicated on July 10th, 1876 as the Church of the Redeemer, although the name of the church was never legally changed from First Universalist. Unfortunately, in 1888, the church burned down, and the 212-foot bell tower was the only remnant of the church. 1

While construction was underway for the new building, services were held in the Grand Opera House. The new building was dedicated on November 24th, 1889. In Hudson’s Dictionary of Minneapolis, published in 1892, the building is described as “built of blue limestone in gothic style” […] with an interior that is “even more handsome than the outside”, the woodwork was all of solid black walnut”, and “the carpet and pew cushions [were] of a darker color, approaching maroon.” There is a distinct focus on the stained glass windows, which were “executed by New York stained glass companies and are claimed to be as fine as anything of the kind in the country”, costing about $20,000 of the $90,000 expended on the project. 2

In 1891, Tuttle retired after 25 years in the ministry at the age of 67. While he was in ministry, he created a second Universalist church in St. Paul, as well as a third at 27th Street and Blaisdell Avenue South, which unfortunately closed down during the Great Depression. Although the Church of the Redeemer was home to some of the city’s wealthiest families, Tuttle dreamed of ministering to the less prosperous, and his involvement was “based on his view that it was important to enlarge the efforts of liberal religion in the new city.”3