Talking About Race with Kids 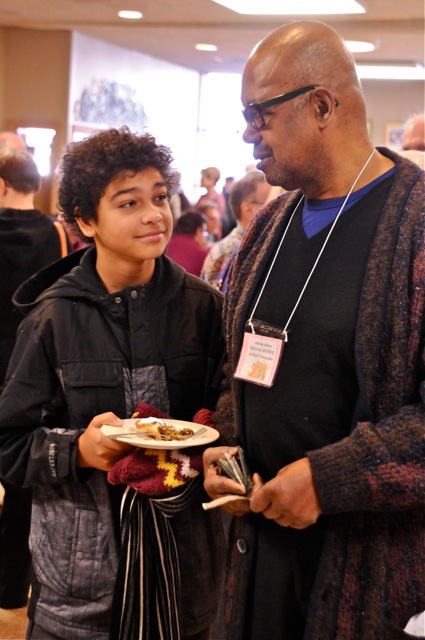 A congregant speaks with his son in the social hall after a service.

Talking About Race With Kids is a program led by Denise Konen, a member of First Universalist. This program centers on the fact that kids notice race, and want to talk about it, but parents and educators have been trained that talking about race is impolite. The training is 5 weeks long for 1 1/2 hours each class, and teaches parents, caregivers, and teachers to "build our capacity for talking with children and youth about race, racism, and whiteness in ways that are supportive, grounded in the realities of the world, and hopeful". 1

Denise is a liscensed parent educator, and when she worked for the Hopkins School District, teachers would tell her that they "didn't know what to say when kids bring up race. Four girl olds will hold each others hand and the white girl will say 'I can't hold his hand- he's dirty'. The teachers would respond by saying 'we're all friends. We don't treat each other that way'". Denise believes that being colorblind doesn't work, and when the teacher ignores what the girl said by saying "we're all friends", the girl does not get to look at her internalized prejudices and figure out why what she said was offensive or hurtful.2

Denise enjoys doing this program at First Universalist because of the transformation that happens. At the start of the program she has parents coming in saying, "do we have to talk about this so much? We're putting too much emphasis on it and it's making it more of a problem than it should be". But by the third week, Denise finds the parents becoming depressed with the situation, as they realize how ingrained colorblindeness is. But by the end, the parents "realize they can do something". She loves being able to talk about race, racism, and whiteness in her faith community, because "in a school district, there is not the same kind of commitment. It's more like, "'I'm committed to valuing each person, creating more value in the world'. Or 'I don't like that our communities are segregated. I don't like feeling awkward around a person of color; I don't want it to feel that way'. Those are the kinds of things people come in with that's more heart-opening because they recognize that my faith matters to me, my values matter to me. So it's exciting. I love it". 3