Transmission of Cambodian Culture to the Next Generation 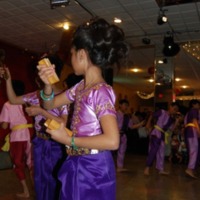 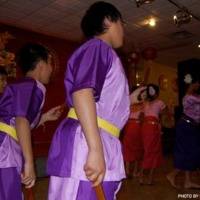 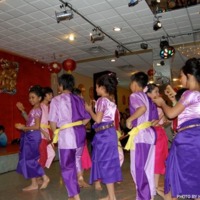 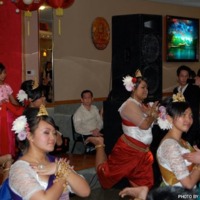 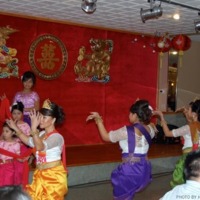 Like many American churches, Watt Munisotaram’s activity during an average week is meager. But on Sundays, a day that holds no particular meaning to Buddhists, the temple is alive and active. Music is played in the main temple; children are dancing in the old temple; babies are crying upstairs in the old temple; kids are running back and forth, from old temple to new temple, on snow-covered steps. These kids, scampering around the grounds, are the future of the temple, but all of the parents spoken with in this project expressed concern about how the transition will go when the time comes for these kids to take lead roles in the temple.

A written statement hung on the wall of the lower sanctuary, signed by Venerable Ithimuni Sang Moeng, the Abbot of Watt Munisotaram, states “the construction of this beautiful Buddhist temple, the living proof of the Cambodian culture and civilization”, emphasizing the importance of transmitting Cambodian culture to the next generation.

The biggest challenge faced is simply understanding Buddhism. “You really have to understand from the beginning and how it works…the general idea…what leads to what,” Phan says, in order to see the super close connection between Buddhism and everyday actions. Some of the most involved volunteers at the temple reiterate this, saying that their own children love to be a part of the temple but don’t fully understand why it’s all being done. For the future of the temple, however, thorough understanding is imperative.

“I am educational motivator. I motivate my own Cambodian people, especially younger generations, to preserve our traditional Cambodian cultural heritage. My mission is to establish a Cambodian cultural heritage so the Cambodian generations [can] be able to maintain their cultural heritage; language, food, clothing, you name it, everything. The language, especially the language. I’d like to see a language class begin as soon as possible. So my idea once again, is to have a permanent community center where we can go to school at least two or three days a week. Right now I am [on course to establish] a group of professionals to preserve our Khmer cultural heritage so that we can teach them [the younger generation]. That’s my mission and my vision in life.”

For someone like Dr. Chang Thach, who in the winter of 2010 described himself as an "educational motivator of the temple", programs like these ones are incredibly important. “My mission is to establish a Cambodian cultural heritage,” he said, “so the Cambodian generations [can] be able to maintain that.” Dancing and instruments are the only organized ways the temple promotes its Cambodian culture in children, but other programs are in the works. Language classes are the most important things on Thach’s list, because in addition to greater cultural awareness, communication with monks would become far easier. Although many of the monks do speak some English, Cambodian is far more effective when communicating. An additional Watt Munisotaram campus in the Twin Cities, one of Thach’s dreams for the temple, would make programs like language classes much easier purely because of location and proximity to the greatest number of Watt attendees. Listen to Thach speak here.

“Especially with my daughter you know, I don’t want her to forget my own culture. Some people forget it but for me I don’t want her to forget it so she’d know [about the culture. That’s why I tell her to go every day [on] Sunday to learn more about it. Oh she love it, one time I try to test out [not attending the Watt as often] and she said ‘No Daddy, I love it!’ Plus she has fun too and that’s why, and that’s what’s most important. But they love and they love the culture that’s why they want to go [to the Watt] all the time.”

Stronger programming would certainly help retain these second and third generation Cambodians and provide depth to involvement, and the dance group is a good first step. In an interview, a father recounted that a few years ago, he was considering not attending the temple as often. His eight-year-old daughter resisted, however, saying “No, Daddy. I love it!” There is a generally recognized need for more programming. Listen to Saravuth Sok, the father mentioned, speak here.