Other Statues and Symbolism 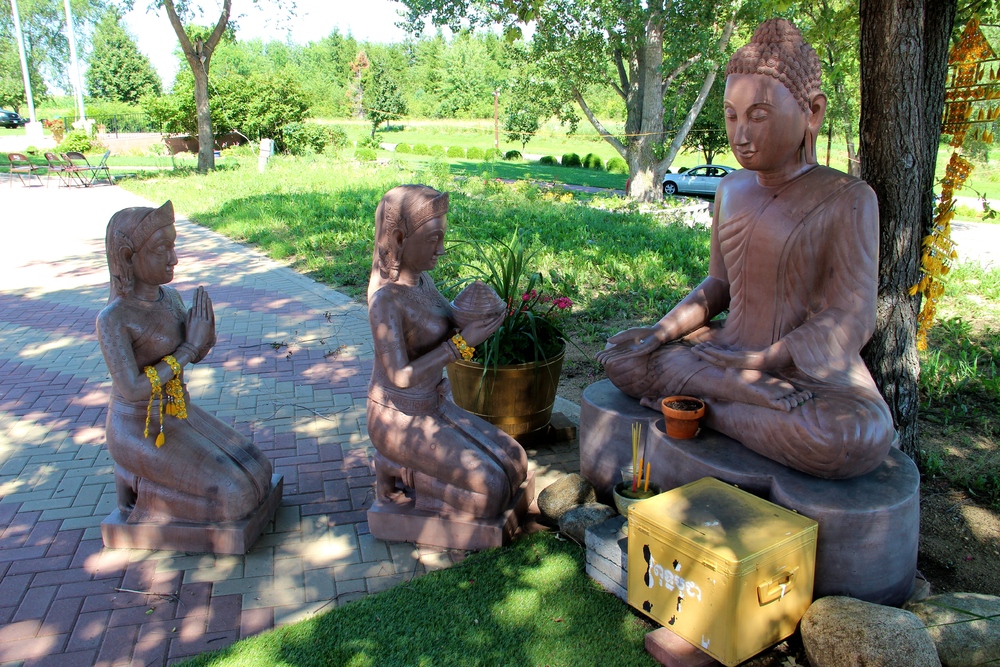 Sujãtã, her maid, and Prince Gautama Before Reaching Enlightenment

The group of statues refers to the story of Sujãtã, a daughter of a rich man, who prayed to the tree-spirit of the Bodhi tree to have her first child be a son.1 Sujãtã's prayer was fulfilled, and she sent her maid to the Bodhi tree to clean up the area to make an offering to the tree-spirit in return. The maid found a starving man sitting under the tree, the Prince Gautama, and the maid ran back to tell Sujãtã that the tree-spirit had made himself visible to accept her offering. Sujãtã came to the tree with milk rice in a golden bowl and offered it to the starving man, saying, "may your wishes prosper like mine have", and then departed. Sujãtã later learned that the man attained Enlightenment, becoming the Great Bodhisattva after taking the milk rice offered by her. She was "overjoyed with the thought that she had made a noble deed to the greatest merit."2 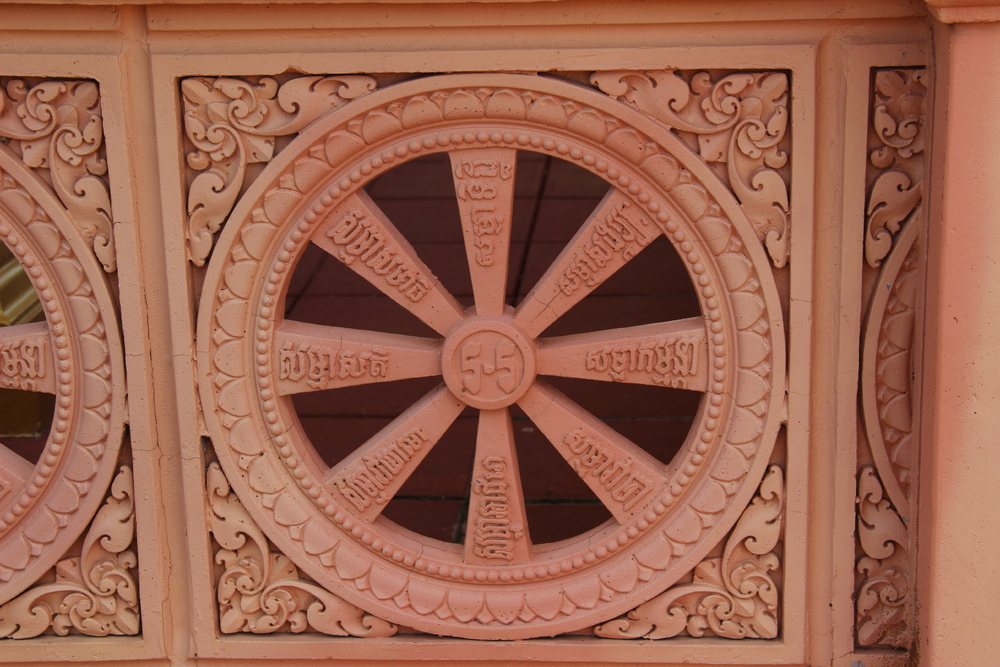 The wheel represents the dhamma (dharma in Sanskrit). Dhamma is the words of the Buddha, the practice of his teaching, and the attainment of enlightenment.

The wheels around the stupa and the temple represent the dhamma (dharma in Sanskrit). Dhamma is widely defined to be the words of the Buddha, the practice of his teaching, and the attainment of enlightenment. Dhamma is not just doctrines; it is teaching plus practice plus enlightenment.1 The eight spokes on the wheel represents the eightfold path to enlightenment. 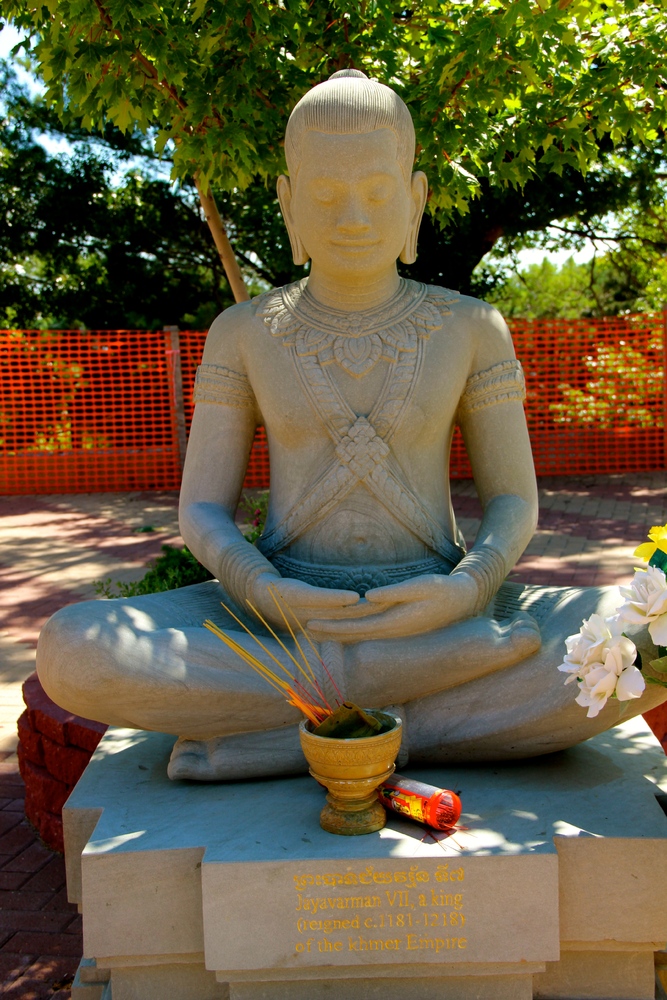 Mahaparamasaugata, bestowed the name Jayavarman VII posthumously, was King of the Khmer Empire from circa 1181-1218 in present-day Siem Reap, Cambodia. His reign was notewrothy for his unusual devotion to Mahayana Buddhism (he made Buddhism the official state religion), as only one prior Khmer king was a Buddhist. Additionally, he guided the construction under of 121 rest houses built every fifteen kilometers along elevated highways for travellers along with 102 hospitals. Jayavarman VII is generally considered by historians the most powerful Khmer monarch of all time.1

The particular portion on the plaque in the main courtyard of the Watt is the Dhammacakkappavattana Sutta, or The Discourse on Setting the Wheel of Dhamma in motion. 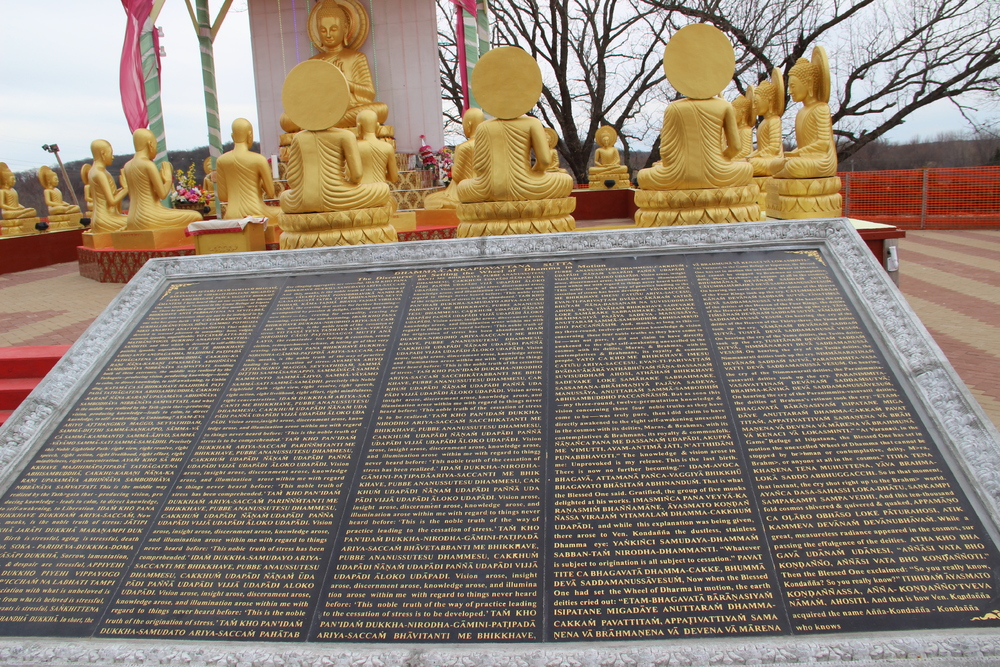 Large plaque in the main temple outdoor area with portions of the Pali Canon.

The sutta, which is translated to English from Pāli on the plaque, is believed to be the first teaching of the Gautama Buddha after he reached enlightenment and principally discusses the Four Noble Truths. The Pali Canon is a collection of texts including many dialogues of the Buddha, and is the central and common textual tradition within Theravada Buddhism. 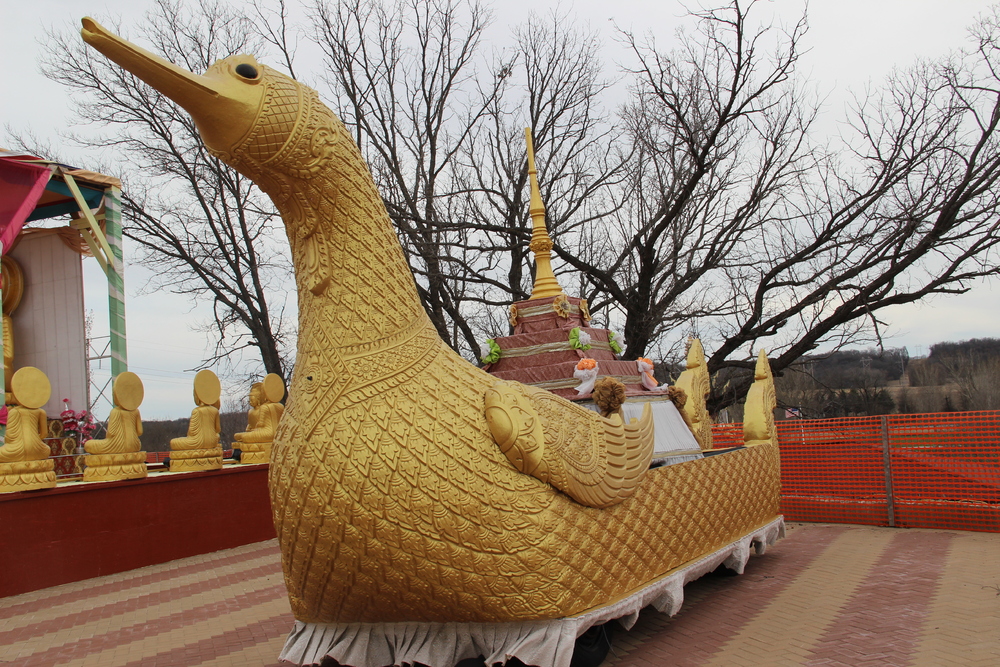 A pick-up truck converted into a golden Hamsa bird (an aquatic bird such as a goose or swan). Before airplanes, the Hamsa was the sacred, mythical vehicle.1