This map shows the percent of a country's population that are Buddhists, according to a Pew Research Center study from 2010. Buddhists made up 1.2% of the U.S. population in 2010. 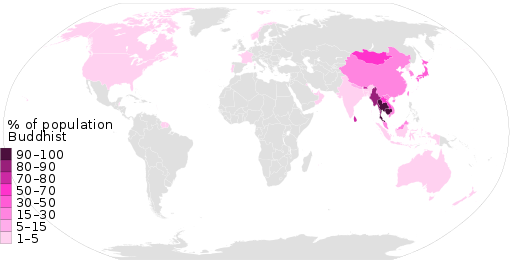 A 2010 Pew Research Center survey recorded Buddhism as the fourth largest religion in the United States after Protestantism, Catholicism, and Judaism, with 1.2% of the nation identifying as Buddhist.1 The evolution of Buddhism in America is interesting: fairly widespread, general interest in the religion was cultivated in the mid 1800s, partially in conjunction with the building of the first Buddhist temple in America (in San Francisco) and the World’s Parliament of Religions in 1893. Much of the early Buddhism (pre-1900) was Chinese but the turn of the century caused a shift, and the first fifty years of the twentieth century were dominated by Japanese Buddhism.2 The mid-late 1950s, however, and the Immigration Act of 1965 sparked more movement from Asia to the United States and, more specifically, more movement of Buddhists from Southeast Asia and Sri Lanka to the United States. 3 Cambodians mostly came in the early 1980s, along with other people of Southeastern Asian descent, coming from countries such as Thailand, Vietnam, and Laos, who brought Theravada Buddhism with them.

Rather than viewing Theravada Buddhism as a “coherent system”, Wendy Cadge sees religious individuals as “practitioners” who construct their own perspective to Theravada Buddhism through elements of their “everyday realities, personal or familial narratives.

The number of Buddhists grew rapidly with this new wave immigrants and refugees in the United States. Conversion to Buddhism increased as well, but there is occasionally a divide between white convert Buddhists and practioners for whom Buddhism is part of their ethnic identity. “Buddhism is Buddhism,” said Sophia Sour from Watt Munisotaram, but often there is little communication between different Buddhist ethnicities.4 This is true even amoung Theravada immigrants from Southeast Asia, there are separate Buddhist temples for the Thai and Lao communities in the Twin Cities metro area.

Rather than viewing Theravada Buddhism as a “coherent system”, Wendy Cadge5 sees religious individuals as “practitioners” who construct their own perspective to Theravada Buddhism through elements of their “everyday realities, personal or familial narratives, and an overarching national definition of Buddhism that is socialized in the practitioner from their background”.6  This approach is especially useful since Buddhism is generally more accretive and receptive to persistently adapt to “new local and national contexts”.7  The constant movement of people and ideas continuously shape religions across multi-national spheres. At Watt Munisotaram, a woman in her sixties, a docent of the temple, says she travels back to Cambodia once a year, always taking objects from America to Cambodia and gifts from Cambodia back to the States. She is also reminded of ideas and practices in Cambodian culture and Buddhism that are not present in Watt Munisotarm. So in addition to physical objects, she shares her experiences in Cambodia with the community at the Watt.8