Visakha Puja is a holiday celebrating the Birth, Enlightenment and Death of the Buddha. It was celebrated at the Watt on the evening of Friday, May 20 and during the day on Saturday, May 21 in 2016. What follows are photographs and observations from the Friday night event. 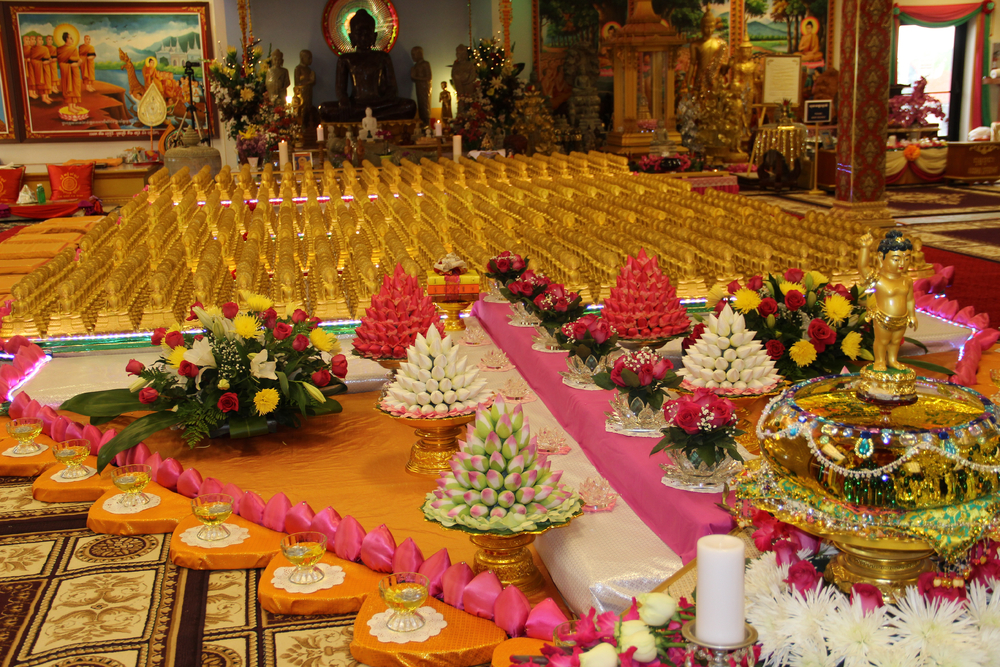 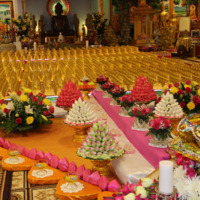 Buddha statues arrayed in the main temple for blessing. 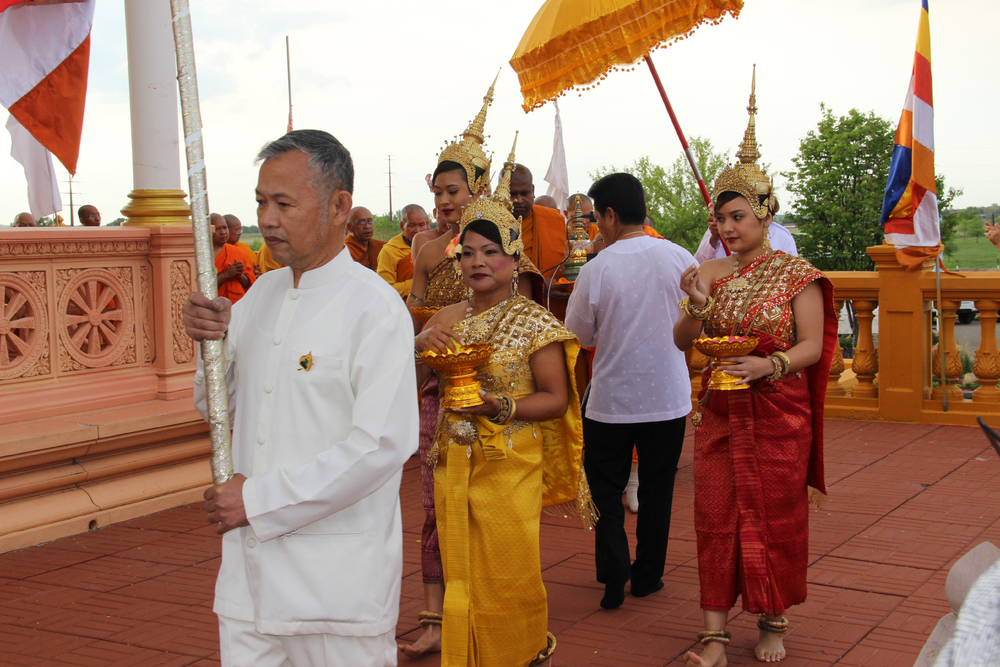 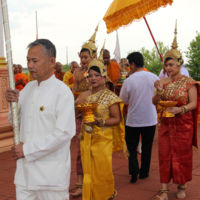 The procession around the temple. 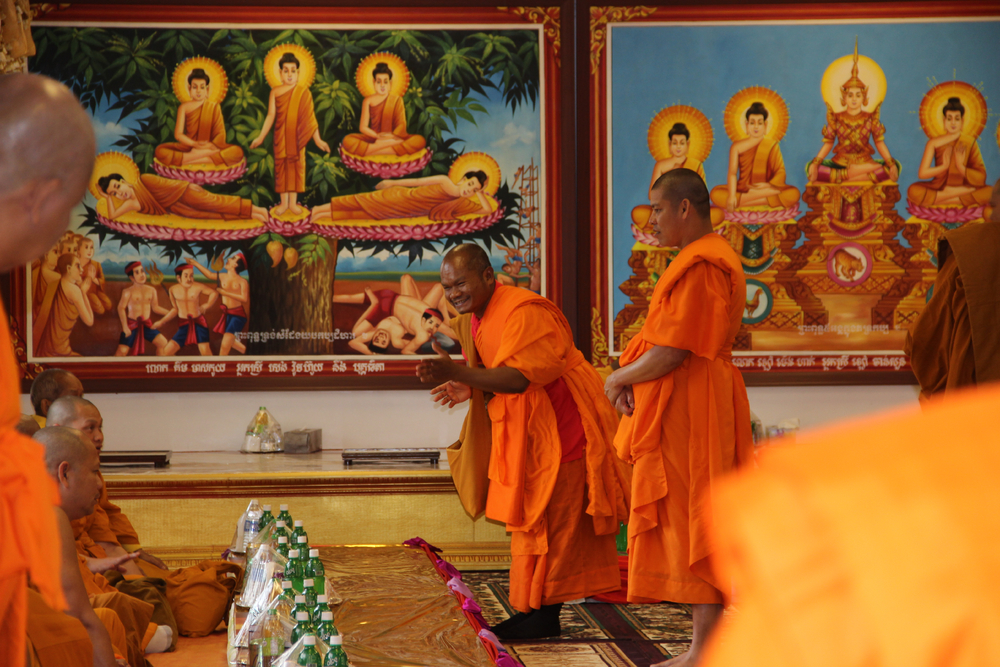 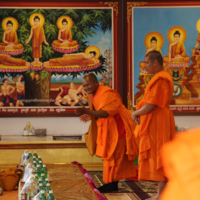 Ven. Vicheth Chum And Other Monks

Ven. Vicheth Chum and other monks at Visakha Puja 2016. 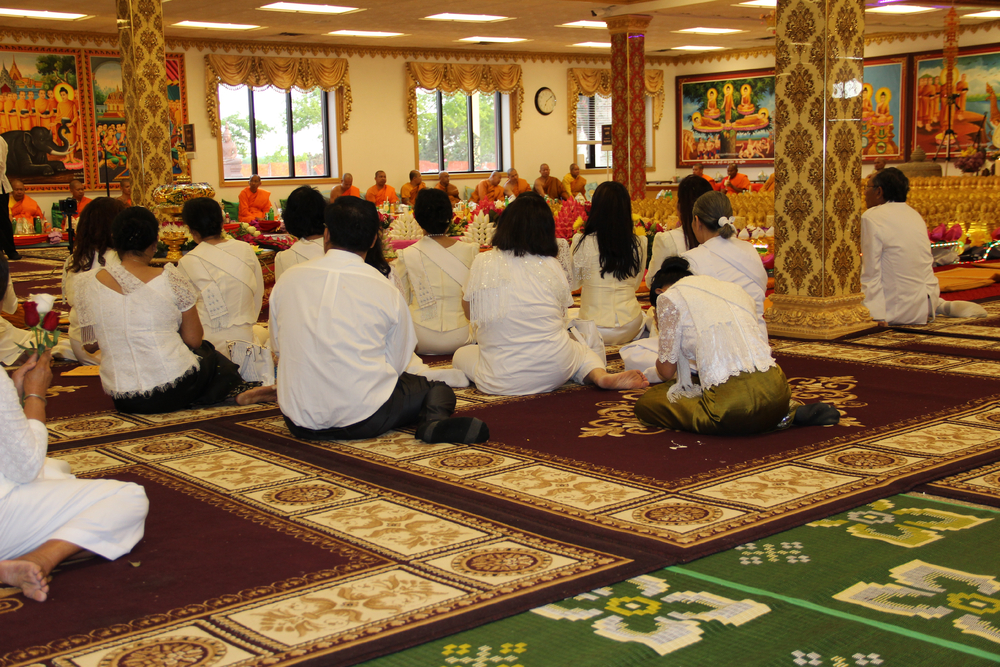 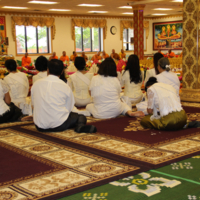 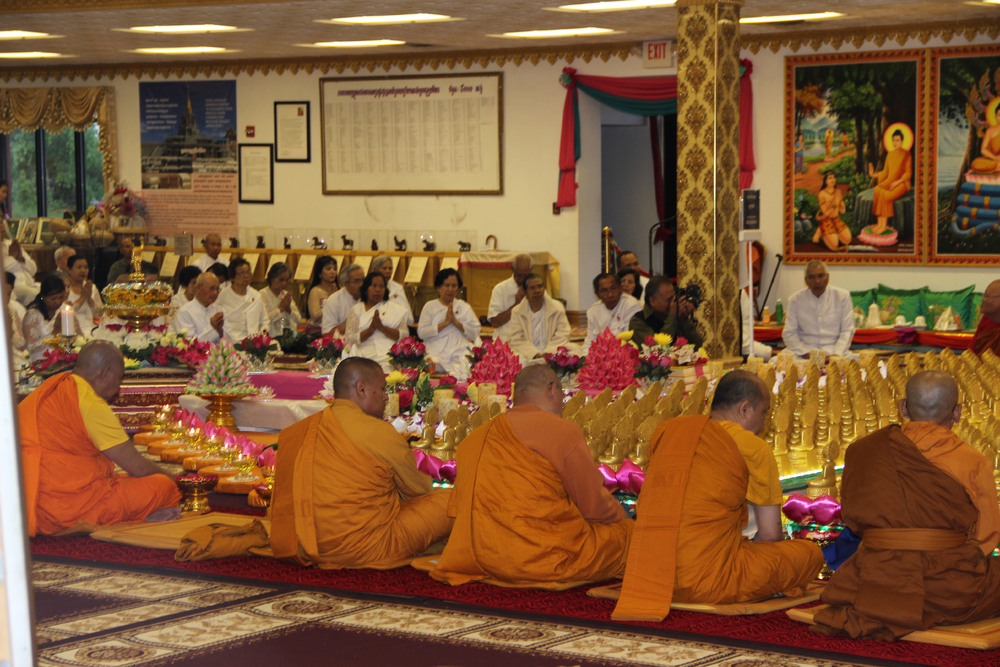 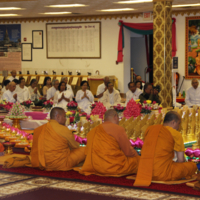 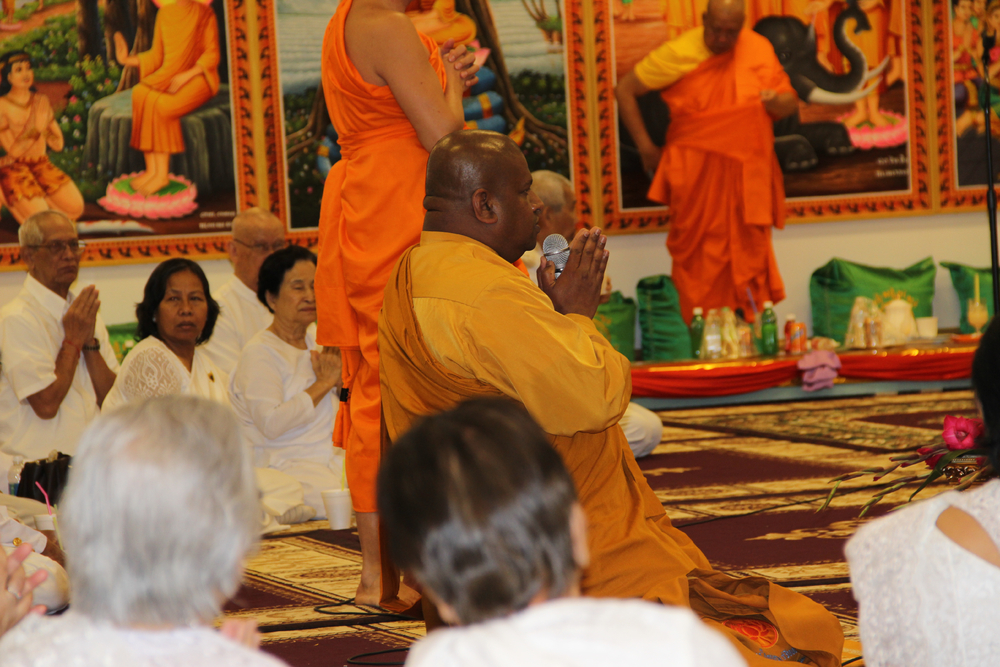 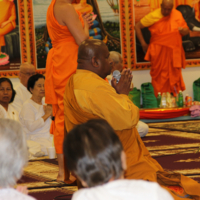 Unlike Khmer New Years, which attracts hundreds, if not thousands of visitors, Visakha Puja is mostly attended by just members of the Watt community. This is especially true of the Friday night service. About one hundred people were in attendance, but all were clearly familiar with the ceremonies conducted. The crowd was generally older, except for a few people with special roles in the ceremony. Most people were wearing white, including almost all of the women. A number of monks from other temples across the country were also visiting for the holiday. Including the eight living at the Watt, there were twenty-five Buddhist monks present.

The events started around 6pm with chanting in front of the southward outdoor Buddha. The event then moved to the upper room of the main temple. The monks occupied the part of the room closest to the altar. After a period of collecting three young women dressed in ornate traditional clothing entered, along with a pair of monks carrying the temple's Buddha relics. After a period of chanting and speeches, all in Pali and Khmer respectively, this part of the proceedings ended and all assembled trooped out of the temple.

Led by the three women, who were later described to me as the temple angels, the monks and lay people in attendance processed around the upper level of the temple three times. Bells were rung and chanting was played out of speakers. The procession eventually snaked its way around the temple through the main doors.

Inside, people rearranged themselves in a similar way, however all attention was focused on the 1000 Buddha statues that had been set up in the sanctuary. The monks brought the statues into the lower sanctuary to be consecrated before being installed in the Stupa the next day. The monks took up positions on either side of the Buddha formation, while lay people sat in rows nearer to the door.

After a break for the monks to eat, dinner was served to lay people. It consisted of rice and pork stew with fermented fish, chili, lime, and noodles on top. Everybody served himself or herself out of a giant communal pot in the kitchen. Towards the end of dinner, a group of middle aged women began singing in Khmer.

When most people had finished eating, the group settled down for the main portion of the ceremony. It included several long blocks of reading and chanting. Some sections were lead by a monk and others by lay leaders. While most of the chanting was limited to the monks present, some parts of the ceremony were call and response, with the audience repeating the words of the leader. This section of the ceremony went on for roughly an hour and a half. 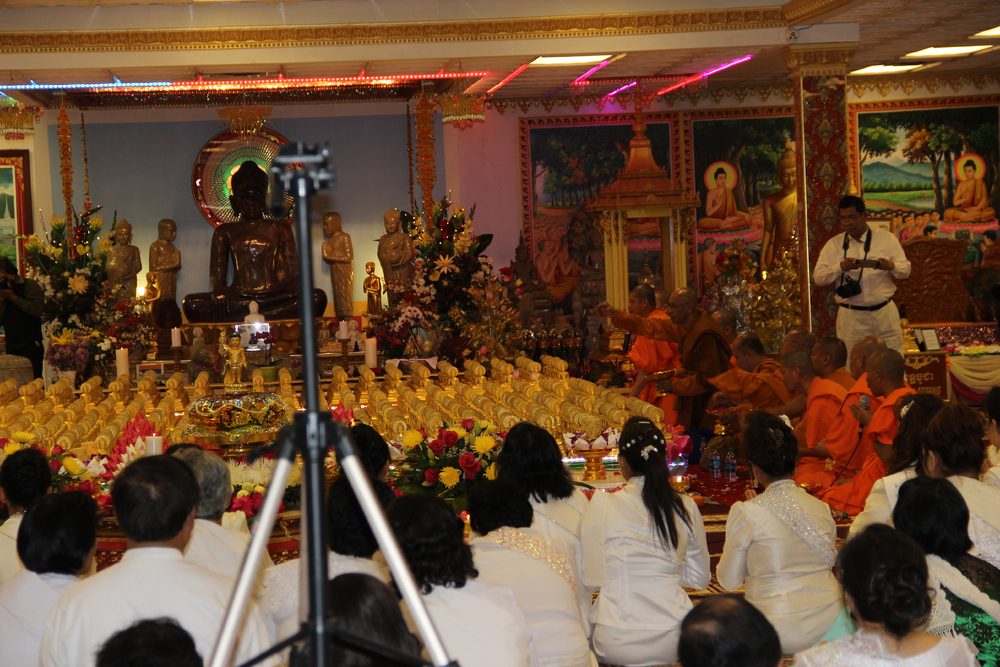 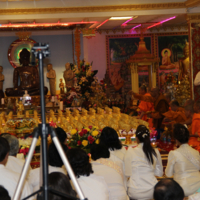 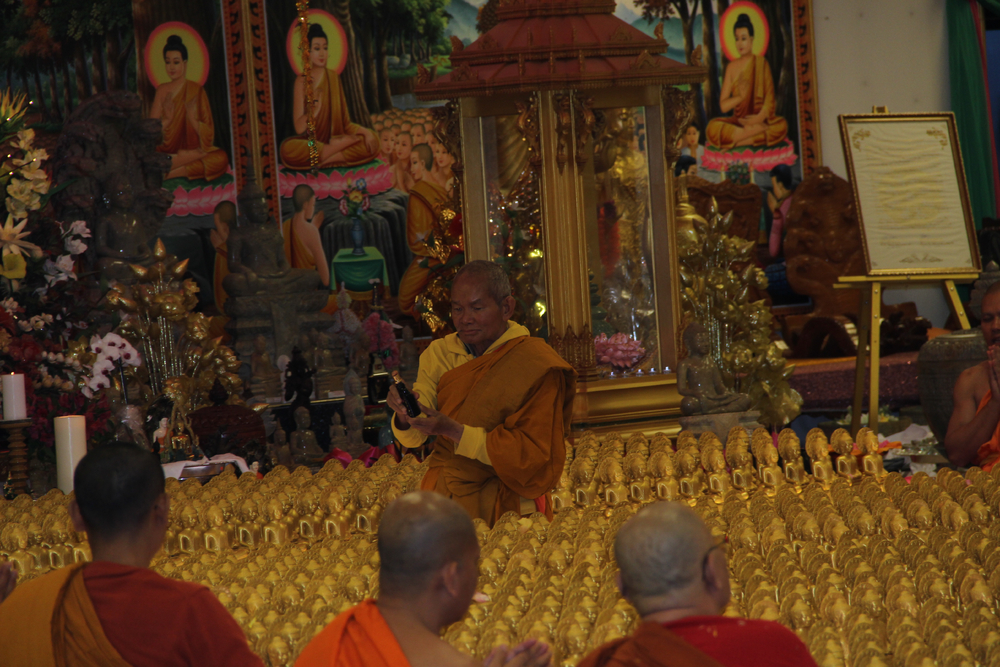 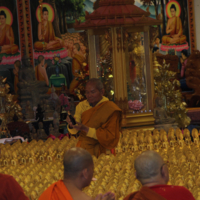 A monk spraying perfume on statues of the Buddha. 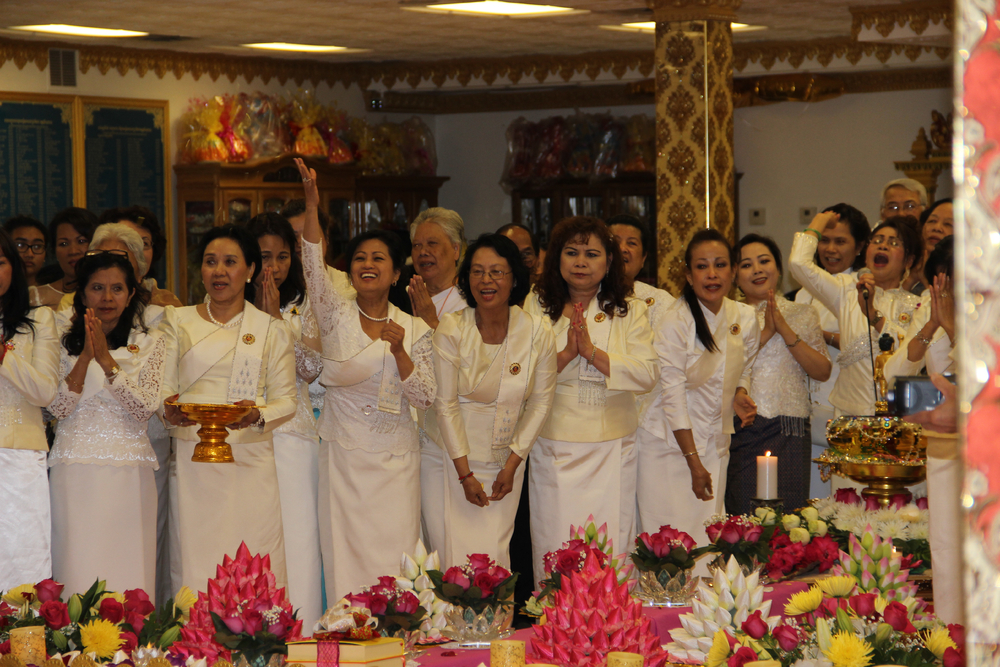 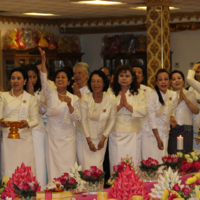 Women from the community throwing flower petals over Buddha Statues.

Finally, at the climactic point of the night, the Buddhas were blessed. While chanting, the assembled monks threw flower petals over the statues and sprayed them with perfume. The whole crowd was noticeably happy and excited for this part of the event.

After the blessing, a monk gave a speech in Khmer, with translation to English provided, thanking the donors to the temple for their generosity. Many people used the bathroom during this time.

For the last part of the blessing, the monks moved away from their stations around the Buddha's and allowed the women in attendance to take their positions. The men in attendance crowded around the altar in order to get the best angle to take photos of their friends and relatives. After some loud and raucous cheering, the assembled women of the community mirrored the actions of the monks and threw flower petals over the formation of Buddhas. After sitting still and quietly for several hours, this moment was a cathartic release for everyone in the room.

While one of the monks had planned to give a speech at this point in the night, it was abruptly called off. This might have been due to the fact that it was almost ten and most people were planning on coming to the longer ceremony the next day. During this period, the laypeople greeted monks and each other. Several families presented gifts to their parents and grandparents. A cold, strawberry, smoothie-like beverage was also available.

This part of the Visakha Puja celebrations felt much smaller and more intimate than other events that I've visited at the Watt. Most people in attendance seemed to know each other and to have known each other for many years. Similarly to going to church with my grandparents, it took almost everybody a good deal of time after the ceremony was over to leave, as everyone was busy talking with one another. Almost everything was conducted in Khmer, which potentially could haven been a barrier for second generation Cambodian Americans. While a few kids were present, there were probably less than five in total.