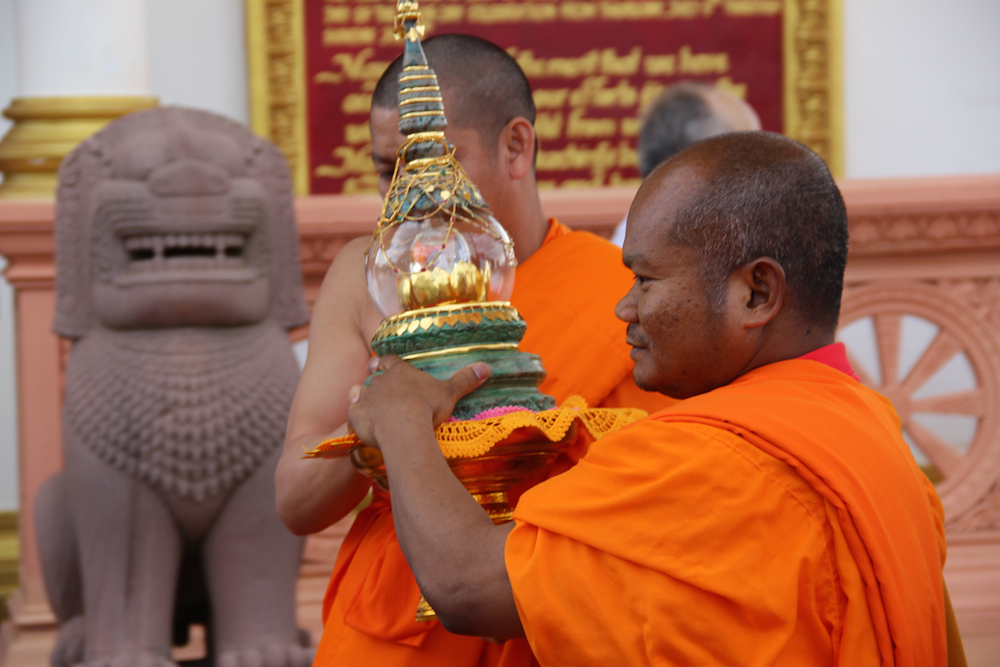 The Ven. Vicheth Chum carries relics of the Buddha during Visakha Puja 2016. 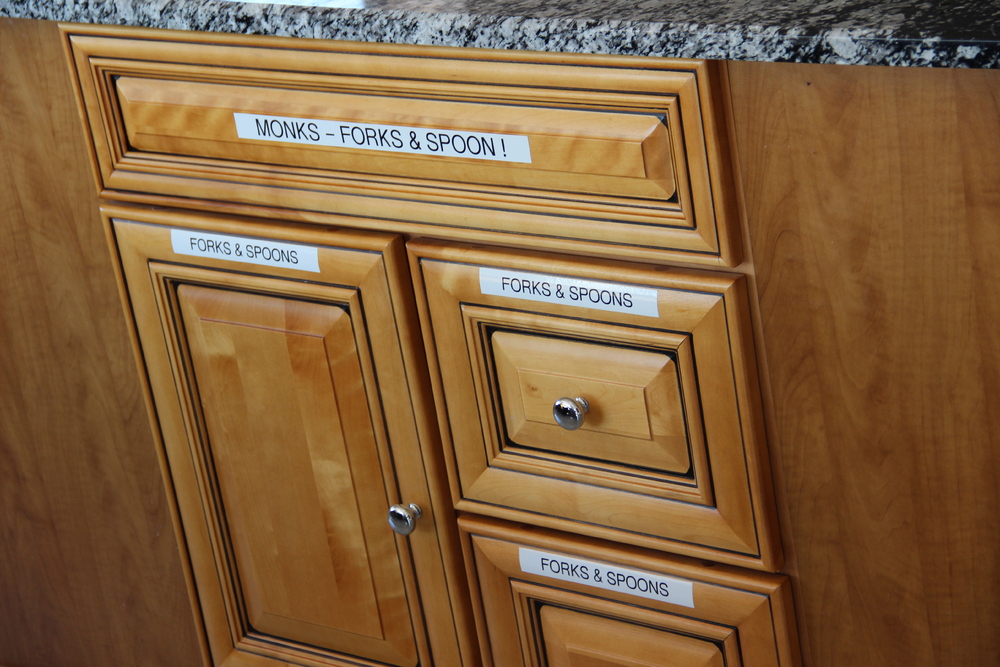 Make sure to only use utensils from the proper drawer to give to monks.

The Venerable Vicheth Chum first came to the United States in 2001.1 He had already been a bhikkhu (Pali word meaning Theravada Buddhist) for ten years when the Minnesota Cambodian Buddhist Society sponsored him to leave his home country. While he first arrived in Minnesota, he spent four years living with the Cambodian community in Fall River, Massachusetts from 2002 to 2006. He lives with seven other monks in the monastery at the Watt, three of whom arrived in 2016 from Cambodian and speak little to no English.

Since coming to the United States, Chum has been back to Cambodia three times, though he plans on returning again next year. When he does go, he often spends time building temples and doing other charitable work. He notes that it is far cheaper to build a temple in Cambodia than in the United States.

Watt Munisotaram was built almost exclusively with money from private donations. While the money for the main temple mostly came from donors in Minnesota, newer projects, like the Stupa have received a significant percentage of donations from out of state (roughly 35%).

Vicheth Chum's role within the temple has included assisting in religious ceremonies, as well as providing one-on-one spiritual counseling to community members, often in their homes. While the temple is most busy on the weekends, he has to work throughout the week making house calls. He describes himself as a doctor for people's mental issues, playing a complementary role to medical doctors. He offers his patients advice about how to correctly follow Buddhist precepts and live better lives.

Ven. Vicheth Chum Talks about day to day responsibilities as a monk.

"Our services our busy every day, mostly every weekend, Friday, Saturday, Sunday. People make ceremony in this hall. Sometime they invite us to their home for seven days or one hundred days up to [after] their family member passes away. Funeral home, hospital, nursing home or whatever they need advice from us. Need us to explain to warm up with their mind, their feeling, their problem, or issue. Either they get treatment from their doctor for the physical but we [monks] are Buddhist, we are the religious helper or worker. We help them with mental issue kind of stuff."

In addition to his work as a monk, in 2016 Vicheth Chum studied Human Services Management at St. Mary's University Minnesota in the Twin Cities. This major helps him with his role in the community. He took his classes in the afternoon, and the commute takes up a fair amount of his time.

He also practices several specifically Buddhist rituals everyday. He chants with his fellow monks in the morning, before they have breakfast, their main meal of the day. Chum practices meditation for half an hour to an hour a day. He says more makes his legs fall asleep, but notes that his master will spend four or five hours meditating.

Occasionally, Chum and the other monks will take on young men to live as monks for a short period of time. This is a common practice in Cambodia, but it is more difficult in the United States. While in Cambodia it was common to spend three to six months living in a monastery, in the United States, most people only stay for a weekend, and even that only on special occasion.

The rest of his day is spent assisting in various projects, often construction related, around the Watt, as well as giving tours to visitors. Once a year, Farmington High School will send school groups of up eighty-five students to visit the Watt. Students in these groups seem to have varying levels of interest in Buddhist teachings. Chum says "some have questions" and "others are just there for their class". These learning visits are important to Chum because they are general education. He emphasizes that "you need to learn from everybody, all communities around the world, I learn from Muslims and Hindus."

You need to learn from everybody, all communities around the world, I learn from Muslims and Hindus. —Ven. Vicheth Chum

When a family member passes away, it’s tradition for a living male relative gets ordained for a short period of time to “sacrifice, dedicate themselves, commit themselves to respect and show love to the family member that passed away. They just [get ordained] for a couple days or one week and then disrobe and go back to work."

When asked what Watt does to keep the Cambodian culture alive for the American-born younger generation, Chum replies, "that is what we always ask [ourselves]” and laughs. To keep the culture alive, "we think of the future, 20-30 years from now [in 2016], what we can maintain and keep our community alive and bright, that’s why we try to do everything so when we finish our construction [projects]".