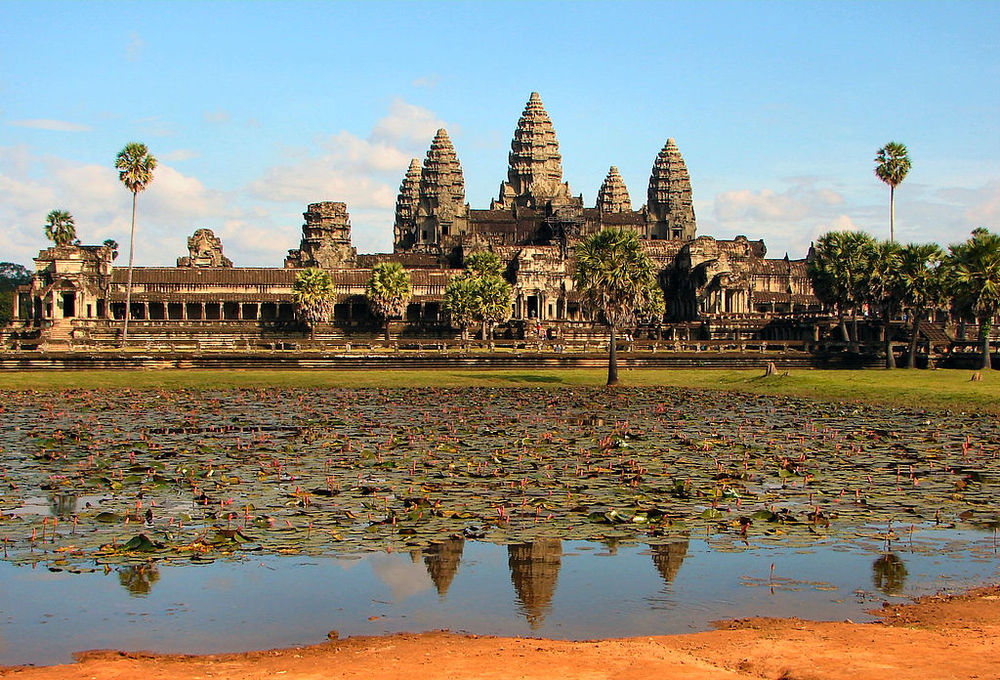 The front side of the main complex of Angkor Wat (from Khmer meaning Capital Temple). The temple complex is the largest religious monument in the world at 420 acres (0.65 square miles). Photo by Bjørn Christian Tørrissen.

The Minnesota Cambodian Buddhist Society is the end result of a chain of events stretching back to the life of the Buddha in the 5th century BCE. To give a clear and complete understanding of the context that it occupies, we'll have to look back nearly as far.

Theravada, the form of Buddhism the temple practices, developed in Southern India and Sri Lanka from the 5th through the 3rd centuries BCE.1 Its teachings and traditions spread across much of Southeast Asia and it remains the dominant form of Buddhism there. The Tipiṭaka or Pāli Canon, a collection of texts including many dialogs of the Buddha, is the central and common textual tradition within Theravada Buddhism. These were traditionally preserved orally, but have since been written down. To this day, chanting and memorization of Pali suttas remains an important Theravada practice, specifically among the sangha, community of monks and nuns.2  Traditionally, young Cambodian men have lived as novice monks before beginning their normal lives and careers.3  While members of the Watt Munisotaram community do occasionally become ordained, it is usually for much shorter periods of time than was typical in Cambodia (i.e. a week or weekend).

As Theravada spread across Southeast Asia, it interacted with and incorporated aspects of local religious traditions, including elements of animism. Spirits or Naek Ta are widely believed in and venerated playing roles in the arenas of ritual, and the construction and orientation of temples.4 In Cambodia, and Southeast Asia in general, the line between formal and popular religion is blurry.

Donations to monasteries and temples have been common in Buddhism in Cambodia and across Southeast Asia. Giving or paying for images of the Buddha is deeply respected and encouraged.5 It is seen as a way to accumulate merit, or credit toward a better reincarnation. 6  This practice can be seen at the Watt Munisotaram, where all construction is financed by private contribution and merit is frequently invoked. It is also common for monasteries or temples to possess relics of the Buddha. In many cases ownership of such relics elevates the status of a particular institution. 7  Stupas were often constructed to house these relics. In general, Buddhist temples in Cambodia depended heavily on donations to afford lavish art and architecture.

For more information on Theravada Buddhism or Buddhism in general, please visit The Pluralism Project website's page on Buddhism.