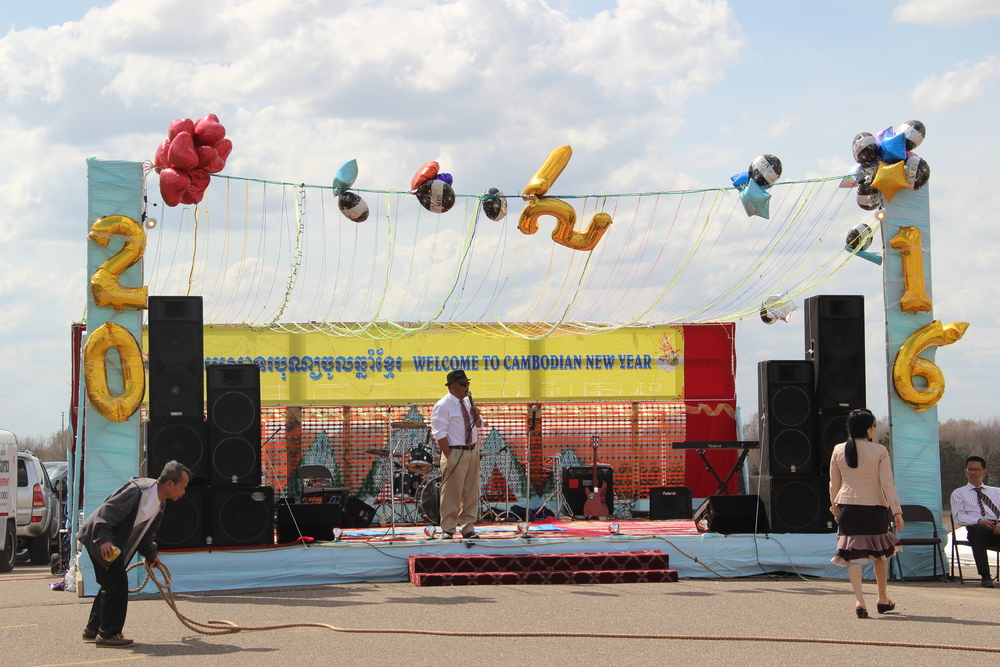 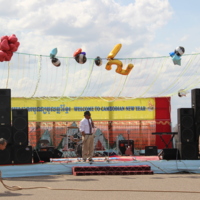 Man speaking in Khmer at the main pavilion of Khmer New Year while another man uncoils rope to be used for a tug-of-war competition.

This is an account of my visit to the Watt Munisotaram, a Cambodian Buddhist Temple in Hampton, MN on the evening of April 16, 2016. Earlier that day, a number of traditional rituals were conducted, but by the evening, the ceremonies had evolved into a large fair or party. Most people in attendance were Cambodian, though many people I spoke to pointed out that there were other Southeast Asians in attendance. This is a rough transcription of my field notes from the night as it attempts to describe the sights and spaces of the night.

The sun is starting to set as I arrive at the Watt. The front lawn of the temple, closest to MN route 50 is packed with cars, even though it was clearly not intended as a parking lot. The ground is divoted and the mini van I'm driving hops up and down as I try to find a space. Down a slight slope from the main temple, the parking lot looks kind of like a tailgate party. A family has put up a bug-proof tent. People look like they're picnicking. It's six o clock and cars are starting to flow back to wherever they came from.

As my companions and I start to walk up the hill towards the center of the festivities, one of them is asked to take a photo by a middle-aged couple. This isn't abnormal since tourists often visit the temple. Most of the time I visit I'm asked or offer to do something similar. The couple stands on the steps of a salaa, or open-air altar. Behind them is reclining Buddha the size of a large sedan. Even though a sign next to the steps asks visitors to remove their hats and shoes, the man still wears a baseball cap and both keep their shoes on. As we pass around the salaa, we move into a new section of the site. Standing on the pathway between the salaa the monks' dormitory are a group of younger men wearing expensive looking basketball sneakers, chains around their necks and the kind of snapback hats that add about two inches to the wearer's height. Twin Cities teams are popular, but I see a few Chicago Bulls logos. Everybody in this area is smoking.

The dormitory is quiet. A monk, the Venerable Vicheth Chum, later told me that he and his companions had spent most of the evening out of sight of the main celebration. Slightly further up the hill, the temple itself divides the property and event in two. On the south side of the temple is a large patio, with a number of statues of the Buddha. For the New Year, an altar covered with piles of sand was placed in the center. At this point in the night, this area is close to empty. There are a few individuals or small groups milling about, looking at Buddhas, taking pictures, relaxing under trees or buying food from the temple concession stands. The stand is staffed by a group of older women wearing white dresses crossed by purple sashes.

Permeating across the grounds is a throbbing, slightly muffled, backbeat. It originates from the north side of the temple, an odd paved stretch of land that's usually a parking lot and turning circle. Tonight, a stage has been erected, complete with stacks of speakers, a large banner saying “Welcome to Cambodian New Year” in English and Khmer and balloons in the shape of the numbers 2, 0, 1 and 6. On the stage, there is a band composed of several middle-aged men. They're a normal rock combo with a guitar, drum kit, and digital synthesizer (which figures heavily in much of their music). Their singer is a woman, somewhere between 30 and 50, wearing a long, ruffled and conservatively cut pink dress. She is singing in Khmer to a fairly standard blues-rock backbeat. In front of her, a crowd of between 50 and 100 people dance, ringed by a group of onlookers in picnic chairs. The age of the dancers varies; some are fairly young while others are middle-aged and older. Children run about the crowd and occasionally participate in the dancing. Most people dance in a similar way: in a couple, opposite from their partner, perpendicular to the band, moving slowly back in forth. This appeared to be the norm, although there were a few breaks for line dancing. Prowling through the dance floor is a man in a suit and sunglasses who is using a camera mounted in a special apparatus involving a metal ring to record the night.

Many of the men in attendance are similarly dressed. Most older men (older being roughly above 40) dress “business casual,” with polo shirts and button downs tucked into jeans or slacks. Some, like the temple president wear suits. The younger men in this area specifically seem to favor untucked button down shirts in flashy colors or elaborate stitching. Women's dress is more varied. Teenagers dress in a more standard American manner, while some adult women wear more traditional Cambodian clothing. Notably, at the brunch I visited the next morning, where most of those in attendance were active members of the temple, almost all the women wore traditional Cambodian clothing, including color-coordinated sashes. Sunglasses, specifically oversized styles, like aviators, are common among people of all ages.

Past the stage and dancing crowd is the concessions zone that feels like a fairground. Two rows of booths stretch across a cleared patch of sandy ground. My feet get dusty in my sandals as I walk past booths with signs like “Sugarcane drink” and “Papaya for you.” In the middle of the aisle, a large pile of garbage, dirty paper plates, empty cans and bottles, is being moved by a frontloader. Strips of sautéed beef on a stick and cups full of mango and spices are popular judging by what members of the crowd are holding in their hands. A statue of the Buddha surrounded by serpents sits on a pedestal in the middle of an excavation bigger than a baseball diamond. In a few years, this will be a reflecting pool.

Construction is also evident in other places at the site. The stupa, a tiered pyramidal structure of cast concrete, with the top course painted gold, is open, a change from the last time I visited. Scaffolding surrounds it and the railings of the patio haven't been finished. The stupa is west of the temple proper, and opposite from the main entrance. It's a little more isolated from the crowds and noise. Behind a pair of glass doors, the pushable kind you might find on the way into a convince store, lies another car sized reclining Buddha. The room is small, barely wider than the Buddha. The floor is carpeted, another shoes off zone. The walls are covered with cloth folded into a pattern of rosettes. Around the top, many brass statues of seated Buddhas sit in niches. I later learn that the 5000 are planned, and the temple hopes to have 1000 painted and in place by Visakha Puja this May. Three older people, two women and one man, dressed traditionally in white sit cross-legged by the feet of the Buddha. They speak to each other in Khmer and don't acknowledge me.

I wander around the patio to the main temple entrance. The atmosphere in here is totally different from the party outside. It's pretty quiet and there are no crowds. Most people in this space seem to come here often, except for a group of tourists who are asked, in English, to take off their hats. Sitting on a dais, a monk, who I later learn is the Venerable Vicheth Chum is speaking to an older woman, in a white dress kneeling before him. A few older men in suits sit around the edges of the room. I later learn that they are the temple leaders, and now they seem to be relaxing after the long process of organizing such a large event. 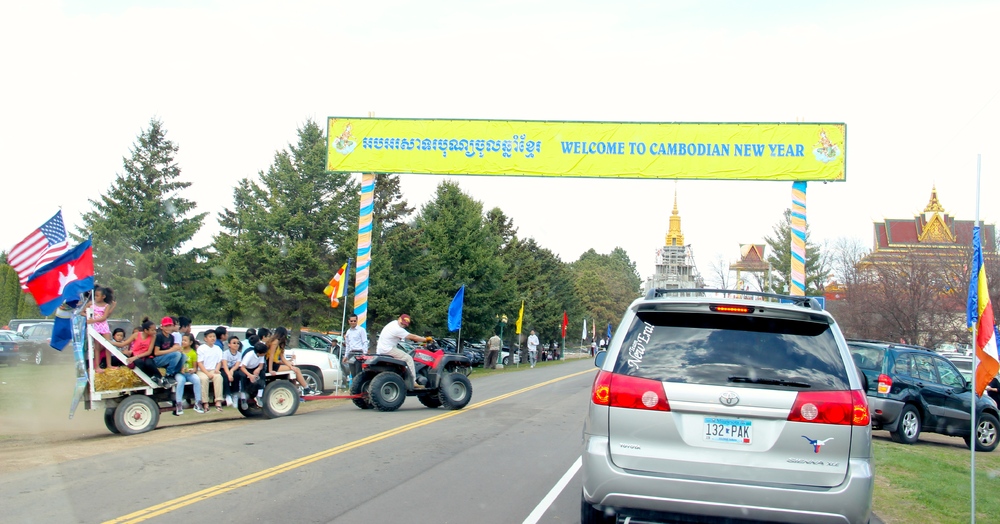 For entertainment, an ATV is attached to a trailer filled with hay so kids can have a fun ride around the campus during Khmer New Year. On the back hangs a poster for the “Khmer Minnesota Soccer Club” .

I turn onto Minnesota 52 and immediately am struck by how the back-up line of cars in my sight. On a usually empty road, there must be 30 cars patiently waiting to take the left turn into the Watt Munisotaram for Cambodian New Years. On this beautiful spring Saturday, people from across the state and the entire Midwest converge upon the Hampton Watt to celebrate with friends and family the coming of the New Year. After quite some time, I finally enter the Watt grounds but my next challenge is finding a space to park. Acres of green lawn are already filled to the brim with cars parked in rows and crazy angles. I traverse the bumpy terrain in my minivan and finally find a place to park next to the small pond. As I get out of my car and don my backpack and camera, two Cambodian boys are playing with wooden toy guns. BANG GOT YOU they scream, running wildly around the parking lot, hiding behind parked cars without a worry in the world, their parents most likely busy preparing a picnic lunch or playing music in the shade between parked cars. The smell of incense and cooked meat permeates the air, pulling me towards the gazebo and lawn area where countless families are having picnics and grill outs. Picnics with beef sticks, chicken wings, fried rice, sticky rice, papaya salad, fresh papaya and pineapple, wontons, baked eggs, bubble tea, iced fruit tea, and red bean dessert drinks. All these items and more are available for purchase behind the Watt where locals have set up food, clothing, and entertainment stands.

As I stroll up to the salaa, or open-air altar, an ATV attached to a trailer filled with hay, and kids, zooms past, music blaring and kids laughing. On the back hangs a poster for the “Khmer Minnesota Soccer Club” which got 1st place in the 23rd Annual Ancient Ranger Tournament in Blaine, MN. A woman dressed in all white lights candles next to the outdoor shrine of the Buddha while two kids climb on top of a sleeping Buddha while a white, male adult watches. It’s hard to tell whether this activity is frowned upon as no one seems to notice or care.

Many women colorful, traditional silk clothing with beautiful scarves and nice shoes while the men, if they are dressed nicely at all, often just wear western style shirts or suits. Some women and girls also wear fancy “western” dresses as well. A handful of very young kids are dressed up nicely but teenagers of both genders instead opt for jeans and t-shirts. Monks in full orange robes clash with shorts and baseball caps in a terrific display of clothing diversity. One man in a backwards baseball hat wears a shirt that reads, “I am Cambodian. I don’t keep calm.” Music plays from the pavilion where people mill around with their food and occasionally dance. I hear the familiar tune of “You May Be Right” by the Billy Joel except the lyrics are in Khmer. I may be wrong about this.