“We have intentionally kept the focus away from fundraising and work projects, good in the help they can provide, but tending to be “giving” by us Americans and “receiving” by the Mexican people. We have preferred to center on the development of personal relationships as brothers and sisters in the same family of God.” –St. Dominic’s Church: “Sister Parish” Mission Statement 1 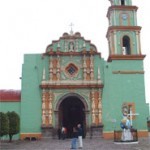 The “sister parish” relationship between St. Dominic’s church and San Pedro Apóstol in Maltrata, Veracruz is distinct from many transnational religious communal relationships because their bond is not merely symbolic— many St. Dominic's congregants are blood relatives with sister parish worshippers in Mexico. Improved technology allows community members to maintain contact with family in Veracruz, especially in Maltrata where 30% of the congregation was born (and surrounding communities within fifty miles of this small town where another 30% of the population was born).2 This migration pattern, and the strong connection between Northfield immigrants and Maltrata residents led Father Denny, former priest of St. Dominic's, to arrange a trip to the Maltrata once he realized that “there were probably with the kids easily 300 people or more from the same church in Mexico.”3  In February 2006, Father Denny and three other members of St. Dominic’s spent a week in Maltrata, visiting relatives of parishioners, and joining mass and other activities at the San Pedro Apóstol Church.  Upon returning from this trip, the two churches drafted an accord to make the communities sister parishes, “centering on the development of personal relationships as brothers and sisters in the same family of God".  When describing these first trips to Maltrata, the church website states:

In February of 2006 Father Denny Dempsey, accompanied by three other members of St. Dominic's, spent a week in Maltrata. They stayed with relatives of some members of St. Dominic's Hispanic community, joined at Masses in the parish of San Pedro Apóstol, met with groups from the parish, visited homes, and delivered letters and packages from relatives in Minnesota.  During the second visit in 2007, Fr. Denny and Padre Ernesto Ceronio, pastor of San Pedro Apóstol, signed an accord making the two churches sister parishes.4

Father Denny talks about his visits to Maltrata, Mexico.

These trips not only helped Father Denny establish official connections with the congregation in Maltrata, but also created an entry point through which he could better understand the community from which many of his Hispanic congregants emigrated.

During his stays in Maltrata, Father Denny also learned about the importance of hospitality, community, and food.  He was able to bring this insight back to the parish where he began to encourage congregants to develop more formal Hispanic cooking and fundraising events.  In order to raise money to send back to the San Pedro congregation, the Hispanic community began cooking tamales and other Mexican dishes to sell after mass to non-Hispanic worshippers. This cultural exchange of food helped integrate the Anglo and Hispanic communities.  Many Hispanic congregants consider this program the beginning of the integration of the two congregations at the Northfield parish.

In addition, St. Dominic’s School began to offer a mission trip to Maltrata in 2007 for middle school-aged students.  Until 2012, this trip was offered every two years, and approximately thirty-five seventh and eighth grade students and their parents traveled to Maltrata to meet with community members.  This trip also served the school’s goal of strengthening the international Catholic community.  The trip further integrated the two congregations in the Northfield parish, as students visited family members of St. Dominic’s Hispanic community.

When community members talk about the differences between congregations and customs at St. Dominic’s church in Northfield and at San Pedro church in Maltrata, the distinction in church attendance becomes apparent.  While there are approximately fifteen hundred Latino residents in Northfield, only around one third attend services at St. Dominic’s (or other religious institution).  In contrast, at San Pedro church in Maltrata, the majority of community members attend church regularly.  Many congregants also acknowledge that a growing number of Latino community members no longer identify as Catholic after immigrating to Northfield.

Norma is a middle-aged Mother of three children.  She has lived in the same small, four-room complex in Viking Terrace for many years.  She is very connected to both the religious and secular Latino Community.  When discussing the reasons that many Latino community members do not attend church she states:

In Mexico, the church is more, more respect, more tradition, more conservative.  You cannot skip a Sunday mass because it is a big sin.  You have to go to the church every week.  If you are Catholic, you have to go.  Being Catholic is more important in life.  As we would say, eighty percent of your person has to be there: your work, your money has to be part of the church.  But here [in Northfield] we are more liberal, more free: no one is obligated to go to church all the time or to be there every Sunday.  They don’t tell you that you have to be there: no one says you are letting God down if you are not there.  There is more freedom.  Anyone can go [to church] if they want to, but no one is going to tell them that they have to go…
The majority of the Latino people in Northfield don’t go [to church], and no one says to you, neither parents or other people, that you should, you need, to go to church.  And this is the reason that they don’t go.  Only about fifty to sixty percent of the Latino people in Northfield go to church…
We are around one thousand Latinos here in Northfield, and the church has around three hundred [Latino] congregants, no more.  It is a little sad to see this because sixty-five percent of us are from the same town, we know each other.  I see people who went to church more [in Mexico].  And here, because of the culture of this country maybe, they changed.  They changed the way that they think, they changed their religion.  Many people changed their religion, or they forgot their religion.  And it is sad to see how the culture of another country can affect our religion and our church.  In this culture, we also have to work all the time, and the people who have kids have to fight for them and take care of them, and so they don’t have time.  The way that we practice religion has changed…
I think that even though they have changed, they still maintain something of their old religion.  Even though they might have lost some parts of their religion, it is still inside of them.  There are similarities because the people don’t forget that religion exists.  Religion remains because they have had this religion since they were kids, since adolescence.  And there it is, the religion is still there.5