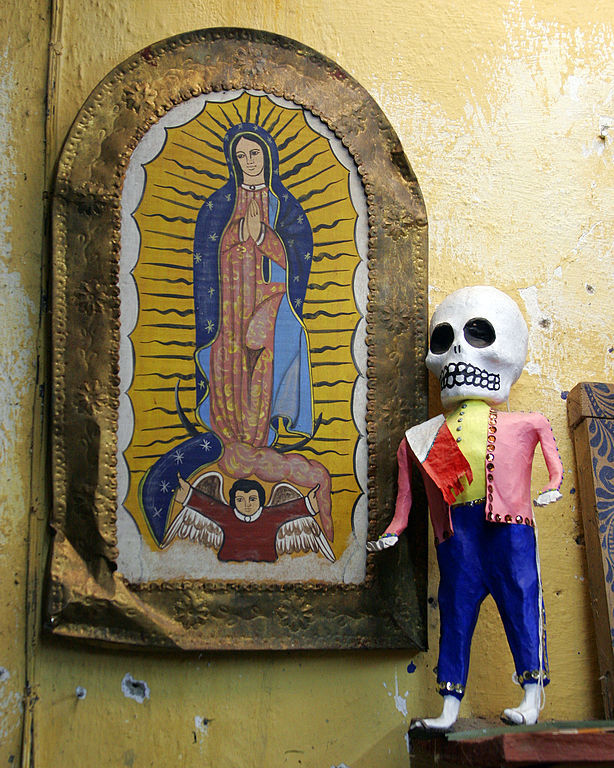 Mexican Folk Art depicting the Vigin de Guadalupe, an important religious figure, and a skeleton, a common Day of the Dead symbol.

In 1508, Mexico’s Spanish colonizing government declared its intention to: “support the exclusive establishment of the Catholic Church and financing the missionary effort among the native peoples.”1  This declaration transformed religious practice in Mexico, as Latino Catholics innovated new rituals and practices including the veneration of la Virgen de Guadalupe and Día de los Muertos. They sung new hymns that incorporated the history and legacy of indigenous tradition into European Catholic Mass and practice.  These distinct practices, which St. Dominic’s Latino community members practiced in Mexico, were eventually adopted by the Spanish-speaking congregation in Northfield.  Traditional celebrations such as Quinceañeras, a coming-of-age religious ceremony that occurs when a female community member celebrates her 15th birthday, and other events such as the celebration of the Virgen de Guadalupe on December 12th, and 5 de Mayo festivities are not only celebrated by Spanish-speaking community members, but are also some of the most well-attended events for both congregations.

The Hispanic community at St. Dominic’s organizes many different celebrations throughout the year including:

During these communal celebrations, cooking, dancing, chanting, cheering, abandoning all pretenses and truly enjoying the present with one’s community, are all seen as essential elements of Mexican tradition and religiosity. As such, the Hispanic community’s celebrations at St. Dominic’s, founded on these same principles of communal celebration, help congregants stay connected to their Latino (specifically Mexican) heritage.  By maintaining these Mexican/Latino cultural and religious practices in Northfield, congregants are also part of a greater transnational community, maintaining tradition throughout the world.

The impact of such celebrations, however, doesn't just affect the Hispanic community at St. Dominic’s.  These celebrations also build cross-cultural community within the church.  According to Anglo and Hispanic parishioners, Anglo community members attended Latino religious celebrations, eager to learn about new traditions and religious practices.  In a particularly telling exchange, one Hispanic community member was approached by an Anglo woman asking if she could set up an altar for her deceased mother during preparations for the Day of the Dead celebration.  Such instances of cross-cultural exchange and inclusive celebration have helped ease the acculturation process for both communities.  Many Anglo community members learn about, explore, and embrace new food, tradition, language, and culture.  Hispanic community members also begin to share their traditions with curious new participants – learning how to explain the ingredients in a Tamale, the significance of an altar/ofrenda for deceased relatives, and the importance of traditional folkloric dance.