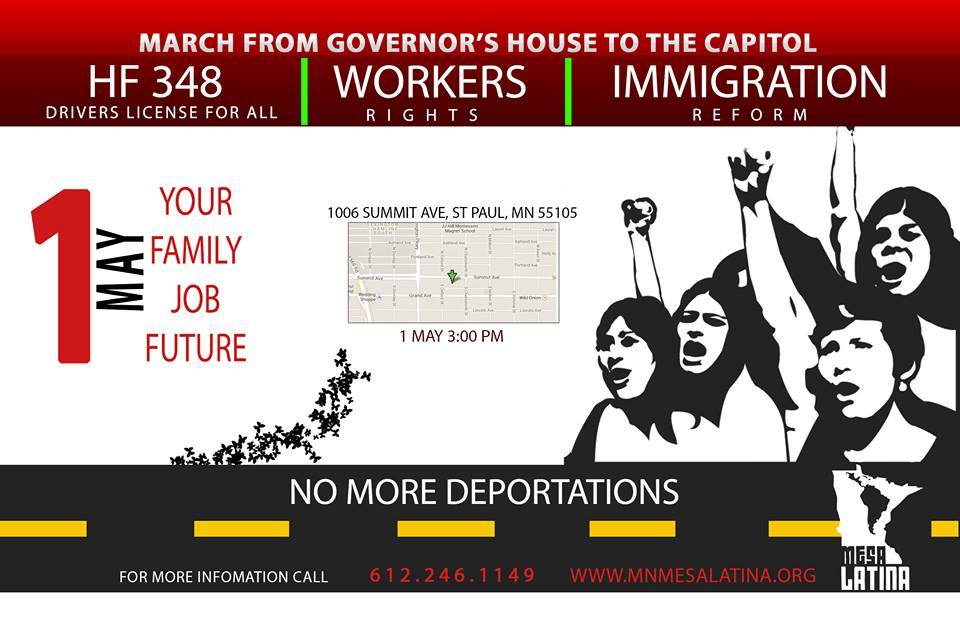 Flyer for March from the Governor's House to the Capitol: No More Deportation

Despite the structured Mass of the Catholic tradition, St. Dominic’s Sunday services reflect the unique transnational community which it continues to serve.  At the closing of the Mass, Father Denny, former priest of St. Dominic's, led a prayer for those who had recently passed away. During this prayer, the Father not only prayed for Northfield residents, but in a solemn voice also asked the congregation to pray for “the brothers and sisters who have passed away in Veracruz, Mexico.”

Other messages of transnational inclusion are evident in different Latino services.  During Good Friday in 2014, Father Denny led “the prayer for inclusion” and stated that this prayer was a call to unify all Christians, transcend international borders, and appeal for just international political authority.  This call for justice was also echoed in the prayers that the congregants lead:

Para nuestras familias aquí en Northfield, en México y otros países, que la misma fé nos consume… en todas partes del mundo rogemos al Señor. [For our families here in Northfield, in Mexico, and in other countries, with the same faith that we follow… in all other parts of the world, we pray to the Lord.]

This recognition of a transnational Catholic Latino community, and the call for just political authority was further evident after the formal service on Sunday ended, and congregants were invited to make community announcements.  During the service, as the altar servers made their way through the congregation, they not only collected donations, but also small notes for the Father, which congregants send in order to make an announcement.  Then, at the end of the service, the Father invited congregants to the podium to speak to their fellow worshippers.  While many of these announcements focused on promoting Mexican cultural events, such as the Cinco de Mayo celebration, they also addressed many of the problems that undocumented immigrants encounter.  Activist events such as rallies were publicized, as were church-sponsored educational events, in which other Northfield officials, such as police officers, spoke to congregants about avoiding deportation and other nuances of the judicial system for undocumented peoples.

We’ve had the chief of police here… it always helps to have a question and answer time with the chief of police. The chief of police also likes to do that too, to show the people that they really just prefer to help people… It [deportation and licensing laws] was all done in the name of security, but they actually make us more insecure…1