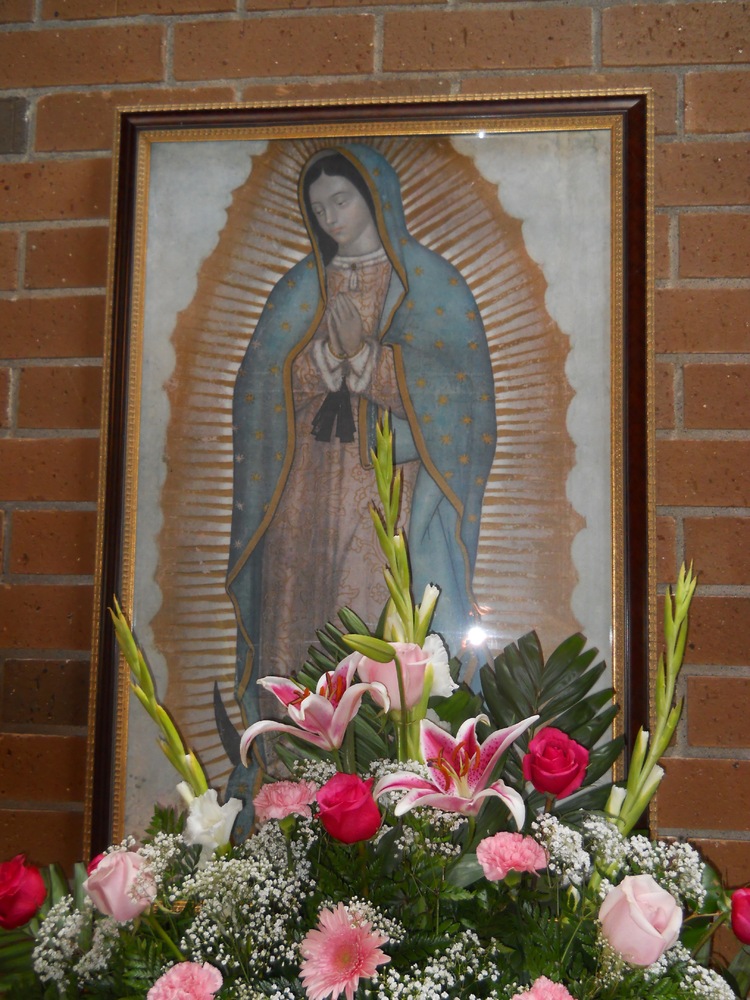 Image of the Virgen de Guadalupe displayed in the sanctuary at St. Dominic's.

Well, this is a celebration that happened a few months ago. It was on Thursday.  There is basically food and dance, and I think that food always brings people together.  Well my daughter is in the Mexican folklórico group, and that group of young kids was asked to come and dance, and so that’s also where you are reaching out to the community and asking them to come and perform.  There’s also an Aztec dance group, and they came to dance. You have mariachi too...And I think that it's amazing... and it was a very successful event.1

The mingling of indigenous Nahuatl and Roman Catholic practice and theology in the figure of Guadalupe and the rites honoring her assert the unique blending of tradition in much of Latinx Catholicism.  According to Vatican accounts, on December 9, 1531, Juan Diego, a Mexican peasant living near what is now Mexico City saw an apparition of a young girl on a hill near his home. The girl, speaking to him Nahuatl, asked the peasant to have a church be built in her commemoration.  Juan Diego eventually realized that this girl was the Virgin Mary.  Shortly thereafter, Juan Diego went to talk to the Spanish Archbishop of Mexico City, Fray Juan de Zumárraga.  Zumárraga told Juan Diego to return to Tepeyac Hill for a sign to prove that the apparition was actually the Virgin Mary. When Juan Diego returned to the hill the Virgin told Juan Diego to gather flowers. After gathering Castilian roses, not native to Mexico, Juan Diego returned to the Fray. When he arrived at the Fray's doorstep, Juan accidentally dropped the roses which fell on his mantilla (cloak). But, when he opens his cloak, the flowers appear as the image of the Virgin of Guadalupe.  Today, the mantilla is located at the Basilica in Mexico City, and many Latinx (and non-Latinx) Catholics travel long distances to visit this holy site.