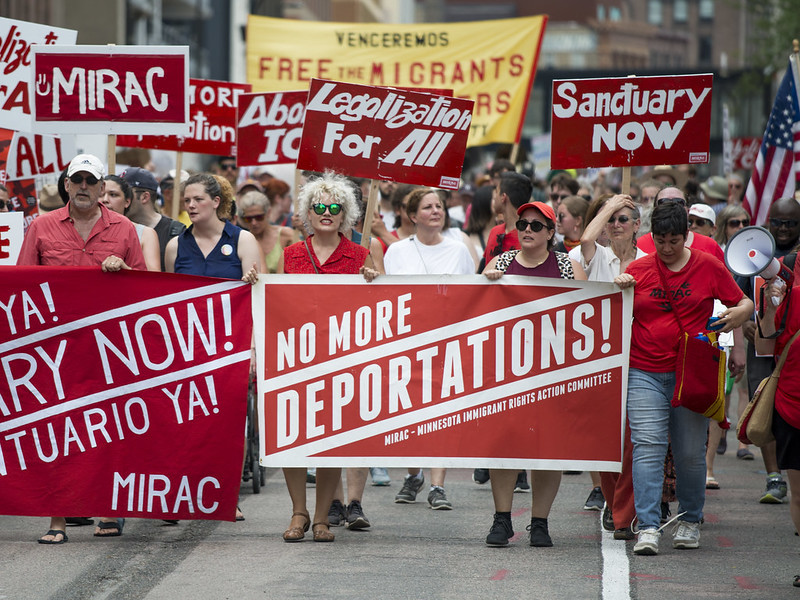 In the 1980s, beginning with Reverend John Fife of the Southside United Presbyterian Church in Tucson, Arizona, and Jim Corbett, a retired Quaker rancher, churches began to demand their right to provide “a safe-haven for undocumented refugees fleeing from violence and persecution” in Central America.1 This demand led to the popular movement now referred to as the Sanctuary Movement, a “movement that combined religious faith and social activism in confronting unjust government policies.”2 Taking a stand against Cold-War politics – and the Reagan administration’s support of “anti-communist” dictators in Guatemala, El Salvador, and Nicaragua – churches across the country, especially in California, declared that religious institutions (and in the case of Berkeley, California, the whole city) were sanctuaries or “safe-havens” for migrants from these war-torn and unstable countries.

This radical declaration sent a powerful message to the U.S. government and the American public.3 By welcoming refugees and working to raise awareness and share the stories of those who had just arrived from Central America, religious institutions were inadvertently calling on the government to act on these individual’s behalf:  to work to end conflicts, and to revoke support for oppressive dictators.

Religious institutions continued to provide the sanctuary and activism so many undocumented immigrants from Central and South America sought.  In an interview with one undocumented Catholic living in Minnesota, they reflect on their experience:

I do believe that --------- church is very supportive in the immigration reform activities, the church really embraces the Latino immigrant community. Since I move to -------- I have seen the church and church members active in rallies and other activities for the immigrant rights.  Immigrant workers are more vulnerable of being exploited and not paid for their work, they often live in precarious housing, have less ability to denounce a crime to the police, deal with racial profiling, being deported and losing their families.

Churches and religious institutions throughout the country have also resisted some of the most contentious immigrant raids since the start of the Sanctuary Movement.  One immigrant recalls:

During the Postville, Iowa raids in 2009, the only safe place for the immigrant communities to be was the churches.  The same is true after raids in Austin and Worthington here in Minnesota.

With such bold resistance and religious-based activism, religious institutions have also helped foster the next generation of community organizers.  Undocumented immigrants found a supportive community within diverse religious institutions, giving them the resources and leadership training they need to stand up and demand reform.  Such was the case with one motivated young woman was bold enough to share her story.  When discussing her reasons for jeopardizing her security and organizing rallies and other events aimed at achieving immigration reform with the church, she stated:

As a political activist and organizer, I want to help create sustainable, healthy and politically active communities and neighborhoods with members who have equal access to essential resources. To strengthen diverse communities, ensuring all members can participate in shaping the institutions, laws, and policies that affect them.  To increase youth and parental leadership in schools, communities, and neighborhoods. To eliminate discriminatory practices that consistently exclude communities of color, poor people, women, and immigrants from domains of full citizenship and that undermine their economic, social, and political mobility.