Simplicity, community, and ritual characterize the English mass at St. Dominic’s.  As parishioners enter the chapel, they are greeted by familiar hymns, and quickly start singing along with the slow, mellow music. The service officially begins as the priest purposefully walks down the church’s central aisle to the altar followed by altar servers who help carry out the mass and prepare the sacrament. These altar servers are children of various ages, all of whom are students from the faith formation class who have volunteered and passed a test to do this important job. Sometimes this group includes one of the two deacons of the church who help set up the altar. 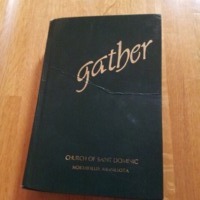 The hymnal used at St. Dominic’s

Before mass officially begins the sanctuary is quiet, as the congregation sits or kneels at the wooden pews. Each pew has a shelf that holds copies of the “Gather” Hymnal, containing songs and readings for each mass. There is also a laminated white sheet with the updated translation of the Roman Missal, introduced in 2011, and still unfamiliar for some Catholics.

The mass, called the liturgy, is prescribed by the Catholic church. The first part of the mass includes Bible readings by the lectors, songs by the choir, and a homily from the priest. Ushers also walk down the aisles with baskets to collect money for the church while the choir sings. Only the topic of the homily and bible passages read each week vary, and the rest of the mass ritual is identical at St. Dominic’s and at all other Catholic churches.

Before communion, prompted by the priest, all members of the congregation shake hands with other congregants reciting the phrase, “Peace be with you”.  Sometimes the priest will descend from the altar and greets parishioners in the front pews. Afterward, there is the blessing and consecration of the host, and the congregation walks to the front of the sanctuary to take communion. There are three communion stations at the front of each aisle, and the congregants methodically file out of their seats from the back pews toward the front.  As people return back to their seats, some walk quickly, some walk slowly, while others put their arms around their loved ones and stop walking for a quick moment before strolling quietly back to their seat.

The mass closes with community announcements, which can include church events as well as other activities in town. After announcements, the priest and the altar servers carry the sacred objects out of the sanctuary.