Father Denny reads the scriptures in the Spanish mass.

From Quinceañeras and religious classes to wedding ceremonies and youth group oraciones [prayer], the rituals, hymns, and strong community that is fostered through Hispanic Sunday and Thursday Mass at St. Dominic’s lays the foundation for all other communal activities. This weekly practice of worship—characterized by prayer and animated by a feeling of communal interdependence and resilience—both nurtures and embodies the values that the Hispanic congregation strives to incorporate into all aspects of religious life. 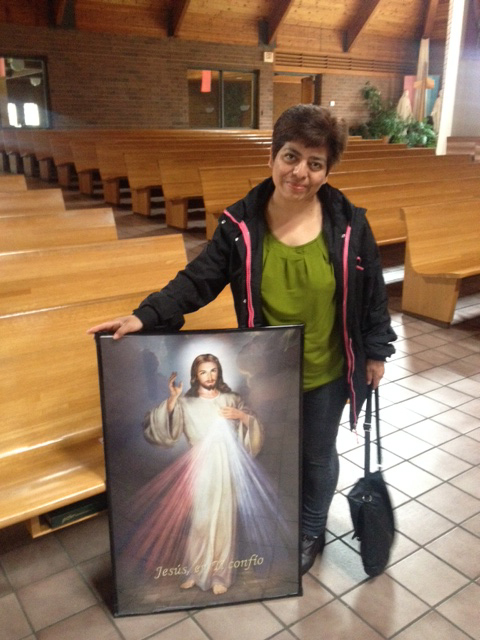 Congregants bring religious images to Mass to be blessed by the Father. 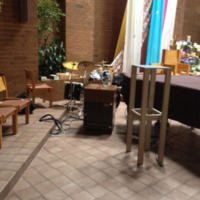 Instruments used by Latino musical ensembles use during the service.  They include: drums, piano, maracas, guitars, and tambourine. 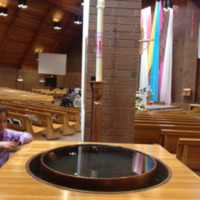 Holy Water that worshippers apply to their foreheads in the sign of a cross as they enter and leave the sanctuary. 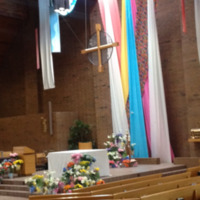 The altar is adorned with colorful flowers and many different interwoven cloth fabrics. 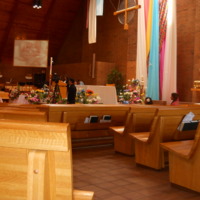 View of the altar from last pew in the Sanctuary.

In March 2014, we observed Spanish mass at St. Dominic's. On Sunday, at around twelve thirty in the afternoon, as about one hundred and fifty congregants walked into the sanctuary, they were greeted at the entrance of the church by an usher. The ritual greeting was the same for both early-birds and latecomers, as the usher looked congregants in the eye, offered his hand, and repeated “Buenos Días, Bienvenidos” [Good Morning, Welcome].  This hospitality was further evident as Father Denny, former priest at St. Dominic's, and other congregants mingled before mass in the social hall adjoining the chapel. Although dressed in his simple, loose-fitting ceremonial white robe, Father Denny greeted congregants informally with a loose handshake, asking them about their week: about school, long hours at work, and relatives back in Veracruz.  As more congregants made their way into the church at around 12:35pm, the formal service began.

While mass follows a universal structure, the Hispanic mass at St. Dominic’s seemed  informal.  As Father Denny delivered the homily, he descended from the pulpit and delivered his message to the audience while walking up and down the center aisle of the chapel. Through exaggerated hand-gestures and informal colloquial language, he attempted to make the sermon more interactive asking the congregation questions such as: “What would the jóvenes [young people] do?  How do you get to Target, explain to me how you get there?” 1 Through this concrete and interactive method the message of his sermon became clear: God guides us in all endeavors. As Father Denny further clarified, whether we are young or old, God guides us towards our destiny. 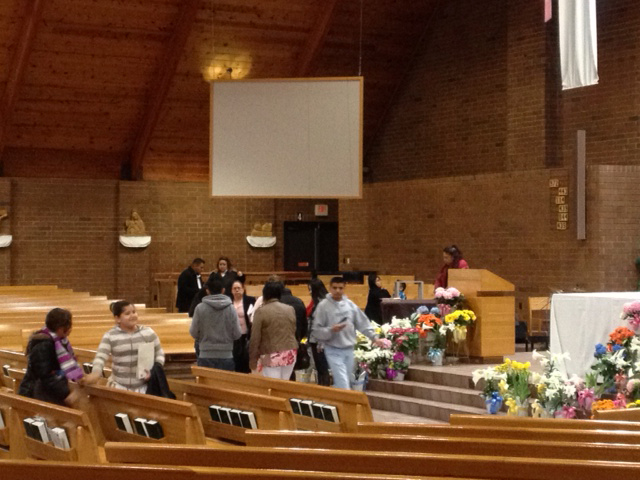 View of the Chapel along with the projection screen heavily feature in mass. A alternative to prayer book that is being adopted by many churches including St. Dominics. Prayers and hymns are followed from these screens rather than books.

According to Latino community members, this emphasis on collective response and engagement was also part of the reason St. Dominic’s began using a PowerPoint projector during the service. Instead of offering prayer books to Spanish congregants, worshipers followed along with prayers and hymns on the screen that hangs from the ceiling behind the choir, a practice which mimicked new norms in many Protestant, particularly Evangelical, churches.  As new songs were sung and new prayers recited, the screen was continually updated through a projector room located above the pulpit.

The congregation was engaged during the service, singing hymns and reading along with the priest and other congregation members during prayers. While being called upon to renew their Baptismal promises, for example, the community recited together in unison the phrase “sí creo” (Yes I believe), demonstrating both the shared focus and unity that this community values.  In the middle of the service, the congregants were also encouraged to “compartir la paz” (share a sign of peace) and shake hands with fellow church-goers not only in the aisle they were sitting in but throughout the church.  Both children and adults seemed to go out of their way to shake hands with other congregants, walking around the chapel to visit friends and “share a sign of peace.”

There was also time for personal reflection during the service. Norma, a devout mother of three, described her experience in the service:

“I like the moment when the pastor says the prayers over the bread and the wine.  I like it because the silence makes you think.  I like that moment or prayer… But the songs are also beautiful.  I close my eyes and I am pensive… it is a beautiful experience.  When I hear each word as they say them, how do I explain it, it is real, it raises you to a state of meditation or something like that…”2

After the formal service had ended, Father Denny called up community members to make announcements, and the strong sense of community was further evident. As community members mounted the pulpit and spoke confidently into the microphone, they called on their fellow churchgoers for a variety of different causes: to help prepare for the Cinco de Mayo celebration at the Middle School, to participate in a rally for immigration reform in the Twin Cities, or to contribute to a Spanish library that some community members have created at the church.