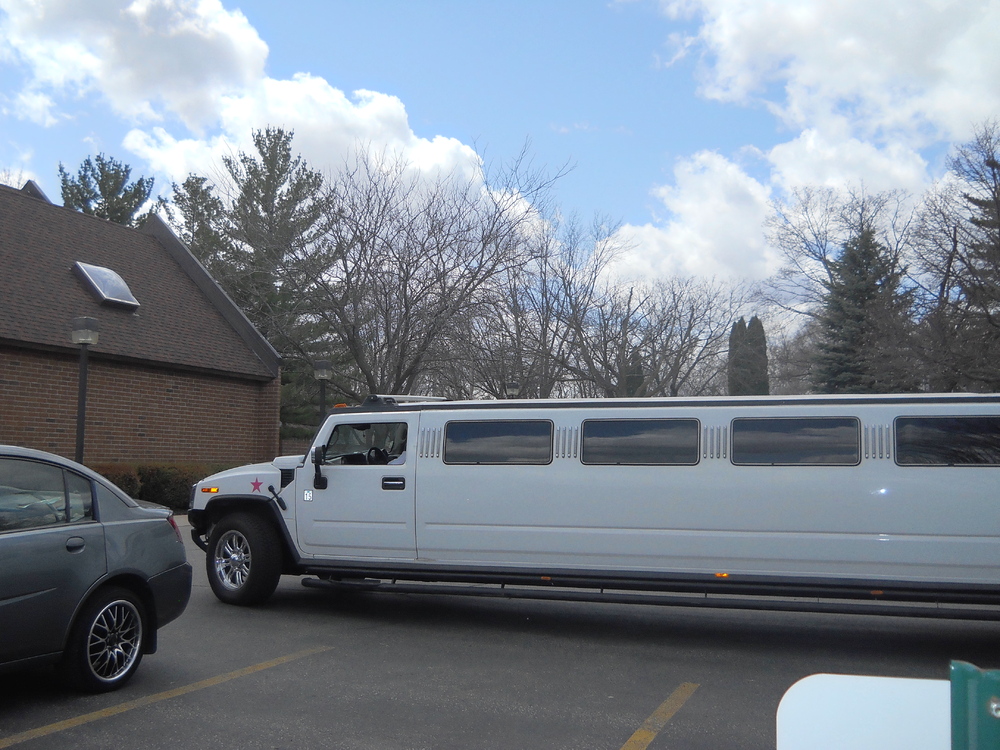 Limo to bring the Quinceañera and her Chambelan from Mass to her party.

The Quinceañera tradition is imbued with cultural and religious meaning. It is a tradition that has come to transcend national boundaries and is so important to its practitioners that they are willing to sacrifice time and money in order to maintain this meaningful right of passage.

As a young girl in the Hispanic youth group at St. Dominic’s explains her excitement for her Quinceañera (which was planned for September 2014), she sits up straight in her chair, uncrosses her arms, smiles, and says: “I cannot wait to share this tradition with friends.”  She then begins to explain further that while this celebration is expensive, the benefits outweigh the costs.  Being able to maintain Mexican tradition in the United States, to share one of the most important rights of passage for young, Latina women with family and friends (many of whom have never been exposed to such cultural practices) makes the monetary cost more than worth it for many. 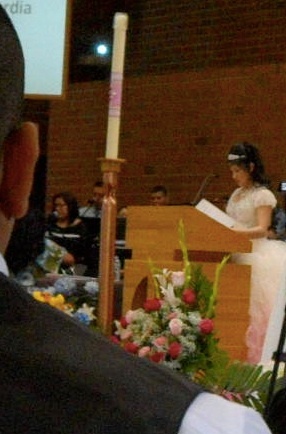 Quinceañera leading a prayer during Mass.

The ceremonies begin with a Mass.  During the service, the Quinceañera (the young woman celebrating her 15th birthday), dressed in an extravagant (usually floor-length) dress and wearing a tiara, takes a lead role in the Mass.  She sits in the first pew of the church with her family, leading prayers and taking communion before any other worshippers. At St. Dominic’s there are often two or three photographers at the service, who hastily snap photos from either side of the pulpit throughout the hour-long mass.

After the service ends, the Quinceañera and her chambelan (court), a predetermined group of teenagers who are friends with the Quiceañera (equal number girls and boys) in matching dresses and suits, make their way out to the parking lot where they are driven to the party.  At the party the court performs a few dances that they have practiced for weeks before the event, concluding the formal celebratory rituals.  The guests, court, and Quinceañera then enjoy the rest of the night eating, drinking, dancing, and celebrating together.

"These are good girls either way, but I really give credit to the ones who can look and say you know, my family really can’t afford it.  As much as I would like to have my big party, my big moment, there are girls who are saying it’s okay to do something simple because there are going to be other things in the future. That’s really neat when they can do that, but there’s a lot of pressure I think."

While Father Denny, former priest of St. Dominic's, holds the Mass for the eight to twelve Quiceañeras in Northfield each year, he explains some of his reservations about this celebration.  Many congregants share these same criticisms:

The unfortunate part from my perspective is that it’s kind of like a pressure that you have to have this whole blown out thing, and these poor families have to be able to put down four to six thousand dollars for a fifteenth birthday. Then with the hope that she’s going to want a car and a college education it's a heck of a sacrifice…

Despite such criticism, however, the Quiceañera celebration remains one of the most revered Latino traditions at St. Dominic's.