The pioneer Catholics of Northfield, although few in number and comparatively poor, were strong in faith and generous in the spirit of sacrifice. They wished to have a church in which to worship God in a more befitting manner.   – W.F. Schilling, Historian, Northfield, MN 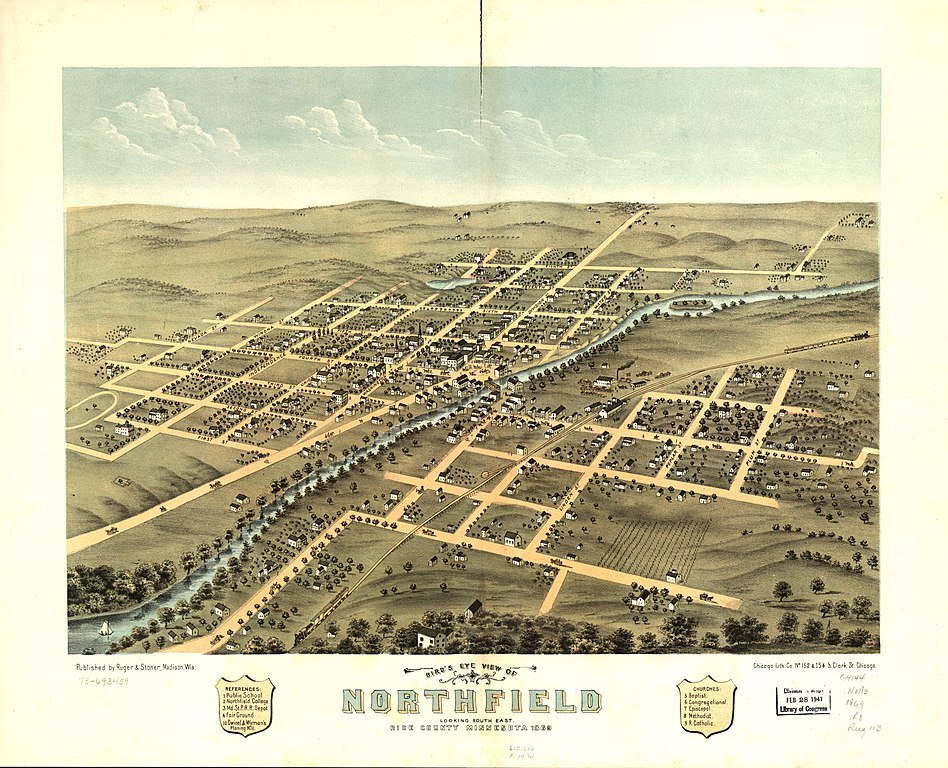 Northfield in 1869. St. Dominic’s is located at the bottom of Linden Street.

The Cannon River Valley is on the traditional homelands of the Dakota people.  Before European settlers arrived, the area around Northfield was inhabited by the Wahpekute Dakota.  Ceded in the Treaty of 1851, the area was initially settled by Anglo-Americans.  Carleton College was founded in 1866 by Congregationalists. Later, families of German and Irish descent settled in Northfield, followed by an influx of Norwegian settlers twenty years later. In In 1874, Norwegian Lutherans founded St. Olaf College to foster religious values in educated young people.

In the early 1900s, another wave of immigration profoundly influenced the community as Czech Catholics settled in the area.  Soon thereafter, many new Catholic churches were constructed.

The most recent wave of immigration occurred in the 1990s as Mexican and other Latino/a migrant workers settled in Northfield for jobs at the Right Way packaging plant, Malt-O-Meal factory, and area sod farms.1  As of 2010, an estimated 8.4% of current Northfield residents are Hispanic or Latinx. There are twenty-two established religious institutions in Northfield, not including religious groups at either Carleton College or St. Olaf College.  Such breadth and diversity reflect the history and legacy of immigration in Northfield.

St. Dominic’s is as dynamic as its congregation, having undergone many changes and reforms in its more than 150 years of existence that reflect profound changes within the small, rural town and the larger Catholic world.

Four years after Northfield’s founding in 1854, Father Anatole Oster celebrated what would come to serve as the town’s inaugural Catholic mass in the home of Timothy Gleason on the Dodd Road, near Chub Creek.  In the following years, mass was celebrated each Sunday when Reverend George Keller showed up in town on horseback, traveling over dense prairie land to teach children and administer the sacraments in the homes of local Catholics. Mass was celebrated in this way for over a decade. As Schilling recounts in his published works:

In about 1867, Dominic Moes, Patrick Murphy, and Robert Halford visited the other Catholics of the community and found them not only willing but eager to help with the good work. Those who had money gave with a generous hand; those who could not contribute money promised labor and material. These three devoted men, having finished the work of visiting the people, called on Bishop Grace of St. Paul, and made known to him the desire of the Catholics of Northfield that he establish a parish for them and requested that it be placed under the patronage of St. Dominic.2 .

In this way the congregation of St. Dominic’s pre-dates the construction of the church building itself -- the will and determination of the parishioners helped the town overcome the fiscal and labor challenges to build a communal church. 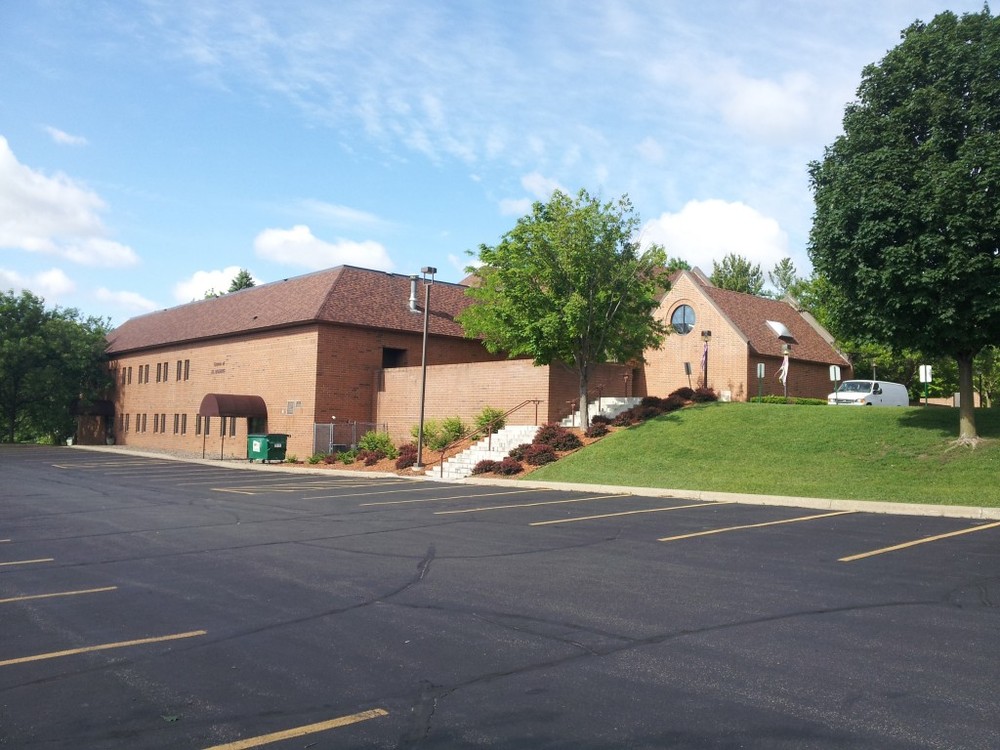 As with most immigrant stories, discrimination influenced the lives and contributed to the struggles that parishioners faced in the late 1850s.  As the Know-Nothing Party gained popularity throughout the United States, and anti-Catholic “nativists” taunted and excluded Catholic newcomers. Focused on unification, or “strength in numbers,” Grace firmly denounced the attempts of different ethnic groups in the region (primarily Italian, German, and Polish parishioners) to establish new Catholic churches and to hold worship services in their own languages.

Father Tom Gleason’s major goal as the pastor of St. Dominic’s Church was to increase the number of congregants.  As a pragmatic man, he was known for his interactions with other denominations in town: playing chess with both Catholics and Protestants alike and interacting with college students at St. Olaf and Carleton College. As of 2014, Father Gleason is the only priest to ever give a convocation speech at Carleton.3 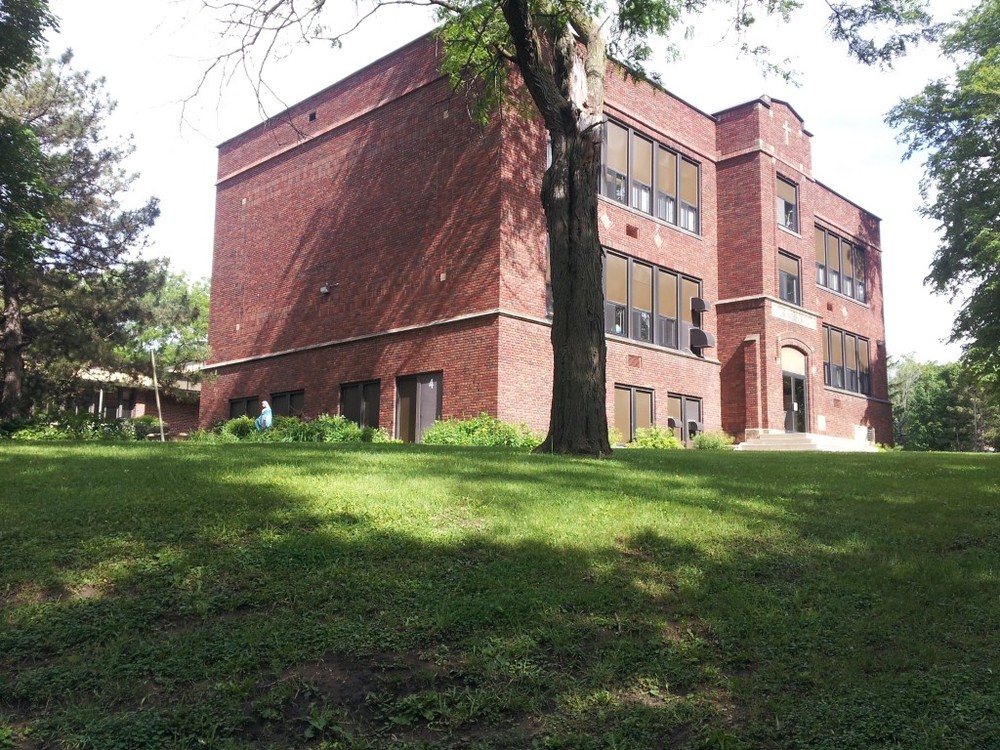 The original Rosary School building that is still used today.

Father Meade believed in building a legacy that would outlive both himself and his parishioners. Today congregants still appreciate such commitment, as they remember the beautiful old church that was completed in 1914 under his leadership. The church was financed through generous donations, costing approximately $32,800.4

Father Meade additionally commissioned the church’s parochial school, founded as a rosary school in 1926 in response to “a growing sense that the children of St. Dominic’s parish were being deprived of one of the most essential privileges of a Catholic youth, namely, education in a parochial school.” Catholic parents who sent their children to St. Dominic’s School could be certain that their child would receive personalized instruction from one of the School Sisters of Notre Dame from Mankato, and prestigious instruction in voice and instrumental ensembles until they graduated in the 10th grade.5

The decision to replace the Church’s original (and still structurally sound) edifice with a newer building was part of a wave of church construction in the immediate aftermath of Vatican II reforms, which sought to make church services more accessible and participatory for laypeople. Vatican II mandated that the main altar be brought forward and that the Priest face towards (rather than away from) parishioners while consecrating the Eucharist. Sacrosanctum Concilium, a major Vatican II document outlining models for “active participation” in the new liturgy, formed as a major motivating factor in the demolition of the original St. Dominic’s Church and its replacement with the current structure in 1985. This decision was not wholly uncontroversial, and was criticized by many conservative Catholics in the area as part of a larger trend to replace buildings that were deemed “too Catholic” with “uninspiring and ugly edifices.” 6