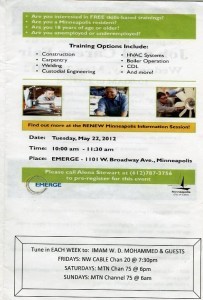 In addition to prayers, Masjid An-Nur has a variety of other programs for its members. Because the masjid cares about the whole self, their programming not only deals with the spiritual needs of their members, but also their financial, educational, and medical ones.

The mosque has an adult Arabic class, which is held three times a week to accommodate people’s busy schedules. One of the primary goals of the Arabic class is to assist individuals in learning how to read and write Arabic so that they can one day be able to read the Qur’an. Like most mosques they offer "New Muslim Orientation Classes," and other educational programs for adults and children. 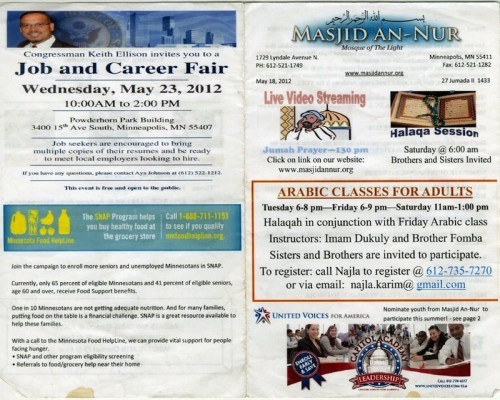 Advertisement for programs being offered by the mosque and outside organizations

The mosque’s weekly bulletin, which is given out at the Friday Jumu'ah service and also distributed to members via email, includes much more than announcements about religious and cultural programming; it is not uncommon to find information about local job fairs, bargains on toiletries, different social service programs and free medical clinics. Information is disseminated to masjid members through the bulletin but also through social media. The masjid as an active Facebook page and members who regularly post about masjid activities twitter.

The masjid has always had a robust social justice orientation, and the members of the mosque recognize that it begins with taking care of the full range of needs of community members. They work closely with CAIR Minnesota, work on voter registration, serve as polling place, partner with numerous interfaith and have been a leader on issues or racial justice and the environment.

Islamic studies book used by women in the Sister's Halaqah.

Additionally, there is an all-men and an all-women group. The Sisters Halaqah or Women’s group, is an Islamic studies program and social group for women who have been practicing Islam for less than a year. They meet every Thursday and every other Saturday. The program enables the women to learn about different Islamic teachings and it also provides them with a social network.

The all-male group, The Brothers of An-Nur, is for men re-entering society after being incarcerated, who want to turn their life around using the teachings of Islam.

Below, Masjid An-Nur member Valerie Shirley discusses the programs that the mosque provides during the month of Ramadan for its members: