People have likely been practicing Islam in North America since the early traders and colonial explorers came in the late 15th century. Brought over from West Africa during the 16th century, enslaved Africans are believed to have been the the first Muslims to reside in North America in any significant numbers.1 According to some scholars, Muslims may have comprised as many as 30% of the slaves who came from Central and West Africa.2During slavery, some Africans Muslims lived together in somewhat isolated communities; the earliest of these communities were located on St. Simons Island and Sapelo Island in Georgia.3 Living in these small, isolated, and tight-knit communities enabled some African Muslims to impart their traditions to younger generations. At the same time, scholars have argued that Black Muslim communities also incorporated and preserved other African traditions as well. As such, from early on, many African Americans practiced and transmitted distinctive forms of Islam.4 The trauma and violence of slavery was meted out on myriad levels, including robbing slaves of their language, religious traditions, and cultures. Over time, many slaves were forcibly converted to Christianity, which African slaves and their descendents also made their own. Some slaves managed to hold onto their Islamic traditions, while others, who were free, held onto Islam. After Emancipation, the numbers of self-identified Black Muslims in the United States was relatively small, but that changed significantly over time.5 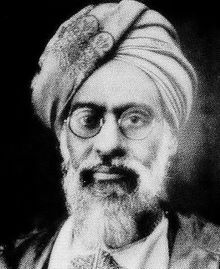 Conversion in the United States

African Americans converted in mass numbers to Islam in the 20th century due to several different conversion efforts by Muslim groups. The first Islamic missionary effort was led by Mufti Muhammad Sadiq in the 1920s. Sadiq was an Indian missionary for the Ahmadiyya, a group that was based on the teachings of Indian reformer Ghulam Ahmad. Ahmadi Muslims share the same beliefs as most Muslims but they differ from other Muslims because the Ahmadi profess that Ghulam Ahmad was the Christian Messiah as well as the Islamic Mahdi. In Islamic teachings, the Mahdi is an individual who is described as the one who will bring peace and justice to all on Judgment Day.6 Ahmadiyya’s assertion that Ahmad was a prophet led to their split from other Islamic groups who believed that there was no prophet after Muhammad. Mufti Muhammad Sadiq settled and made a home for himself on the South Side of Chicago. Within a short period of time he recognized that African Americans in Chicago were more accepting of his message about Islam. In the early 20th century, many African Americans in Chicago had migrated from the South as part of the Great Migration. Sadiq tailored his message to African Americans by stressing that Islam was a universal religion that believed in equality for all people. This message resonated with African Americans who were searching for social networks and a way to deal with the economic hardships they faced after migration. Sadiq also highlighted Christian racism, the use of Christianity to justify slavery, segregation, and the overall oppression of African Americans, in order to dissuade African Americans from following Christianity. The Ahmadiyya also supported the Universal Negro Improvement Association (UNIA), a group lead by Marcus Garvey, a proponent of Black Nationalism.7 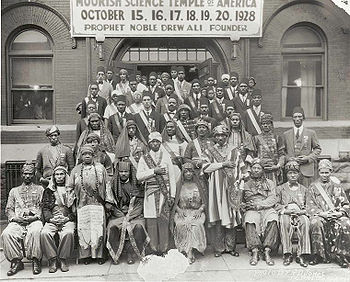 Another conversion effort was led by the Moorish Science Temple (MST) in the 1920's. The MST was the first African American-led Muslim group and was established in 1925 by Timothy Drew.8 Drew argued that African Americans were in actuality Moors, or of Moroccan descent, which meant that they were not black but Asiatic. It followed then, according to Drew, that African Americans were by nature Muslim, as were all other Asiatic people, which he claimed included South America, Africa, and Asia.9 Drew changed his name to Noble Drew Ali and sought to bring the “Moors” to their native religion of Islam through the Moorish Science Temple. He wanted them to be a part of a community that did not include white people, to live by a moral code, and to experience spiritual development. His followers thought of him as a prophet, an unacceptable idea for most Muslim groups. In 1927, Drew published the Holy Koran of the Moorish Science Temple, which included a combination of Drew’s original teachings and reprints from other mystical texts.10 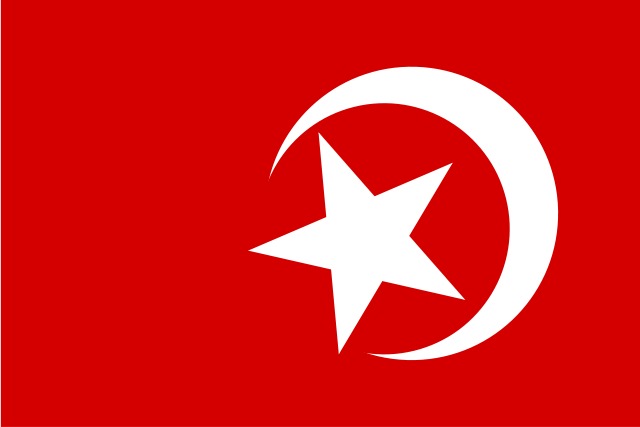 The flag of the Nation of Islam

The Nation of Islam

The Nation of Islam, another African American Muslim group, also facilitated the conversion of African Americans to Islam. Founded in 1930 by Wallace D. Fard, or Fard Muhammad, the organization, preached that Islam was the original religion of Black people. Elijah Poole, later known as Elijah Muhammad, was one of Fard’s rising leaders in the Nation of Islam and he believed that Fard was the Christian Messiah and the Islamic Mahdi. Poole also believed that Fard was God in the human form and that he himself was a messenger of God.11

This declaration separated the Nation of Islam from other Muslim groups. Poole taught his followers that Blacks were the first people on earth, and their way of life had been disturbed by the Yacub (white people) because they enslaved them and converted them to Christianity. God offered salvation for black people by making his presence known in the form of Wallace Fard; Poole believed he was sent by God to prepare Black people to "conﬁdently await a coming apocalypse in which God would destroy the white devil and the Black man would once again rule the earth."12

In 1934, internal turmoil plagued the Nation of Islam base at their location in Detroit after Fard disappeared; consequently Poole relocated the base to Chicago. Once established, Poole taught his followers not to vote in U.S. elections or enlist in the U.S military. He strongly believed in economic independence for Black people and in the complete separation of Blacks and Whites in order to end racism.  Poole spent some time in prison in 1943 for refusing to register for the military; during this time, his wife Clara Muhammad ran the organization.13

Malcolm Little was among the most famous converts to the Nation of Islam. While in prison between 1946-1952 he was introduced to the teachings of Elijah Muhammad and he changed his name to Malcolm X. After more than a decade of promoting Black separatism and liberation through the Nation of Islam, Malcolm X made pilgrimage to Mecca (Hajj), turned to Sunni Islam, changed his name to El-Hajj Malik El-Shabazz and adopted a more moderate political discourse.  The Nation of Islam was not the only organization seeking black Muslim converts in the 1940s and 2930s. There were also African American Muslim organizations that were specifically Sunni, which encompasses the majority of Muslims worldwide brought together under some common religious practices and beliefs.14 Sunni African American groups could be found in Brooklyn and West Valley, New York. Some of these African Americans had embraced Sunni Islam after first being introduced to Islam by groups like the Moorish Science Temple.15

Reforms in the Nation of Islam

The Nation of Islam underwent a reformation in 1975 by Imam Wallace D. Muhammad, the son and successor of Elijah Muhammad.16  When Imam Wallace D. Muhammad assumed leadership of the Nation of Islam, he first decentralized authority within the organization. He also sold the businesses that the group owned, and began preaching that Fard was not a reincarnation of God and Elijah Muhammad was not a messenger of God. He also began to change the language used in the organization: for instance, he decided to no longer be known as a “minister” but as an “Imam” and the temples were to be called “Masjids.”17 Under his leadership, the Nation of Islam was transformed into a Sunni Muslim organization. Imam Wallace sought to transform the community from one focused on Black Nationalism to one focused on inclusivity of all Muslims everywhere. To do so, he sent individuals from the Chicago temple to different parts of the country to establish other Masjids and Islamic communities.18

Black Muslims in the U.S. Today

According to the Pew Research Center, a 2017 survey suggests that one fifth of the Muslims in America are Black, which is approximately 2% of the Black population. Among Black Muslims, 49% are converts—compared to 15% of Muslims who are not Black—and a majority (55%) are very committed to the performance of salat (prayer) five-times a day.19