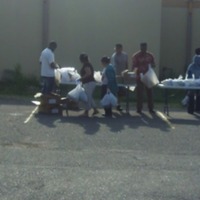 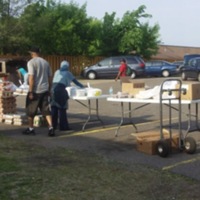 Volunteers setting up at Food Shelf 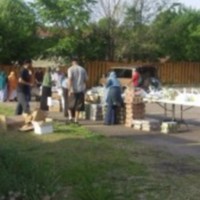 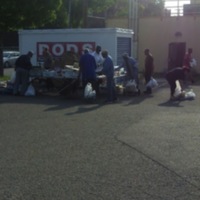 Every third Saturday of each month, Masjid An-Nur hosts a food-shelf. The program began in 1997, a year after the mosque opened its doors. The food shelf begins at 8:00am but volunteers arrive at 6:00am in order to sort and bag groceries for the people receiving food. Most often the volunteers are Muslim and members of Masjid An-Nur, but anyone is welcome to volunteer. People receiving the food begin to line up for the food shelf at 7:00 am.

Like the volunteers, the people receiving the food range from regulars to first timers. It appears that most people come from the surrounding neighborhood, but it is possible that some come from farther away as well, since many of them seem to drive to the mosque. Volunteers are spread across stations and have different jobs. While most are assigned the task of bagging groceries, others help in different ways, such as the person whose job it is to collect all the cardboard boxes for recycling. A select group of volunteers are in charge of bagging groceries that are meant for delivery. Although many families come to the food-shelf in person, some are unable to do so; volunteers from Masjid An-Nur bring the groceries to those unable to come themselves.

At the food shelf there are four separate stations. Volunteers stand on one side of the table bagging groceries, and placing them on the table for food-shelf goers to pick up as they pass by. Every table has something different to offer. One table has starch products, and the two others have canned vegetables. The last station is a fruit and meat stand, where recipients can select from a variety of choices. It is reported that 95% of the people who receive services from the food shelf are not Muslim, highlighting the Masjid’s commitment to serving the needs of the community no matter what their religious affiliation. Many of the people who receive goods from the food shelf are Black, but there the food-shelf also seems to serve a large Asian community as well.

Volunteer Valerie Shirley explains the logistics of the Food Shelf