In America, the largest number of converts to Islam have consistently come from African American and Afro-Caribbean communities.1 From the late 1950s to the 1980s, in particular, many African Americans came to Islam through the Black Nationalist movement. The Nation of Islam's theology, which integrates Black empowerment, pride, and superiority with Islam has been especially compelling for those seeking to reject forms of systemic racism. Other Black Muslims found Islam while incarcerated. As rates of incarceration have ballooned, many Islamic Outreach programs focused their attention on prisons. Approximately 35,000-40,000 inmates convert to Islam each year, most of whom are Black.2  Members of the Black community have been drawn to Islam for many reasons, but among them many also cite Islam’s call to peace and focus on social justice, as well as a recognition of Christianity's relationship to slavery and colonization.3

Despite negative media attention, Islam is the fastest growing religion in the United States and the UK.4 This growth is due in part to immigration but also growing rates of conversion, which has also brought white and Latinx people to Islam. In the United States, African American men continue to be the largest group of converts to Islam, with white women making up the second largest group.5 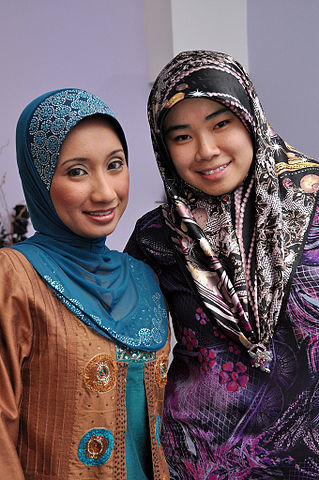 Two muslim women wearing Hijabs. This clothing can feel like a mark to women who enter Islamic culture.

The experience of converting to or embracing a religion can be complicated by one’s race, ethnicity, nationality, and/or gender. These issues are particularly heightened in a post-9/11 America, particularly for women converting to Islam. "Gender issues have been pivotal in the construction of Otherness between 'Islam' and the 'West.'"6 But such problematic, Orientalist, and Islamophobobid dichotomies are challenged when white women convert. If Islam is the “Other,” then what is a white Muslim woman living in the America?

Some women who convert, especially white women who have not experienced racism or marginalization before face stereotypes; Non-Muslims presume Islam to be "oppressive," "rigid," and "sexist." For those women who cover themselves, "Otherness" is embodied. This is why Muslim men and women often speak about their conversion in radically different terms. Though embracing Islam requires theological, ideological, and even ritual change for men and women, women who cover take on a different level of embodied transformation, especially in a context that sees the hijab as a symbol of oppression.

Take for instance, the conversion experience of Masjid An-Nur members, Mahdee Abdullah and Valerie Shirley, both African-American Muslims who converted to Islam when they were a teenager and adult respectively.

When asked about his conversion experience Mr. Abdullah said it was a fairly easy process.

I probably was about thirteen, fourteen, somewhere in there. I had two older brothers, that were Muslims. So I used to go with them to the masjid and after a while, then I decided that this was something that I wanted to do, because basically, I – we grew up Catholic. So I was altar boy and you know, went to Catholic school, and all that – I was in religion all my life, pretty much, in some form, and when I heard Islam, I thought, “That’s for me.” So about, fourteen I would say. [Interviewer: Okay, great. And so, when you embraced Islam, was it as a Sunni Muslim, was it as a –] Nation[?]? No. Sunni. Sunni. [Interviewer: Sunni Muslim. Okay, thank you. Are all the members in your family Muslim as well?] No. It’s just me, two brothers, and one of my… my only son, and then one of my younger daughters is Muslim. [Interviewer: Great. And so, what is that relationship like, interacting with other family members who are not Muslim like yourself?] It hasn’t really been a problem. I think when I was younger it might have been a little bit of a problem, because of not eating pork, so they had to watch what they were cooking, or with the five daily prayers, they didn’t really understand that, you know, just some things like that because it was – back in them days, it was pretty new here. Where nowadays you’ve got so much influx of different people coming into Minnesota from all over that, it’s more tolerant of different ethnicities and religious people and different things like that. So, I think it was a pretty good transition. I mean, overall.

I had two older brothers, [who] were Muslims. So, I used to go with them to the masjid and, after a while, then I decided that this was something that I wanted to do.... I was in religion all my life, pretty much, in some form, and when I heard Islam, I thought, “That’s for me.”

In contrast, Valerie Shirley found embracing Islam difficult at first, particularly because of the demands it placed on her outward appearance. Shirley stated, “Almost right away I learned what it meant to cover and I cried honestly the first day I found out that I had to wear a scarf everyday… at first I was like, "Oh, my God, I’m going to be discriminated against.’” Shirley was reflected upon how people would now recognize her as Muslim before recognizing her as African-American; which would change her positionality in the overwhelmingly non-Muslim and Islamophobic society in which she lives.

Many Muslim women view covering and modesty as a point of pride and piety. While Shirley was initially hesitant to cover, she subsequently embraced covering. She shared that the “hijab has been empowering for me. I actually really love wearing it.” (You can read more about Valerie Shirley’s experience with and thoughts on covering in Voices of Masjid An-Nur.) However, by bearing this visible marker of difference, Muslim women who cover in the US are often victims of Islamophobia. Post-9/11 and following the election of Donald Trump, Muslims in the US have faced increased hostility, a rise in discriminatory policies and the number of hate crimes rising exponentially.7