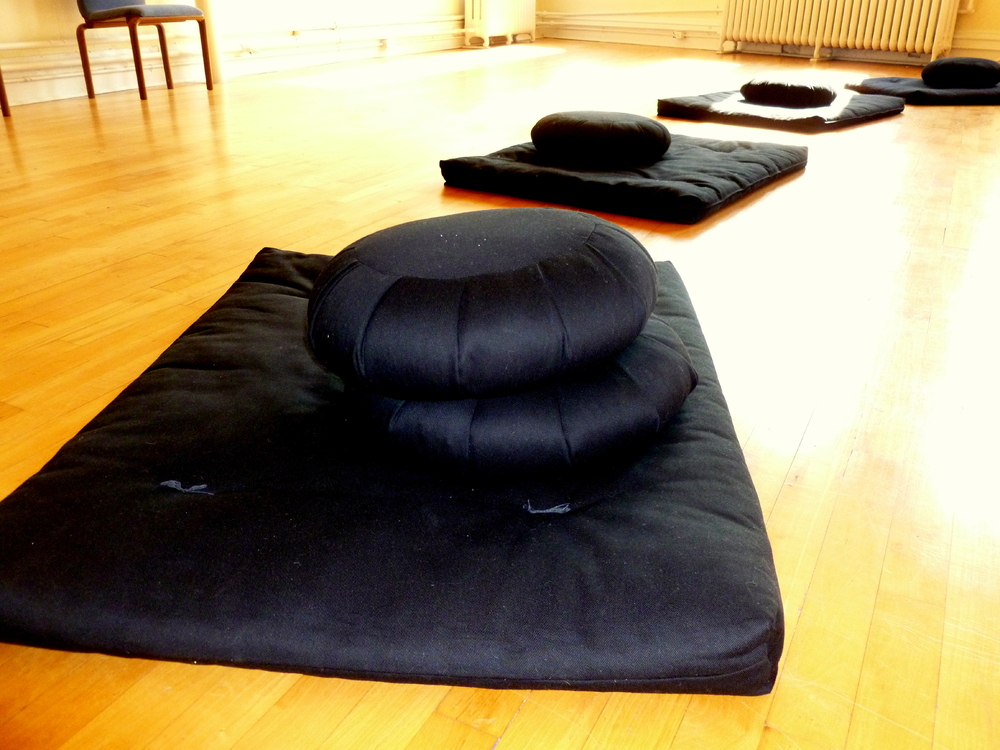 The Practice Period is a type of designed for both newcomers and experienced members.  During the Practice Period, the teacher (usually Mark Nunberg) leads a guided meditation in which he speaks throughout the twenty minute speak about mindfulness and not being upset if you have difficulty meditating.  After the sit ends, the teacher leads a group discussion of a book the group has been reading on meditation or Buddhist theory, and takes questions about any physical, personal, or spiritual difficulties members are experiencing.

At the Practice Period I attended, Mark Nunberg lead both the sit and discussion.  Mark, who is considered by several members to be the leading teacher of the center (if it has one), is charismatic not due to dramatic teachings, but due to his soft-spoken, deliberate, and contemplative style of speech that leaves an audience hanging on his every word.

"the way the buddha taught, he was really pointing to a freedom from that whole mechanism of getting somewhere. that’s why there’s a big emphasis on the present moment."  -Mark Nunberg

Clip 1: Mark speaks about present moment awareness and the danger of our desire for imagined better futures.

One phrase he interwove throughout the Practice Period was “it’s like this.”  “It’s like this” refers to seeing things in the world as how they are,  saying “this is like this.”  Mark used this to develop the importance of present moment awareness, which mindfulness meditation develops. Show Transcription for Clip 1.

There are these little things, as small as they might seem. Being frustrated by things, being frustrated by pain in the body, or by traffic. It’s not really about the snow on the ground, this light into spring. It’s really about maybe we won’t get what we promised ourselves. You know, that beautiful spring or that beautiful retirement or beautiful experience of heaven. And then it really shows up how we have created these dualistic sets of “this isn’t okay, but I’m on my way to this, which will be okay.” And then of course we are always evaluating and judging ourselves. We always have doubts, which can be really painful, or we can think we’ve blown it which can be painful. Or we think we’re further along than other people, which creates a lot of pain. So in the way the Buddha taught he was really pointing to a freedom from that whole mechanism of getting somewhere. That’s why we simply focus on the present moment. And it’s sort of recognizing, why does the mind create this problem? And we can see it in our reaction to something ordinary, like the weather. That it’s really a metaphor for all of our reactions. So the mind assuming in some way or another that this is incomplete. And it won’t be complete until whatever we’re imagining out there as our goal, as our end. Now, we can’t get away from it entirely. I mean, even having a notion, a concept of “we’re all okay. Now I’m just gonna be really interested in finding liberation here, in the present moment.” But even that can turn into something. Like, I can’t find liberation now in the present moment, but if I develop this practice then someday I’ll realize. So there’s no getting away from some goal. So I’m not suggesting that we don’t have a goal. But when we operate in that sphere of life, having goals, we really want to be careful. We want to be attentive to what we’re doing, and the kind of tension we’re creating in the mind. Often in a subtle way, like this isn’t it. And then whatever we’re imagining, we think that’s a place. Like, we think that heaven is something. But it’s just imagination right now. So, this is actually the work we’re doing. We’re not just releiving some stress. We’re literally transforming a very deep pattern of human beings rejecting this mind and imagining that whatever we imagine is the ticket. And constantly being aware of this assumption that “this isn’t it.” I mean, that’s the one thing we share is this underlying thought that this isn’t happiness. This isn’t enough. And even if we’re having a really beautiful moment. This isn’t it because we know we can’t hold onto it. So we even reject that! Which is what we’re trying to hold onto. Which means it can’t really be “it” if we have to do something. I mean what’s really “it” is when we dont want to do anything. When I don’t want to do anything to make it okay. Then we know it’s okay. Because then we can relax and just live our life, because then it’s really okay. So anytime we find that we’re not in that place of full release, just allowing life to be the way it is, we know we’re not there. We know we’re...Like a Buddhist teacher once says, he talks about a dog barking up a tree that isn’t there. It’s a metaphor for this, the absurdity of us looking for something. And this is the problem with imagination and thought language. We can concoct things that are not present, like a future. Heaven. We can concoct that and then we aim for that instead of finding some passion and wisdom in release right here with the moment as it is.

Clip 2: A woman who frequently attends the Practice Periods talks about Mark’s teaching

Many people at the center identified Mark as one of the most influential figures in their meditative practices.  Mark, who is a teacher and student of the mindfulness (Theravada) Buddhist tradition, is a source of guidance and wisdom for many members of the center, whether self-identified Buddhists or not. Show Transcription for Clip 2.

There are 3, we’ll call them orientations or principles. And they’re the Budda, the Dharma, and the Sangha. And two of those matter a great deal to me. The Dharma, which is the teachings, and the Sangha, which is the group. The Buddha part is much less interesting to me. Except when someone like Mark, who is a real guru for me, a guided teacher I’ll say, says, “okay, the Buddha said this,” okay, then it becomes a part of this wisdom. And so I pay attention.