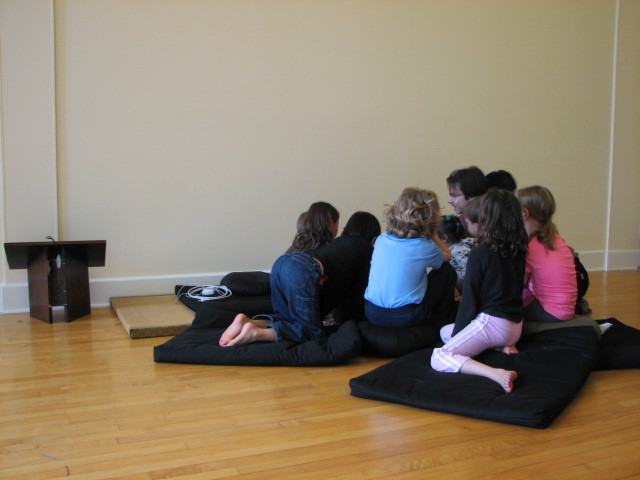 Kids gather around Justin to hear him read during a Children’s Circle. Photo by Anna Guasco.

Justin discusses Anicca with the kids.

What I mean is even this mountain, it’s constantly changing! All the time. It’s being eroded away. And then a volcano will come...There’s a Buddhist term for this. It means that everything is changing, all the time. You and that mountain and my dog are changing all the time. So, there’s a word for that. Here’s the word, say it after me: Anicca. Can you say ‘Annica’? Can the parents say ‘Annica’? Okay, so ‘Annica,’ it means that everything is changing.

On the third Sunday of every month, the center hosts an afternoon “Children’s Circle” intended for children ages 3 to 10 and their families.  When I visited the April 2013 Children’s Circle, a little under 10 kids were present, several of whom were siblings.  The circle started with an informal sorting of colored rice (which the kids did while the parents conversed. The meaning of this activity would be explained later.)  Next, one of the parents led a short yoga session, which the children really enjoyed. After practicing yoga, the parents and kids meditated for a very short sit. Some of the kids had difficulty staying still, but all seemed to be trying.

After yoga and meditation, a parent and the leader of the circle sat down with the kids at the front of the meditation area and gave a personal, humorous, and fun lesson on the concept of “anicca.” According to Buddhist theory, we and our environments are constantly changing.  The impermanence of the world is encapsulated in “anicca.” To illustrate anicca, the parent-leader showed pictures of his son now, and in the past, to show how not only did his son change, but it was so gradual and constant that he did not notice it happening in each moment.

An eight-year old boy described Buddhism as 'kinda like it means peace, no violence. To become Buddha, you’re moved by the Four Winds. You don’t get mad.'

After this discussion, the kids made mandalas using paper designs and the colored rice that they had earlier sorted.  After finishing a design, the kids would wipe the design free of rice, to illustrate the art’s sense of anicca. (Though the kids could also eat the rice, which they enjoyed.)  This activity is based on similar impermanent mandala art done by traditional Buddhist monks, who will create elaborate mandalas out of colored sand, and then wipe them clear (on the right-side image below).

At the end of the event, I spoke with some of the kids.  One common theme I noticed was that most of them like the Children’s Circle, but find meditation difficult. Of all the people I have talked to at the NBMC, these kids had some of the greatest and simplest definitions of Buddhism.  One girl said Buddhism is “peaceful,” another that it is “meditating,” and two children said Buddhism is “quiet.”  An eight-year old boy described Buddhism as “kinda like it means peace, no violence.  To become Buddha, you’re moved by the Four Winds. You don’t get mad.”