With Buddhism I found that I really had to find forgiveness. And no one here told me I was forgiven, is when I went back to Vietnam. I started doing bodywork there, and we’d take veterans, me being one of them. And we would go to orphanages and old age homes. And because I’m a rolfer, I would work on people—kids as well as older folks. And I had a—a Vietnamese man told me that he forgave me. He was the first man who’d told me that. When that happened, there was another shift. And I started thinking, if the people in Vietnam can forgive me, how can I forgive myself? How can I learn to forgive myself? Buddhism has nurtured that. Those small little steps, one step at a time, one breath at a time, you can find forgiveness. And so that’s what I’ve been doing. It’s been my path, and I know it’s probably always been my path, because I don’t see any other philosophies that give me that.

Daniel tells his story of adopting a child from Vietnam.

From 1968 to 1969, Daniel was a soldier in the United States Marine Corps in Vietnam.  After returning for Vietnam, Daniel suffered from PTSD and extreme self-guilt from the war.  After suffering from the results of the war and experiencing difficulty in finding his path, Daniel discovered Buddhist meditation.  While visiting Vietnam for the first time after the war, Daniel experienced a transformation of his understanding of himself and others through Buddhism and meditation. Meditating allows Daniel to stop living in the past, to become aware of the present, and to forgive himself. After establishing a structural integration healing practice (or “rolfing”), Daniel and other veterans of the war returned again to Vietnam to bring their skills to help local people. When thinking of this time, Daniel remembers feeling incapable of forgiving himself for his role in the Vietnam War, but that it was in going back to Vietnam that he found internal and external forgiveness. To hear Daniel describe his search for spiritual and intellectual peace in his own words, click on the audio clip to the left. Click here to Show Transcription of Daniel's adoption story.

We were doing some work in 2001 on a trip with veterans, with an organization called TOPS. Tours of Peace. Run by a veteran in Tuscon, Arizona. Where you go and visit your old haunts and you do humanitarian work. It’s a way of healing. So on one of our trips in 2001 my wife and I—the kids were taking a nap in this one orphanage. And I had a little stuffed yellow bunny. And a little girl was waking up. I gave her the yellow bunny. I call her yellow bunny girl. And we went into the ward with the disabled kids, and we worked in there for a couple of hours and then we came outside. The little girl I had given the bunny to—she was on the swings, and she was swinging and singing and throwing that little yellow bunny up in the air. And my wife and I had been married at that time 11 years. And we had vascillated about adopting, it was on the back burner. Well that night, after we did some processing with the group, we just went back to the hotel and we said, “let’s adopt a kid from Vietnam.” Almost simultaneously. And we came back and started interviewing agencies and found one that we had a good track record with. So we started the process, which was 17 months in our case. Getting dossiers for each of us, going through parenting classes, home studies. And one day we get a referral. And all we cared about was we wanted a girl, and we wanted a healthy girl, because we didn’t have a lot of money for medical problems. So they sent us the medical sheet. And they sent us a fax. And they sent us 2 pictures. And you couldn’t see her! I have it at home. And I didn’t care what she looked like. All I cared was that she was healthy. So I said, yeah, sure, we accept. So they call us and we accepted, we finished all the paperwork. And they said okay, it’s time to make your first trip. And we knew there was going to be two trips. And here she is from Danang, Vietnam, which is Quang Nam-Da Nam Province. And it happens to be, I was 6 miles from where she was born. I was there in ‘68-’69. She was born in 2002 in Danang. I mean, the hospital she was born in, I could see. Hill 327, we call it Freedom Hill. Five marble mountains where there’s mountains and caves, and I could see monkey mountain on the coast. And that’s where she was from! I mean, how does that happen? I don’t understand any of that, how it all happens. I just knew that it was meant—I mean, everything just kept point to this is what you should do. So every kind of symbolic sign we got was, this is the right thing to do, this is what you should be doing. And so, that’s all that came about. 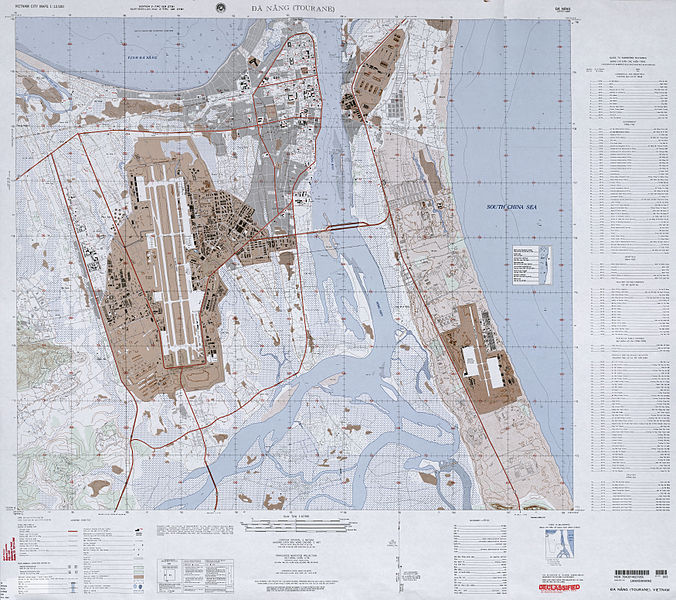 A United States Army map of Da Nang, Vietnam from during the Vietnam War.

In addition to developing an identity as a Buddhist, Daniel has experienced another major transformation in his life: in 2002, he and his wife adopted a child from Vietnam.  He lovingly describes his child as “often [being] the Buddha in my eyes,” and seems amazed at how lucky he considers himself to be.  To hear the wonderful story of how Daniel and his wife adopted a child who was born just six miles from where Daniel had been stationed during the Vietnam War, click on the audio clip above.