A member of the “baby boomer” generation, Roger grew up in an essentially non-religious family in New York.  Though his parents sent him and his brother to Presbyterian Sunday School for about a year, religion and Christianity were not at all a strong part of his upbringing.  From very early on, Roger was able to explore spiritualities and mentalities atypical to those of his fairly Christian suburb.  At the same time, the cultural tumult of the 1960s was raging – the civil rights movement, the Vietnam War, and so on.  Roger’s yearning for something different from the culture in which he was living led him to read about Buddhism, among other Eastern religions such as Taoism and Hinduism.

To hear Roger talk about the cultural context of the 1960s that nourished his interest in non-Western religious tradition, click on the audio clips above.  In the first, he describes why the 1960s had such an influence on his and other young people’s desire for something outside of American society. In the second, he reflects on his previous assumption that interest in Buddhism would decline after the initial surge, which he attributed to the cultural upheaval of the 1960s. He then explains how this has been proven wrong and how Buddhism has not faded from the United States. Show Transcription

I was reading Hindu stuff...You know, just sort of typical late-’60s slightly rebellious teenage existential kind of stuff. And it turned out that Buddhism was the aspect of that that stuck the most. So no religious background to rebel against particularly. I mean I would say that in the cultural context of the mid to late ‘60s, if you’re going to think of me sociologically and psychologically, I was fairly typical of young people in that era who were, if not directly engaged in, sympathetic with the Civil Rights Movement. And engaged in the Anti-Vietnam war movement. And in the context of threats of these assassinations, war, nuclear war, all these kinds of things, I would say rightly or wrongly—I would say quite wrongly, in fact. Western civilization was practically at a dead end and where wisdom was truly to be found was in the “mysterious East.” So I was what we would nowadays describe as kind of a “romantic orientalist.” I actually had no clue what Asia or the East was really like. But I projected this image of it as the alternative to the culture I was living in, because the culture I was living in was bankrupt. I often wondered whether our particular generation, because of its historical location and all of the issues it faced, would be kind of unique generation for Buddhism in America. And I think for many years I thought, well, after the baby boomers are gone, essentially, it’s probably curtains. But there actually are many more young people drawn to Buddhism than I predicted. And in many cases it’s the kids of people who are themselves Buddhist. And in many cases it’s just what Buddhism has to offer. And I think one of the things people are particularly drawn to nowadays is the intersection between Buddhism and, say, neuroscience. The variety of studies and experiments that have been conducted. Like the general credence that meditation is actually good for you. 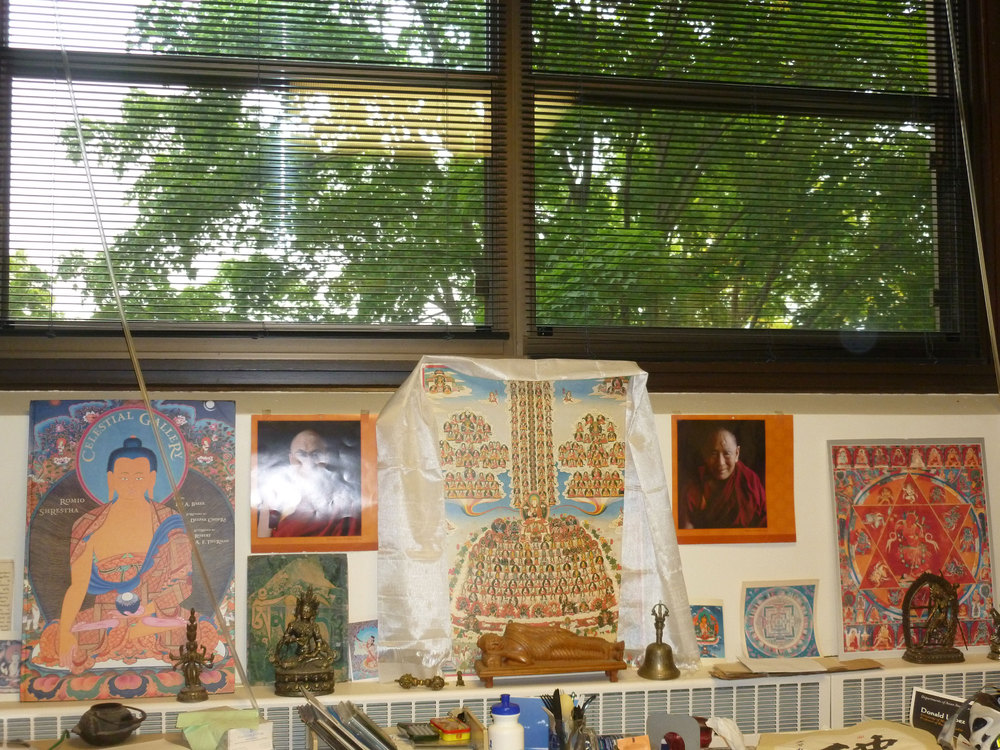 Roger’s office, which he describes as having a Tibetan Buddhist aesthetic in the colors and utilization of space. Photo by Anna Guasco.

Roger speaks about what Buddhism means to him.

In college, Roger became a religion major, but it wasn’t until a year after graduating from his undergraduate program that he experienced a “conversion” to Buddhism, while traveling in Southeast Asia.  He and his girlfriend (now wife) participated in Tibetan Buddhist educational and meditative retreats in Nepal, and both, to this day, continue to practice Tibetan (Mahayana) Buddhism.  After returning from Nepal, Roger enrolled in a graduate program in Buddhist studies at the University of Wisconsin.  While attending the graduate program, Roger helped found one of the first Tibetan Buddhist centers in the United States. As an organizer of this center and an academic student of Buddhism, Roger started to develop a dual identity as a Buddhist scholar and practitioner.  He eventually became a professor at Carleton College in Northfield, Minnesota, where, in 1996 he and his wife joined a small group of people who were interested in Buddhist meditation.  This group, which met at the members’ homes every Sunday morning was the original Northfield Buddhist Meditation Center.  As the center has grown larger, Roger has become less involved in the weekly meditation practice at the center, preferring his own Tibetan practice at his home.  He has, however, continued to be involved in teaching at the center, both as a teacher and as an attendee of the monthly Dharma talks. To hear Roger describe what Buddhism and being Buddhist means to him, click on the audio clip to the right. Show Transcription

I think for a long time what it’s meant to me above all is operating within a kind of ideological and aesthetic framework that includes a variety of ideas and images and sounds and smells and actions, all of which go back in my life to my impressionable years, and particularly my early 20s. But more specifically what it tends to involve is some kind of attempt to practice, within Mahayana (Tibetan) Buddhism, they identify two major virtues that you cultivate. One of which is compassion and more broadly the desire to attain some kind of liberated state and work for the sake of all sentient beings. The other is to gain insight and wisdom into the actual nature of things. Because the Buddhist idea—and I think of myself in many respects as kind of an agnostic Buddhist, in that I’m not really sure about past and future lives. I’m not sure that karma operates in precisely the way that Buddhists have traditionally said it does. I’m not entirely sure that there is an objective state of enlightenment, let alone omniscience. Such as is traditionally described. But all that notwithstanding, it has struck me over many years now that the techniques and arguments and practices that Buddhists have developed for maintaining a generous spirit, for living an ethically sound life. For being patient in the face of adversity and even abuse. For maintaining some kind of energetic enthusiasm about moving forward in life. The value of taking time to meditate. And trying to generate some kind of understanding of who we really are and what the world really is, are all tremendously valuable.