The Northfield Buddhist Meditation Center has, from its very origins, been a non-denominational, “ecumenical” center.  Its founding members were of various Buddhist traditions, and some did not fully identify as Buddhist.  Though the center draws from several of these Buddhist traditions (primarily the Theravada “mindfulness” tradition, but also Tibetan, Zen, and Vipassana Buddhism), it is steadfastly non-denominational.

According to Professor Roger Jackson—a founder of the center, a renowned scholar of Tibetan Buddhism, and Emeritus Professor of Carleton’s Religion department—the fact that the Center does not identify with a specific Buddhist philosophical tradition is fairy atypical for Buddhist Centers, both the United States and abroad. Instead of promoting the practices of one tradition.

While in its early years, the NBMC took on a distinctly "Zen flavor," because its main practice director was trained in Zen Buddhism, in more recent years, the NBMC has leaned more towards Theravada, or "mindfulness" meditation. The fluidity of traditions practiced and taught reflect the orientation of practitioners and the teachers who are involved with the Center.

The NBMC’s focus is on meditation in silence, and individuals are free to practice whichever type of meditation they prefer.  Many members do not identify themselves as “Buddhist” at all, but rather describe their individual meditative practices as “secular” paths to mindfulness, stress reduction, and a better life. To hear members of the Northfield Buddhist Meditation Center speak about how they understand Buddhism, click on the audio clips to the right (Part 1) and below (Part 2). Show Transcription for clip 1.

Speaker 1: What intrigues me is the anthropological aspect of it. Which is, how do you go about bringing a completely different spiritual system from one part of the world to another part of the world? What kinds of adaptations and compromises are made to make it work? And are those adaptations a good thing? Or are they corrosive of the essential qualities of the practice? And I don’t have the answer to that, but it’s happening all over the place. It’s just really kind of amazing what a huge phenomenon it is.

Speaker 3: We never have defined ourselves or limited ourselves to a specific Buddhist tradition.

Speaker 4: There’s just a kind of support that we all understand why we’re here in spite of the variations. And we all know this is a good thing to be doing with our lives, and maybe in some sense for the world. I mean it’s certainly not hurting the world, but we’re becoming more peaceful.

Many members do not identify themselves as “Buddhist” at all, but rather describe their individual meditative practices as “secular” paths to mindfulness, stress reduction, and a better life. 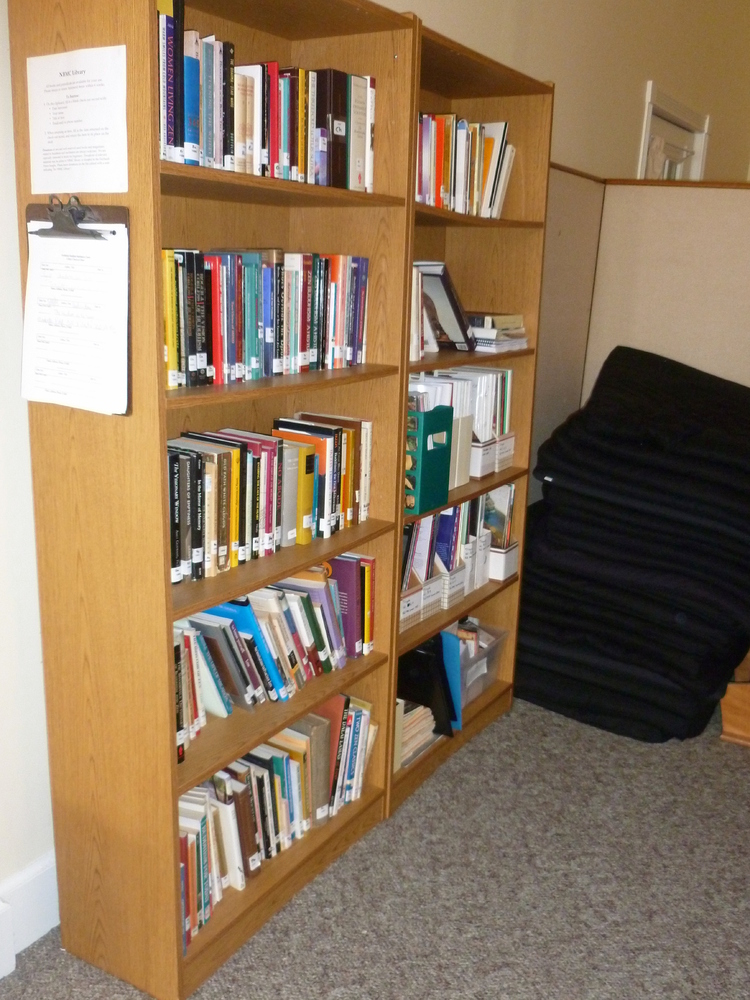 Teaching at the center comes in the form of monthly outside speakers and in monthly Practice Periods, led by one of the center’s official teachers.  However, the main role of teachers is to guide meditation (during Practice Periods), and to begin and end sits.  In addition to the center’s refraining from preaching from specific traditions and defining itself as a certain type of Buddhism, its members themselves have their own definitions for what Buddhism is. Many speak of compassion and maintaining “present moment awareness,” regardless of their religious, spiritual, or secular approaches. Members also teach themselves more about Buddhism and meditation by checking out books from the center’s library, free of charge. Show Transcription for clip 2.

Speaker 1: I don’t find Buddhism dogmatic. There’s not a lot of rhetoric. It’s the study of yourself and how you got to be where you are.

Speaker 2: Maintaining a generous spirit. For living an ethically sound life. For being patient in the face of adversity and even of abuse. For maintaining some kind of energetic enthusiasm about moving forward in life. The value of taking time to meditate. And trying to generate some kind of understanding of who we really are and what the world really is.

Speaker 4: The way I understand the Buddha is that he’s not saying as some people would interpret, that I am the way of the truth and right. He’s saying, this is what I discovered. Now you can find out for yourself.

Speaker 5: I have read 20 books on meditation. I’m reading this one and I’m seeing different perspectives again. I’m realizing that I don’t know. And if I can keep that childlike understanding of life, my happiness level is going to be at a different point all my life. I don’t want to solidify in my beliefs. I want to keep trying to grow and to learn, and that’s one thing I love about Buddhism. You’re constantly learning. When you think you know it, you don’t know it.