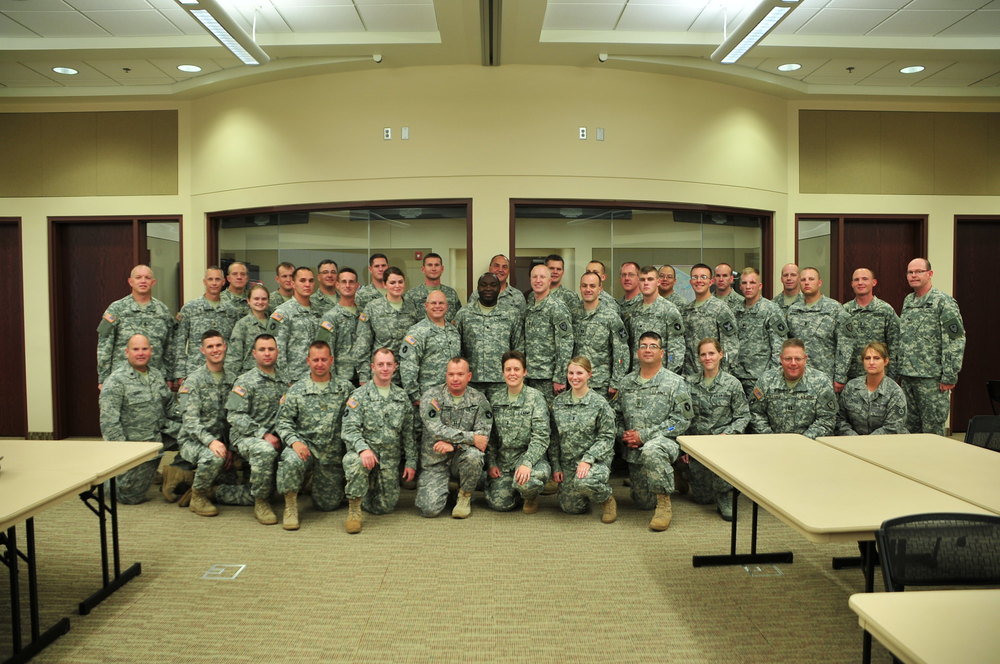 Minnesota National Guard Chaplain Support Teams at the Emergency Management Training Center at Camp Ripley in August 2012. These chaplains provide invaluable stability, resilience, and spiritual care for service members overseas and at home. While most are Christian, they are responsible for supporting troops and families from a range of religious traditions. 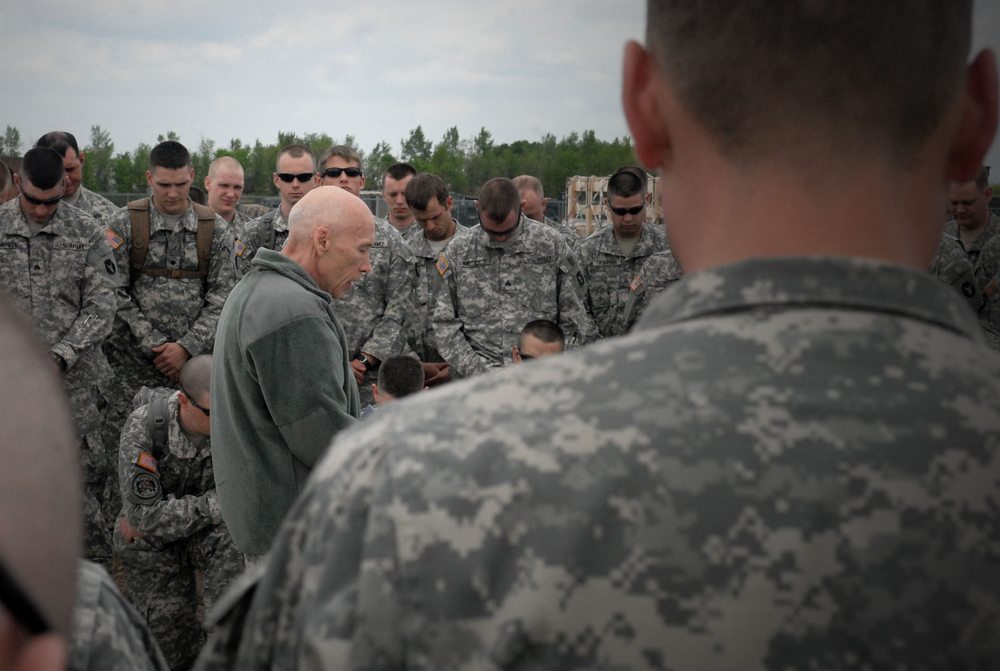 Soldiers of the Moorhead-based 2nd Combined Arms Battalion, 136th Infantry gather around Chaplain (then-Major) Jerome Fehn for a benediction before visiting and training with the Croatian Armed Forces in June 2011.

Chaplains in the Minnesota National Guard can be "priests, ministers, imams, rabbis, and divinity students," and they "play a vital role in the lives of the men and women in the Minnesota Army National Guard. Chaplains also minister to the needs of the soldier's families - wives, husbands, and children."1 For troops in warfare simulation training, held at the Fort Irwin National Training Center in California's Mojave Desert, chaplains and the religious services they provide can be an immense help when soldiers are exhausted by the heat, intense work, and time away from loved ones.2 The importance of chaplains is amplified when troops are deployed to combat zones in places such as Kuwait and Iraq, where a 22-month deployment of Minnesota National Guard service members "constituted the longest tour of duty of any military unit in Iraq."3 The Minnesota National Guard deployed chaplains overseas 25 times between 2003 and 2016.4

What equips chaplains to listen and hear, to lead in praise and thanksgiving, to accompany those who have borne the battle, to provide solace and hope, to advise commanders in matters of ethics and morals, and to facilitate the re-building of service members' understandings of the world, humanity and the divine when faced with experience that renders previous views impotent?5
—Chaplain Linda Campbell 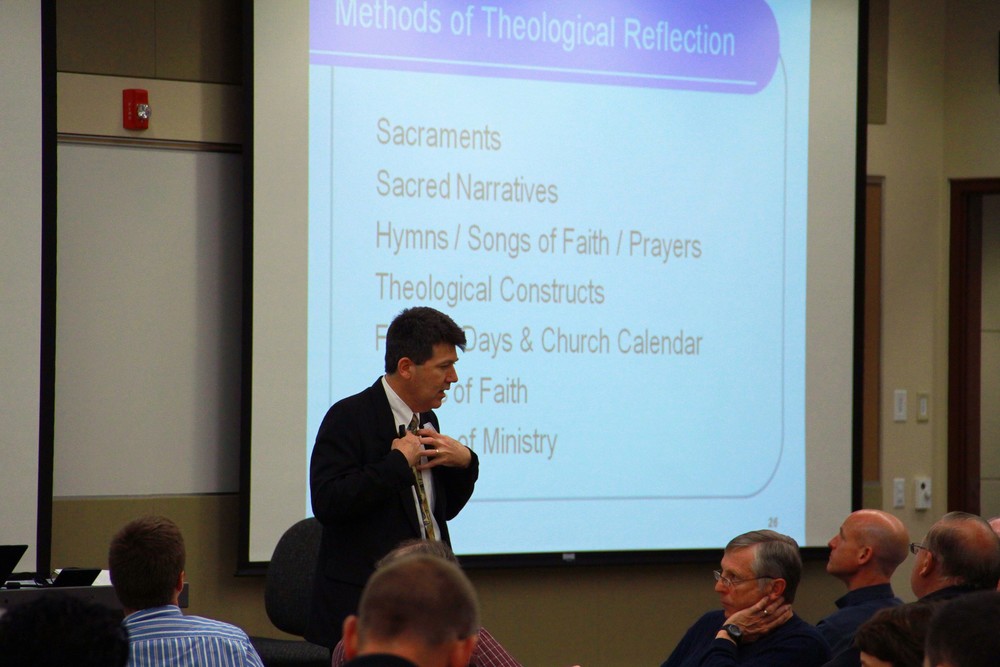 Rev. John Oliver, chief of the chaplain service at the Association for Clinical Pastoral Education at the VA Medical Center in Durham, NC, addresses 100 pastors during regional chaplain training at Camp Ripley in June 2013.

In response to these crucial questions, the Minnesota National Guard, in cooperation with the Department of Veterans Affairs, established a Clinical Pastoral Education (CPE) program in 2007 to help chaplains of all ranks and religions reflect on their respective theologies and determine how best to provide spiritual care to those they serve.6 Through 2013, nearly thirty chaplains took part in this CPE training; some continued on to CPE residency programs at hospitals, while others "offer[ed] ministry with their units in Minnesota communities experiencing natural disaster, Iraq, Kuwait, and in the homes of those experiencing the death of an [Army National Guard] soldier."7

Prepared to listen to their heart and to reflect on their experience, these CPE-trained [Army National Guard] chaplains are equipped to walk with service members through the valley of the shadows of life, to point to the light in the darkness, and to remind us all that though the waters of chaos may converge and threaten to overtake us, we are not alone or without hope.8
—Chaplain Linda Campbell 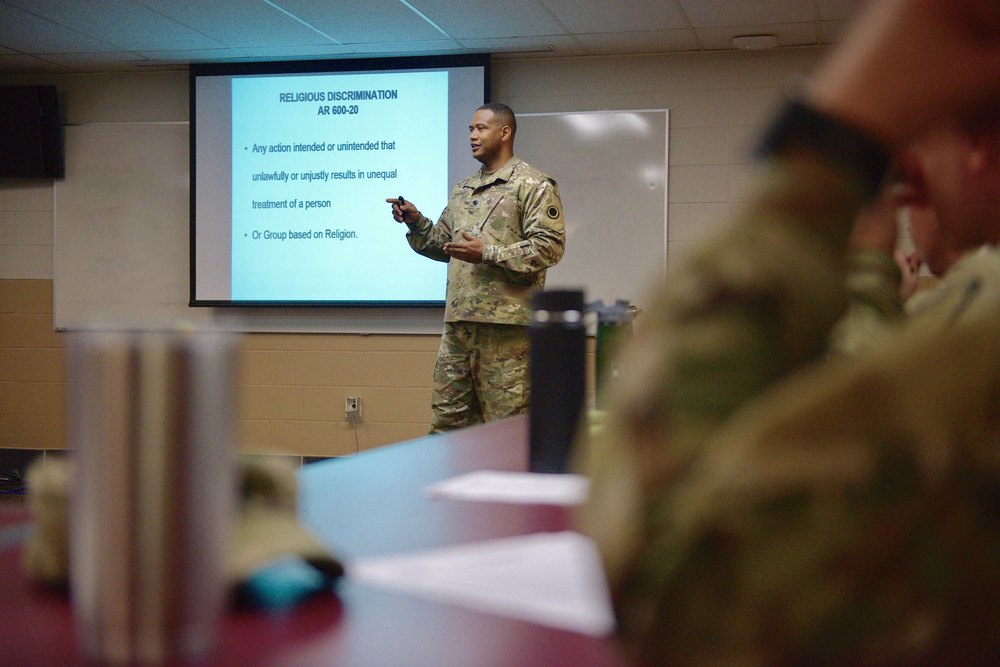 Soldiers of the 34th Red Bull Infantry Division were visited by one of the U.S. Army’s five Muslim chaplains, Chaplain (then-Lt. Col.) Khallid Shabazz from Fort Lewis, Washington, for professional development in April 2017.

While chaplains provide religious services exclusively in their tradition, they must also serve a diverse range of service members and their families; the chaplaincy recognizes over 200 different religions.9 In 2017, the Minnesota Army National Guard's 34th Red Bull Infantry Division met with Army Chaplain Khallid Shabazz, who at the time was a Lieutenant Colonel, Deputy I Corps Command Chaplain, and one of just five Muslim chaplains in the Army at the time, for professional development and education about Islam and other traditions.10 While there may not be much diversity, Muslim soldiers said fellow service members provide religious accomodations and primarily focus on a soldier's performance, not their religion.11 Nonetheless, the opportunity to engage with Chaplain Shabazz and the Minnesota Muslim community allowed the soldiers to find common ground with different people and helped dispel negative Muslim stereotypes, a critical step in helping chaplains provide meaningful spiritual care for different religions.12 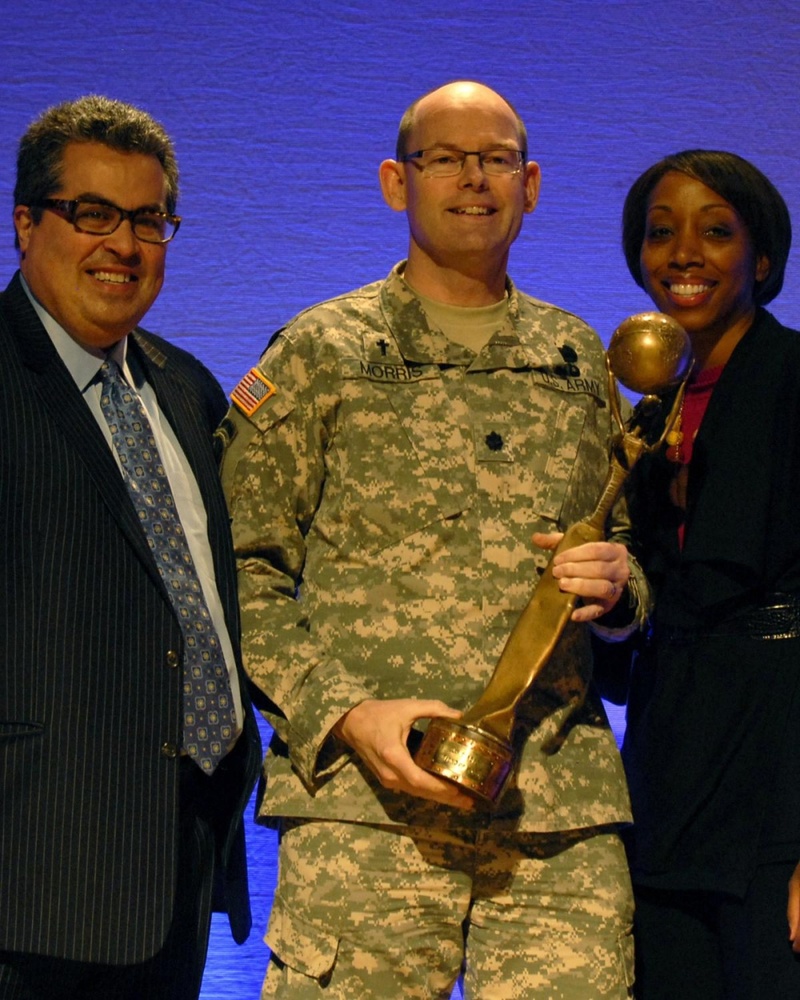 Chaplain (then-Lt. Col.) John Morris of the Minnesota National Guard received the 2011 Winds of Change award at the Minnesota Multicultural Forum for his extensive work in the state's Beyond the Yellow Ribbon program, which became the national standard for combat veteran reintegration programs in 2008.

Retired Colonel John Morris served as the Minnesota National Guard State Chaplain and the Army National Guard Staff Chaplain. He helped start a program in Minnesota called Beyond the Yellow Ribbon, which helps reintegrate combat veterans into civilian life by partnering with Veterans Affairs and local organizations in communities across the state.13 The program focuses on three major goals: working with community members such as doctors, lawyers, clergy members, and law enforcement to help reintegrate veterans; training families to understand the issues their veterans will face upon returning home; and coaching troops themselves in reintegration, which can involve instruction about returning to employment, family life, and driving, among other aspects of civilian life with which them must become familiar again.14 The program also provides financial, legal, and psychological support to combat veterans and their families. The United States Congress made Minnesota's Beyond the Yellow Ribbon the national standard for combat veteran reintegration programs in 2008.15 Chaplain Morris received the 2011 Winds of Change award at the Multicultural Forum on Workplace Diversity in Minneapolis for his pioneering work on the program after being selected from over 1000 Minnesota candidates.16

Minnesota has led the country in suicides of National Guard service members, the majority of whom had never been deployed, and thus the Beyond the Yellow Ribbon program has also incorporated suicide prevention training for chaplains and clergy members to better recognize and assist troops and combat veterans.17 Isolation during the COVID-19 pandemic was a further mental health concern that the Minnesota National Guard addressed in September 2020, Suicide Prevention Month, by helping service members build connections.18 Major Stephanie Christoffels, chaplain for the 34th Red Bull Infantry Division Headquarters Battalion, highlighted how chaplains and other service members can help by just lending an ear.19

When we listen, then we show people that we care. When we listen, we show that their life has meaning; that they are a person of worth, worthy of dignity and respect.
—Chaplain Major Stephanie Christoffels

The Minnesota National Guard's largest domestic deployment ever came in the wake of George Floyd's murder in Minneapolis on May 25, 2020.20 In 2020 alone, it oversaw about 60 missions "in support of civil unrest operations."21 The chaplains said that their focus in these deployments was on "building bridges within tense communities and bringing faith-grounded calm and comfort to the front lines."22 Chaplain Captain Sam Houston, a Baptist pastor and the only Black chaplain in the Minnesota National Guard, said the objective following Floyd's murder was to provide a safe environment for peaceful protest.23 He witnessed the internal tensions that service members experienced as protesters jeered at them, unaware that many wanted to join the protests themselves.24 Chaplains, who do not carry arms, were of utmost importance in de-escalating such confrontations and helping conflicted soldiers work through difficult ethical dilemmas.25 Michael Creagan, the Guard's only Catholic chaplain, conducted Mass and offered Rosary beads to service members at the Minnesota State Capitol while they were stationed there to protect it.26 He said that he has studied other religions and their sacred texts to better provide for the troops of many faiths who he must provide with spiritual care.27

It's the basic right of the free practice of religion. We pluck them up and deploy them, but they need to have their rights protected.28
—Chaplain Michael Creagan