"Things that anchor us, and ground us in the past often are resources for helping us move into the future . . . I think ritual is an under-recognized part of this work."
—Rev. Dr. Verlyn Hemmen 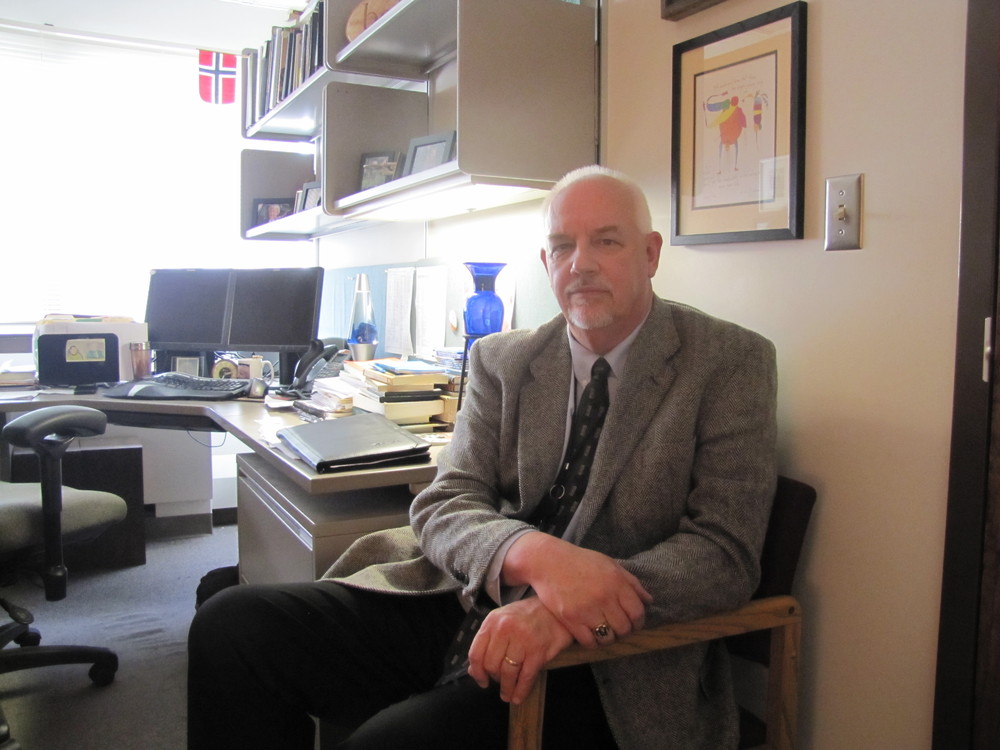 Rev. Dr. Verlyn Hemmen in his office at Abbott Northwestern Hospital in Minneapolis, where he served as Program Manager of Spiritual Care and Pastoral Education from 2012 to 2019.

In the Allina Health system, a large health care provider in Minnesota, Rev. Dr. Verlyn Hemmen has served as the Clinical Pastoral Education (CPE) Supervisor and Metro Director of the CPE Program. As Metro Director, Rev. Dr. Hemmen explained, "I am responsible for the coordinating and staffing of chaplaincy services at the five metro hospitals: Mercy [in Coon Rapids] and Unity [in Fridley], United [in St. Paul], St. Francis [in Shakopee], and Abbott Northwestern [in Minneapolis]. I am manager of the staff at Abbott Northwestern as well." This is distinct from his role as CPE Supervisor, where he "supervise[s] students in a national program of action/reflection learning that seeks to raise awareness of persons as minsters and offers small group and individual learning situations that invite deeper spiritual grounding and wider pastoral capacities for ministry."

Though Rev. Dr. Hemmen felt a calling to be a minister at a very young age, his experiences with ministry introduced him to the world of CPE. He described the path that led him to hospital chaplaincy.

I'm an Iowa farm boy and when I was five years old I told my parents I was going to be a minister, and I've never really wavered from that thought. I went through all of my school years, high school and chose a small college within my denomination, which is the Reform Church of America, to go to a small college in northwest Iowa. The better part of my story is that when my wife was playing with her dolls as a child she always pretended that she was a minister's wife. We met when we were 15 years old; she's from North Dakota. I've been married for 39 years [as of 2013]. Over that time period I went right through college as a psychology major and went to seminary with a focus on spiritual care, pastoral care. In the course of my seminary career I took my first unit of Clinical Pastoral Education, which was an incredibly powerful experience in terms of dealing with my feelings and how the suffering of others impacted me.
—Rev. Dr. Verlyn Hemmen

His experience with CPE inspired him to further pursue chaplaincy and work with people experiencing pain in hospital settings as well as parishes.

It led me to finish my seminary and then take a year of Clinical Pastoral Education at a, at the time it was the third largest psychiatric hospital in the country, known as Pine Rest in western Michigan. I worked with adolescents and some adults. There again the profound suffering people went through, mentally, was quite impactful on me. I think because of those experiences after I left Pine Rest I worked at three different churches and always no matter what my role was (a senior pastor, a solo pastor, a co-pastor, an associate pastor), people sought me out for working through their personal pain. Through that experience I started working through a doctorate in ministry with an emphasis on pastoral care. I was always intrigued by the more unusual forms of care, other than the traditional psychological approaches. I became fascinated by neuro-linguistic programming and the use of therapeutic metaphors to heal the wounded child within. So I did my doctoral thesis around that very thing, therapeutic metaphors and how they compare to the Old Testament songs of lament. All that I finished in 1995 and took a year off to balance myself out again and then started training as a Clinical Pastoral Education supervisor. I've been doing that now [since 2000] at two different hospitals. I was at United Hospital for 11 years, and [as of 2013] I've been here just for a little over a year at Abbott Northwestern.
—Rev. Dr. Verlyn Hemmen

Like other chaplains, Rev. Dr. Hemmen centers the patient's needs in his work. He explained the role as to "come alongside them and remind them that they are not alone" and to "remind them that they have far more resources for coping with what they may be experiencing than what they might be able to realize at the time." He described his focus on what the patient wants, and what will be conducive to their care. Part of ensuring patients have their religious needs met involves supporting their ritual practice, and he described the types of questions that help him determine how best to care for a patient.

Are there spiritual resources that you use that are important to you, that have meaning for you, that could be helpful for you at this time? For some people its, 'Well I pray everyday' or 'It helps me when people pray for me,' so we certainly do that. Sometimes, if there are sacred texts that they use depending on what religious background they have. Sometimes it's meditation, sometimes it's just the presence of family or another human being.
—Rev. Dr. Verlyn Hemmen

For some religious patients, he noted that ritual can provide a sense of stability and comfort in times of immense difficulty and change.

I think the power of ritual cannot be understated in this process too. Sometimes it's with the anointing of oil, sometimes sage is used for some things, sometimes a touch, a holding of the hand, something ritualistic like that, or the recitation of a familiar prayer, or a passage. Things that anchor us, and ground us in the past often are resources for helping us move into the future. To be able to say, 'You may never hear these words the same way again but these words have been with you all your life and here they are at the end of your life still.' I think ritual is an under-recognized part of this work.
—Rev. Dr. Verlyn Hemmen

Ritual, as Rev. Dr. Hemmen defined it, is far more than just communion for Christian patients or the burning of sage in Native American smudging ceremonies. Rather, ritual does not necessarily have to be religious, but can be something that is significant or anchoring for the patient. For some patients, he noted, song acts as a form of ritual.

We have some chaplains [at Abbott Northwestern] who are really good at singing with patients. The older patients with their hymns in particular, it means a lot [to them]. The power of imagination and the power of remembering are big, big pieces of the work we do. Remembering who we are but what are you hoping the next few days or hours will be like? Having people get out of themselves to look to the future is a powerful tool as well.
—Rev. Dr. Verlyn Hemmen