By Kevin Dowling with contributions from Will Yetvin

Throughout America, there is a new recognition, on the part of many, of the concept that man is a whole being. He is physical, he is spiritual, he is mortal, and he is social in his total health…. The faith of the individual patient is a vital factor in total health. The patient must be treated and cared for within the scope of that faith….
—Paul McCleave, Director of the American Medical Association's Department of Medicine and Religion 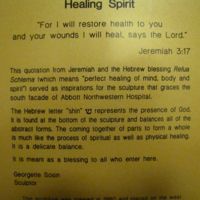 This explanation, from the sculptor, George Sosin, explains the meaning of the “healing spirit” and the symbolism behind the secular hospital’s large statue. 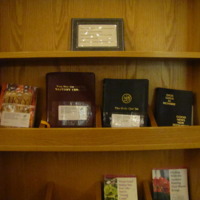 A picture of religious texts housed in the Ewe Chapel at Abbott Northwestern Hospital.

Reverend Ken Burg’s card at Abbott Northwestern Hospital lists his office and pager numbers, his affiliation with the Spiritual Care and Pastoral Education department, and specifies that he is the Chaplain on the Advanced Heart Failure Team. He was first hired because the Minneapolis Heart Institute, a part of Abbott Northwestern Hospital, had requested that a chaplain join a team already composed of doctors, surgeons, nurses, coordinators, pharmacists and social workers in order to to meet all of the patient’s needs during their stay. Rev. Burg admitted that patients are sometimes confused or irritated by his presence when they first meet the care team. He recalled that on one occasion an agnostic patient asked him to unceremoniously “get out” after he had introduced himself alongside the patient’s doctors.1

Rev. Burg knows that as a chaplain it is important to never take getting kicked out of a patient’s room personally: “I knew the patient was very lonely, so I didn’t give up,” and on a subsequent visit “I said I’m not here to talk about religion. I’m just here to support you.” Over time his visits with the patient grew to be between 30 and 60 minutes long and they became good friends.

The patient’s confusion and dismay are especially understandable given that The Merriam Webster Dictionary defines a chaplain as “a priest or other Christian religious leader who performs religious services for military group (such as the army) or for a prison, hospital, etc.” Yet this definition is an inadequate representation of the realities of modern hospital chaplaincy. This exhibit explores the role and history of the modern-day hospital chaplain, as well as some of the misconceptions about their jobs that they encounter daily.

The Merriam Webster Dictionary defines a chaplain as “a priest or other Christian religious leader who performs religious services for military group (such as the army) or for a prison, hospital, etc.” Yet this definition is an inadequate representation of the realities of modern hospital chaplaincy.