Based on the Merriam-Webster definition of chaplain as "a priest or other Christian religious leader who performs religious services for a military group (such as the army) or for a prison, hospital, etc." one might conclude that a chaplain is essentially a member of the clergy. In some cases, this is true, but hospital chaplains who are also members of the clergy understand their two roles to be quite different from one another. Reverend Ann Bergstrom, a Lutheran pastor and chaplain at the Walker Methodist senior care communities in Minneapolis, has often visited sick, elderly or infirm congregants and has a unique perspective on what it's like to care for people as both a pastor and as a chaplain.

I worked part time as a parish pastor and as a chaplain, two different roles. As a visitation pastor, I was going to see members on behalf of their own church and their own tradition. It's a different role [than] that [of] a chaplain. A chaplain does not go and represent a specific tradition. I go to simply be with them in their tradition that they find meaningful, or sometimes no tradition. Not everyone finds organized religion to be meaningful, for some people it may be science or nature or a political system. As a chaplain I'm always listening for what it is that gives a person meaning and identity.
—Rev. Ann Bergstrom 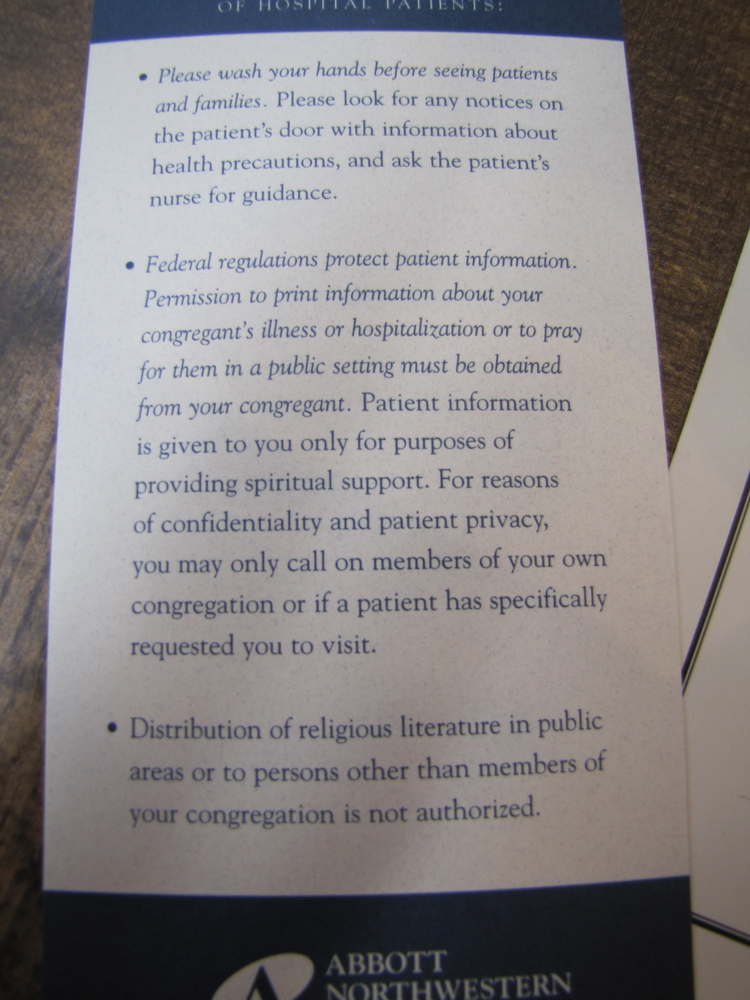 A leaflet at Abbott Northwestern Hospital in Minneapolis detailing the rights of patients and institutional limitations on what members of the clergy may do in a hospital.

Rev. Dunbar-Perkins describes her reaction to the death of a young woman and the differences between chaplaincy and the clergy in coming to terms with medical situations that seem unjust.

I see a 21-year-old young woman, just, just married, just had a baby and discovered cancer after her birth with the baby, and she was dead within three months or, I don't remember it, it was quick, and I'm like: 'God, hey what’s this, what is this?' And we all know God doesn't cause this, but if you're feeling that way you might as well just say it. And allowing people that, that's one of the differences between chaplaincy and parish ministry in, in, in the general sense, because I know some parish ministers who will go there. But the parish ministers don't always have the luxury of opening up those spaces to really let people say those things, where we do. They can say whatever and still feel blessed because I’m not going to say, 'Okay, therefore I'm turning you in to God and you will be going to hell when you die because you said these things.' [laughs] No, we don't, we don't, we don't do that, and so that's one of the biggest differences and some parish ministers are not skilled enough to do it but many of them probably have the heart to want to do it but they just don’t have the venue to be able do it as often as they may want to, whereas this is kind of what we're called to do, here in chaplaincy.

Rev. Bergstrom's experiences highlight the uniqueness of the chaplain's profession. While religion is often a framework from which people make meaning, not all patients are religious, and not all religious people find that their religion is the most meaningful element of their lives. The hospital chaplain instead focuses on what is most important to the patient, to help them make meaning out of whatever they find important, be it religion, spirituality, nature, or science.

Like Rev. Bergstrom, Rev. Denise Dunbar-Perkins has personally experienced working both as a member of the clergy and a chaplain. Rev. Dunbar Perkins is a self-described ‘Bapiterian,' a Presbyterian pastor with roots in the African-American Baptist tradition, where having faith often meant allowing no room for doubt. Now, as a chaplain, she acknowledges that one of the challenging parts of her own changing faith was allowing room for doubt, and allowing herself to question God, especially when a patient’s situation seems particularly unfair. Rev. Dunbar-Perkins recognizes the importance of providing a safe space for patients to question their own faith, condemning the expression that “God never gives you more than you can handle.” Here, Rev. Dunbar-Perkins describes her reaction to a particularly unfair death and describes how providing a safe, non-judgmental space for patients to question is a general difference between chaplains and the clergy.