According to Doris L. Bergen, a scholar on military chaplains, the "role of the [military] chaplain [is to] to embody courage, hope and steadfastness in the face of alienation and destruction." 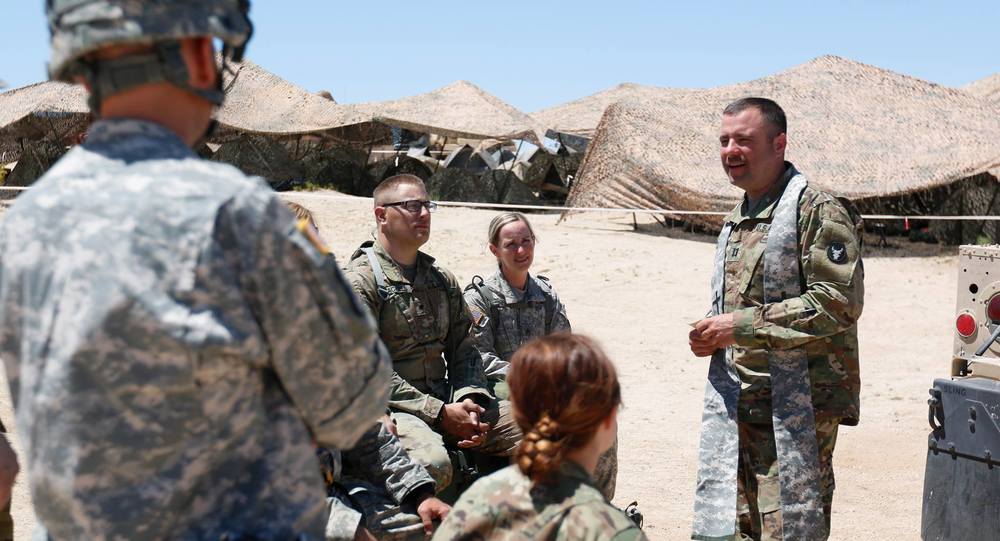 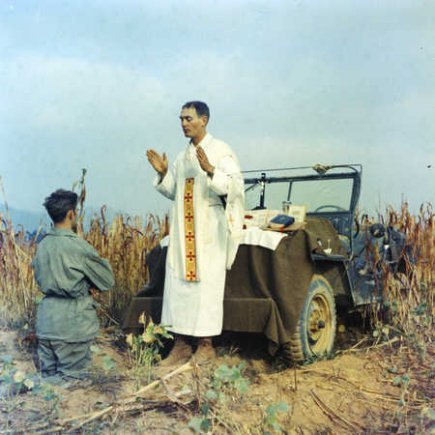 Captain Chaplain Emil Kapaun holding Mass in Korea in 1950, using the front hood of a Jeep as his makeshift altar.

Military chaplaincy has existed in a recognizable form for nearly 1600 years, dating back to the Roman Empire, where evidence suggests that "Christian clerics occasionally [were] found attached to stationary Roman army units."1 Even the word itself traces its origins back to the ancient fields of battle where "around 800 C.E., the word 'chaplain,' in its Latin form, capellanus, first appeared to describe those clerics who carried into battle the relics of the saints, including the soldier's cape of St. Martin."2 In the modern world, however, military chaplains are neither solely Christian clerics nor do they continue to carry relics into the field of battle. Rather, modern chaplains, as described by Veterans of Foreign Wars, are no longer fighting men.3 In the United States, chaplains "were no longer permitted to carry weapons" after the Civil War.4 And today, chaplains are supposed to be issued a Geneva Convention Identity Card, separating them from the combat role of the soldiers for whom they care. Today, modern military chaplains in the United States are "ordained clergy, endorsed by their faith group to serve all people regardless of religious or non-religious affiliation."5

Despite their role as noncombatants, chaplains serve and live with those whom they serve. According to Doris L. Bergen, a scholar on military chaplains, the "role of the [military] chaplain [is to] to embody courage, hope and steadfastness in the face of alienation and destruction." This sentiment is most evident in the story of Emil Kapaun, a Roman Catholic priest and U.S. Army chaplain during World War II and the Korean War, in which he became a hero.6

A diocesan priest from Wichita, Kansas, Kapaun arrived in Korea in July 1950. Four months later, Chinese forces captured him and a group of soldiers he had refused to abandon, even when he had an opportunity to escape. From the moment of surrender through his own illness and death in May 1951, Father Kapaun proved fearless in his ministry. When an enemy soldier prepared to shoot a wounded GI, Kapaun pushed the man away, pulled his comrade to his feet, and supported him along the hundred-mile trek to a POW camp. During seven months of imprisonment Father Kapaun encouraged his soldiers, prayed with them, stole food for them, washed their undergarments, and buried them when they died . . . The Catholic War Veterans of the United States are seeking sainthood for Father Kapaun.7
—Doris Bergen

Kapaun bravely rescued and attended to the wounded and dying, and ministered to the living as well. He died in captivity in 1951. During his life and afterwards, he was awarded the Purple Heart, the Bronze Star Medal, the Legion of Merit, and the Medal of Honor. In 1993, Pope John Paul II named Kapaun a Servant of God, the first stage in the process of canonization as a saint.8