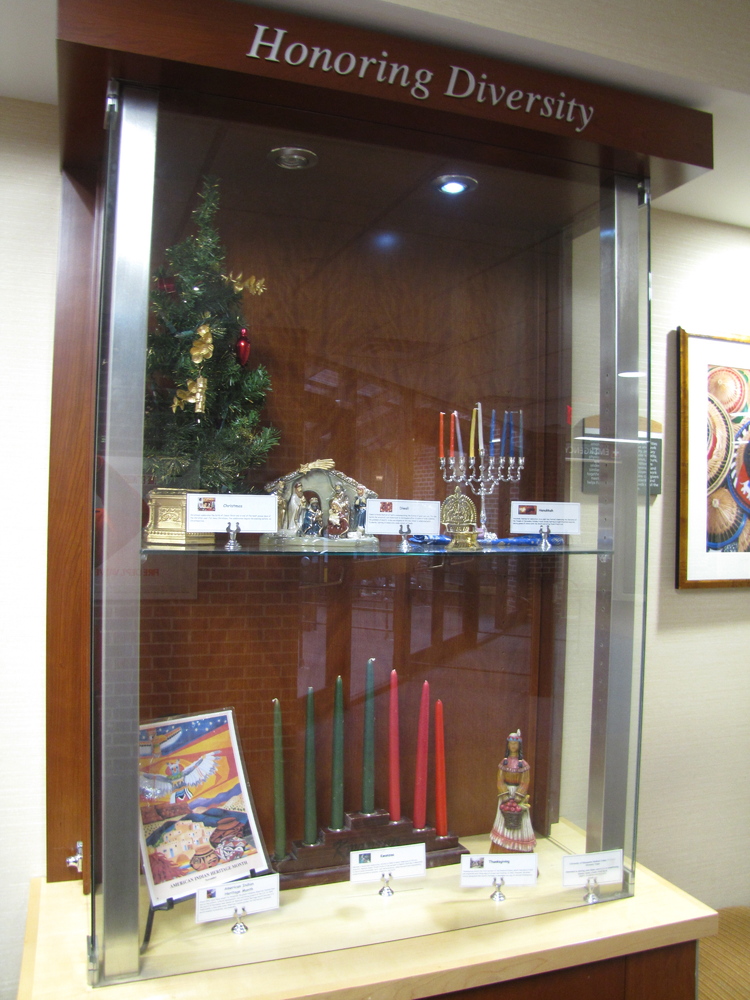 This display, titled “Honoring Diversity,” was located in the University of Minnesota Medical Center’s Lobby and honored patients’ religious and cultural diversity. 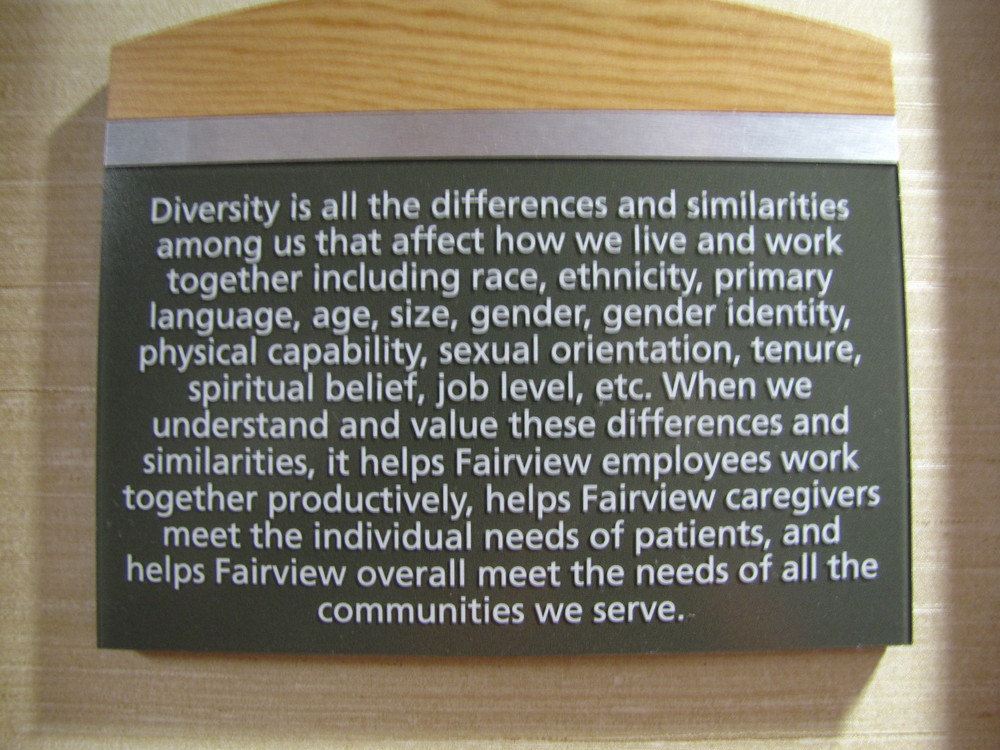 The signage alongside the “Honoring Diversity” display highlights what diversity means and why it is so crucial to strong and thoughtful health care.

United Hospital, part of the Allina Health system, is the largest hospital in the Twin Cities east metro area and serves more than 200,000 patients and their families each year.1 Though the sprawling brick complex that houses the hospital's facilities dominates several blocks of the Saint Paul cityscape, it is eclipsed by the massive Catholic Cathedral of Saint Paul that rises above the hospital on the other side of a multi-lane highway. The proximity of the hospital to the Cathedral seems fitting given that at any one time, Catholic patients occupy between 80 and 100 of the hospital's 300 total beds. To accommodate the large Catholic population, the hospital has a full-time Catholic priest on staff.

Although United Hospital's primary patient population is Christian, more non-Christian patients have been admitted to the birthing center in recent years. Reverend Shawn Mai, a Lutheran chaplain and manager of chaplains and Clinical Pastoral Education (CPE) at United Hospital, has personally experienced this diversity. He had only been at the hospital for a few months when he was called to participate in an ethics consultation, where chaplains help facilitate a conversation about ethics and patient care. This particular ethics consultation concerned a Hmong woman in the hospital's labor and delivery unit. The patient, who was 28 weeks into her pregnancy, was suffering from a dangerous, unexplained, and potentially life-threatening spike in her blood pressure. Rev. Mai served as a mediator between the patient's spouse and her doctors.

There was a Hmong woman in labor and delivery who was at 28 weeks in her pregnancy and it randomly happens with women [they] develop this condition that raises the blood pressure to dangerous levels and the only way to address the affliction is to deliver the baby. So she was in pretty dire need of getting labor induced and getting the baby out of there so she could get stabilized. And after the baby would need to go into the NICU. So I got called in because the father wanted to bring the mom home and wanted to consult with the elders before giving consent for labor being induced. If she would have left the hospital she probably would have stroked and died.

So I got called in and I enter into the mix aware that they're Hmong and what I do is walk in with curiosity about what is meaningful and what do they need along with this ethical issue of how do we respect their spirituality and also the physical needs of the mom. So I worked with the translator, they didn't speak any English, and I more than anything else in that situation was a listener between medical staff and the family. I could tell the husband was just overwhelmed by all of this information, he just wasn't taking it in. So what I ended up doing was I just talked to him, and he was able to speak some English, about what he valued and where that decision was coming from. Basically [for the family] the husband was seen as the final decision maker, and understanding that dynamic [was important]. The mom had wanted to have labor induced and what I found out was that the father felt like she didn't ever listen to him. This was a situation where I think he felt some power so we were able to talk through that and he was finally able to agree about her going into labor.

But in that situation I didn't replace the elders but facilitated decision-making. So the other part of that is using community resources to provide support for people in their faith tradition like the Islamic Center of Minnesota for a Muslim patient who wants particular support in a particular way. My chaplaincy work is with people of all different kinds of faith traditions.
—Rev. Shawn Mai 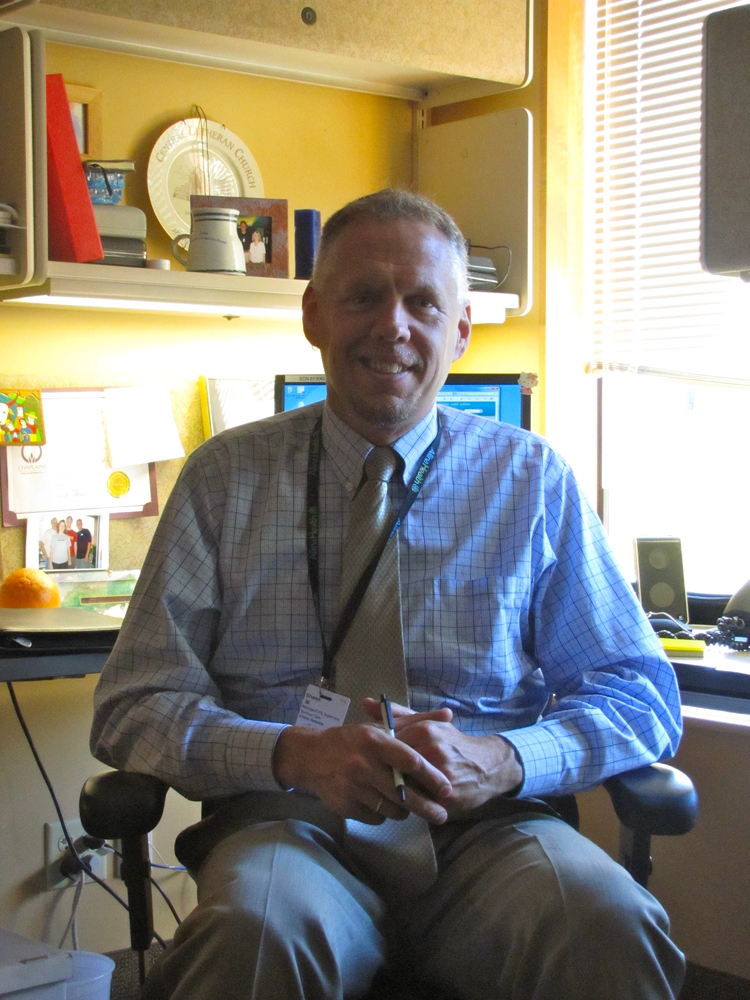 Rev. Shawn Mai, Lutheran chaplain and manager of Clinical Pastoral Education (CPE) United Hospital in St. Paul, once helped save a Hmong woman's life by mediating between her doctors and her husband, crossing barriers of culture and language to arrive at the best medical decision.

In his story, Rev. Mai was not brought into the birthing center to serve as a religious presence. Instead, he viewed his role as a non-anxious presence, advocating for the necessary medical treatment across cultural boundaries. In many ways, Mai served as a cultural translator between the medical team and the Hmong father. Though he was not intimately familiar with the patient's tradition, Mai sought to connect with her spouse in order to help him make the best medical decision. Furthermore, this story illustrates one of many ways chaplains serve people from all walks of life and why comfort with cultural and religious diversity is so necessary for the profession. Rev. Mai's story also complicates the perception that chaplains serve a passive role in the secular setting, only responding to the needs of their patients and never challenging them. In this instance, when speaking with the Hmong father, Rev. Mai brought the qualities and objectives of a chaplain into a conversation about navigating complex medical decisions.