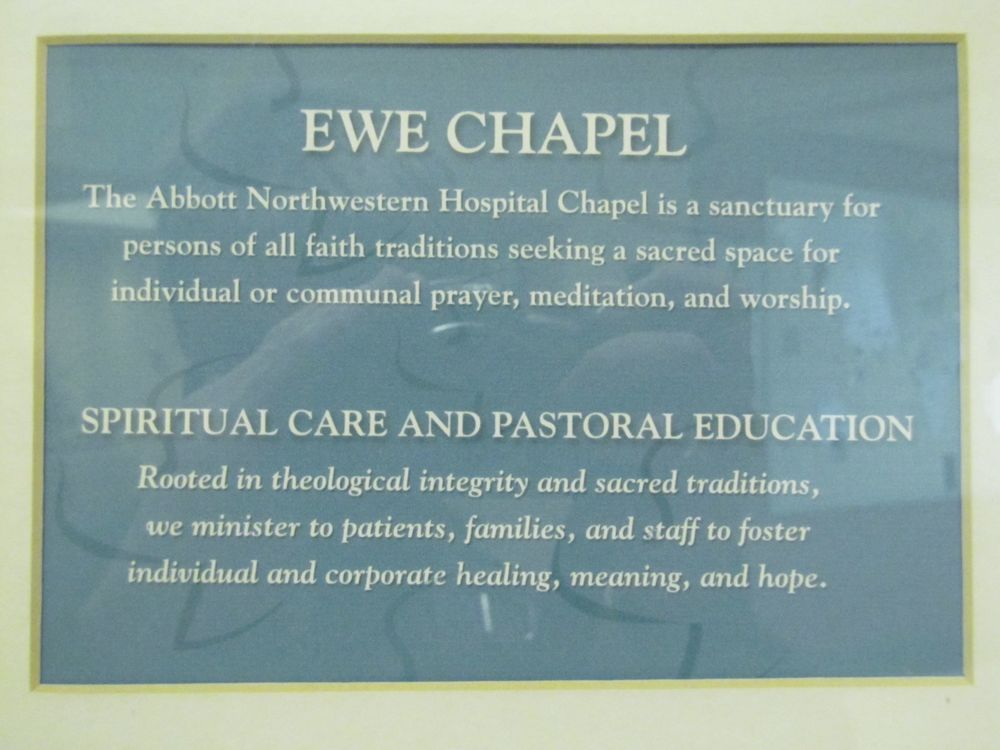 The welcome sign outside the Ewe Memorial Chapel at Abbott Northwestern Hospital in Minneapolis affirms the hospital's spiritual care mission of supporting all faiths in healing of the body and soul by providing an inclusive space for prayer, meditation, and worship.

For chaplains, prayer extends far beyond the confines of the chapel walls. For many of those interviewed, prayer is a tool with which to heal and comfort patients as well as a means of bringing them into a conversation about their experiences with their illness. Rev. Dr. Verlyn Hemmen, who supervised the chaplains and the Clinical Pastoral Education (CPE) program at Abbott Northwestern Hospital in Minneapolis for nearly 20 years, said that "prayer can [not only] make one open to healing" but that "prayer can [also] perk people up." Likewise, Rev. Burg, a staff chaplain at Abbott Northwestern since 2011, said that prayer "might not change the outcome for a patient but it might help them to shift their attitudes about their illness." However, prayers are only given when a patient asks for them; a chaplain might visit many patients during their shift and not pray because none of the patients want them to.

Rev. Dr. Verlyn Hemmen, who supervised the chaplains and the Clinical Pastoral Education (CPE) program at Abbott Northwestern Hospital in Minneapolis for nearly 20 years, said that "prayer can [not only] make one open to healing" but that "prayer can [also] perk people up."

Rabbi Liberman discusses how she offers support for non-Jewish patients through interfaith language.

I speak in a more interfaith language and more inclusive language, for sure and trying to be able to stand there in my own skin, but also be available to them. So I'm not gonna pray in the name of Jesus, but it's not a Jewish prayer to say in the name of anybody. So like, for example, I will say, 'in the name of God.' Which is a doorway to open to them and it's okay for me to do. If I'm with a Jewish patient, I don't even have to go there, because I know what the particularity is of our faith tradition.

When the chaplains do pray, they always cater to the needs of the patient. Prayer does not have to come from a chaplain's own tradition and is guided by the patient. Rabbi Lynn Liberman, a former chaplain resident at Abbott Northwestern, said that she was not at the hospital for the Jewish patients only and that she always introduced herself as Chaplain Lynn in her unit, unless she was summoned specifically to be with a Jewish patient. By using more general language, Rabbi Liberman could offer support for different faiths and non-Jewish patients who asked for prayer.