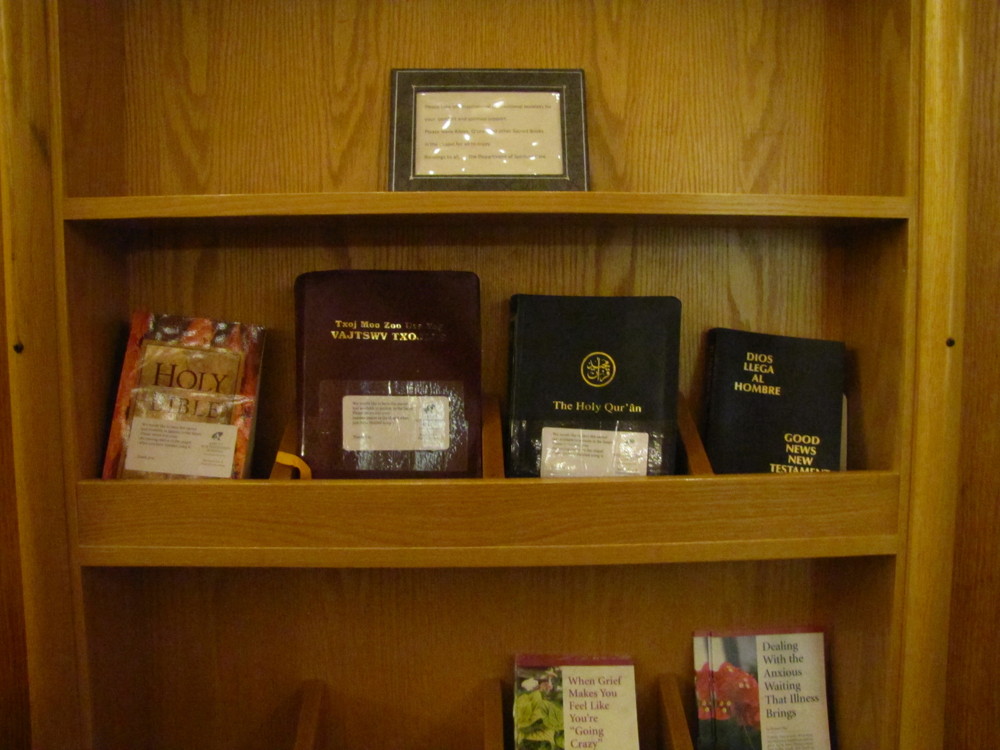 The sacred texts in the Ewe Memorial Chapel at Abbott Northwestern Hospital in Minneapolis reflect the diverse faiths of patients and include the Holy Bible, the Holy Quran, and translations of the Bible in both Hmong and Spanish.

Though hospital chaplaincy today is at its most diverse point in history, the profession remains disproportionately Christian. In 2010, 88.6% of hospital chaplains identified themselves as affiliated with a 'Christian' tradition, compared to 75.2% of the nation's population.1 As many states, and the country more generally, face increasingly diverse populations, it is important to consider issues regarding the demographics of hospital patients and chaplains. Marni Schreiber, a former intern with the Spiritual Care Department at Allina Health, a large health care provider in Minnesota, described the reality of religious diversity in the field of hospital chaplaincy.

Most chaplains in America are Christian. Chaplaincy from the start has been a historically Christian-based practice across the nation, Jewish chaplains are spreading, Buddhist chaplains in particular are spreading pretty quickly but there is a lack of particularly Muslim chaplains. There’s a huge discrepancy in chaplaincy not just in Minnesota but across the US . . . Most of the Chaplains at Allina are Christian, actually starting now I think they have a resident who is Buddhist.
—Marni Schreiber

In terms of diversity, the, one of the challenges also is not just the diversity of the patients but the diversity of the caregivers, the chaplains. And I think in the twenty-first century this is another shift that we're looking at, we're having more, hopefully, we're having more chaplains of color and of different religious traditions, not just the Christians. And how that affects the care of the patients, how we make sure that they are trained and oriented to the same sensibilities around visiting the patients, meeting them where they're at and walking the journeys with them and opening up the spaces, but also being rooted in your own theology. And not getting that mixed up with my theology trumps theirs, but rather your theology roots you and holds you there. And that's going to be the new challenge for us as we train more chaplains is to make sure that happens. I don't want to see a future where, 'Okay you’re the Jewish chaplain so you only see the Jewish patients,' because this particular Jewish person may have so many other gifts to give other people. You know, I could be relegated to just the African American patients, yeah, well, I'd rather be able to see the breadth of the people here. So that's one of the things that I'm really looking towards is having more chaplains of more traditions and really making this a spiritual journey. Who knows, we may be just like, I think it's Harvard that has a humanist chaplain and I'm still having difficulty embracing it, but my mind and my heart says that's the way to go. It's going to redefine chaplaincies in so many different ways but it's still talking about the journey of the spirit, the soul, or the psyche, whatever word you want to put on it.

Rev. Denise Dunbar-Perkins, a retired staff chaplain at Abbott Northwestern Hospital in Minneapolis, part of the Allina Health network, also discussed the lack of diversity in the field of chaplaincy. However, she clarified that while a more diverse chaplain core is essential, it shouldn't mean that chaplains only care for patients from their own religious denomination or tradition.

I don't want to see a future where, 'Okay you’re the Jewish chaplain so you only see the Jewish patients,' because this particular Jewish person may have so many other gifts to give other people. You know, I could be relegated to just the African American patients, yeah, well, I'd rather be able to see the breadth of the people here. So that's one of the things that I'm really looking towards is having more chaplains of more traditions and really making this a spiritual journey.
—Rev. Denise Dunbar Perkins 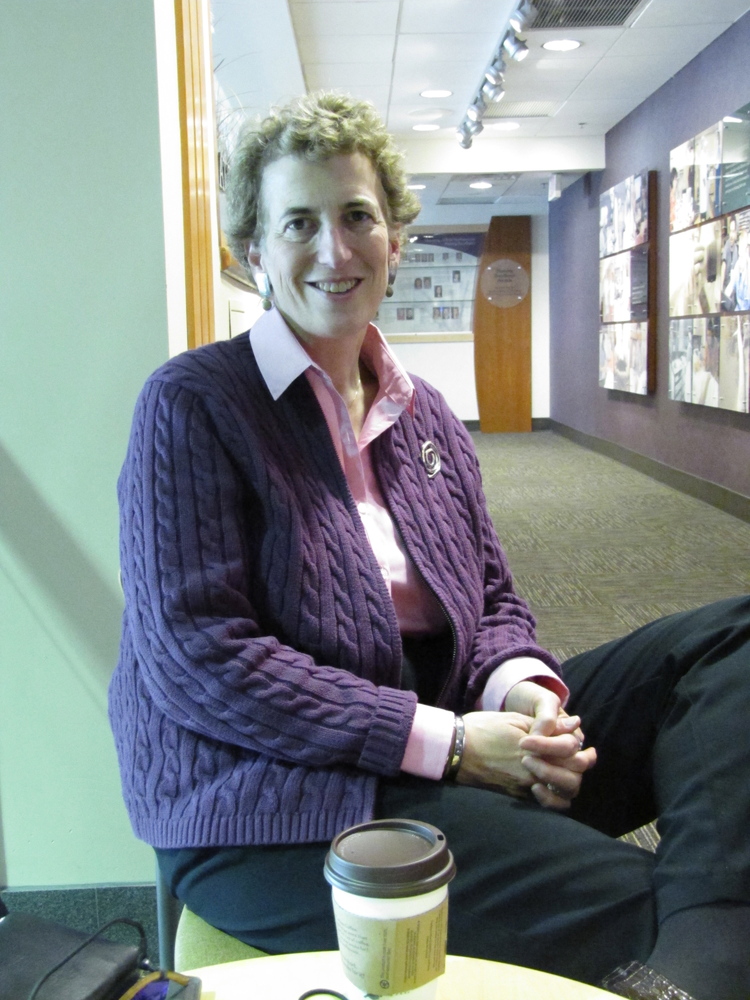 As a rabbi and former resident chaplain at Abbott Northwestern Hospital in Minneapolis, Lynn Liberman could successfully provide spiritual care to patients of all faiths. She noted subtle differences in her language and feelings when working with Jewish and non-Jewish patients.

Rabbi Lynn Liberman, a former resident chaplain at Abbott Northwestern, is part of the diversification process that includes non-Christian chaplains. However, even though she is a rabbi, non-Jewish families are often unaware that her religious background is any different than theirs. This phenomenon is not unique. Chaplains are trained "to minister out from their theology," meaning they ground themselves in the most basic tenants of their faith while also, to a large extent, setting aside their own beliefs when caring for patients.

Though Rabbi Liberman is not just a chaplain for Jewish patients, when a Jewish family requests a Jewish chaplain or rabbi, she could offer unique services, counsel, and insight that other chaplains may not have been able to provide. She said that she used slightly different language when introducing herself to non-Jewish patients and that, while the interfaith job of a chaplain was rewarding, she also enjoyed connecting with patients from her own faith.

That's the interesting thing about being a particularity; I'm not here for the Jewish patients in particular. You walk in a [patient's] room and you always introduce yourself as 'Hi my name is Lynn and I'm the chaplain in this unit or I'm the chaplain and I'm here to . . . but when it's [a] Jewish family and I've been asked, I'll walk in and say, 'Hi I'm Rabbi Liberman and I'm a chaplain here on staff.' The difference is really interesting to me. It's nice sometimes to talk in the language and the tradition that I love.
—Rabbi Lynn Liberman

Rabbi Lynn Liberman discusses the diverse group of resident chaplains that she was a part of and the importance of the broader faith community in helping patients address profound questions.

This is a very interesting year, I don’t know if they've had a year of residents like we are, but the joke in Minnesota is that you're likely to run into, any religion you're likely to run into it will be Lutheran, because you've got so many here. But in my resident group, we have myself as a rabbi, we have a Baptist, we have a Presbyterian, and a Buddhist monk. And not a Lutheran amongst us, which is always my tagline. Even our supervisor is Presbyterian, so it's really a very diverse group and a very special group of people. We talk about often the fact that the vast number of people that any of us meet are not our religious tradition. Like there's no, very seldom are there, there's no Catholic amongst us and [there are] a lot of Catholics in the hospital. I think we're all trying to say that faith in the world is the important issue and we're people of faith. We bring our particularity but my particularity in any moment with a patient is not as relevant as what is their need in the moment. So what we talk about and the issues that we are concerned with, I think when we're meeting with patients, are the large issues of life. And most of the time even a patient will say, 'Gee, it just doesn't really matter that I call God "Jesus" and you call God "God." We're on the same path.'

The notion of chaplain diversity itself may seem contradictory. Why is a diverse chaplaincy needed if all chaplains can see and work with patients of any faith? On the other hand, why would chaplains ever need to see patients of other faiths if the chaplain staff had enough diversity? The reality is that patients benefit both from the familiarity of chaplains who share their faith and from chaplains of different backgrounds who bring other perspectives. Marni Schreiber discussed the training that chaplains in the Allina Health system go through in order to "work with every faith."

Some people think that chaplains are trained so that they can interact with all people equally and I agree with that to a certain extent. At Allina they train their students to work with every faith so I understand why it's a slow process to arrive at a substantial diversity. But I do think that having [a] diverse chaplain core is essential especially for such a diverse city [Minneapolis].
—Marni Schreiber

The ability to serve all patients and also step into a specific role for patients of the same religious tradition is crucial to chaplaincy. Hospitalization can be disorienting and stressful, and knowing there is someone to help who shares your faith can be deeply comforting. However, while Rev. Dunbar-Perkins said that this is truly valuable for patients, she noted that when patients see chaplains from different backgrounds, they often benefit from the wide array of skills, perspectives, and personalities. Finally, chaplains learn a lot from each other, and patients likewise learn about other religious traditions from diverse chaplains.