Paul Twitchell was the ECK Master that, according to ECKists, brought the teachings on Eckankar to a different level. Born in Kentucky in the early 1900s, Twitchell served in the United States Navy during World War II and subsequently became a professional writer and reporter. “Twitchell was a religious seeker and dabbler in various new religious movements, including Scientology and the Self-Revelation Church of Absolute Monism.”1  The exact history of Twitchell’s purported spiritual journeys around the world and his work with various spiritual leaders is fraught and highly contested. Yet it was through Twitchell’s interest in and pursuit of religious and spiritual knowledge that he came to know Eckankar.

The high teachings of ECK had been scattered to the four corners of the world, and Twitchell gathered them and made them available to all.

John, the tour guide, explained that, “Twitchell’s job was to shift Eckankar from being a philosophical teaching to being a religion: ECK was being taught only through the inner, personal spiritual journey. Twitchell, as ECK Master, brought the teachings to the world.” As ECKists understand it, “The ECK teachings of the Light and Sound have been passed on to spiritual seekers by ECK Masters since before recorded history… Although the ECK teachings have ancient roots, Eckankar was introduced as a modern-day religion in 1965…The high teachings of ECK had been scattered to the four corners of the world, and Twitchell gathered them and made them available to all.”2 Twitchell was the spiritual leader of Eckankar from 1965 until his death in 1971.

Between 1971 and 1981, Darwin Gross served as the ECK Master. However, after Gross appointed Harold Klemp as the Mahanta in 1981, Klemp and the ECK leadership “would excommunicate [Gross] from Eckankar, ban his books from sale, and instigate a lawsuit against him for business impropriety and copyright infringement.”3 In a letter to Gross in 1984, Klemp wrote: “Do not directly or indirectly associate yourself or your activities with the sacred teachings of ECK or Eckankar in any way.”4 Court documents filed in the United States District Court in Oregon reveal a few of the details of Eckankar’s split with Gross. The files claim that Gross breached his contract with Eckankar by, among other things:

As a result of the split with Gross, Eckankar has effectively stricken his name and his service as the Mahanta from any and all texts and speech.

ECK is an evolving religion. —John 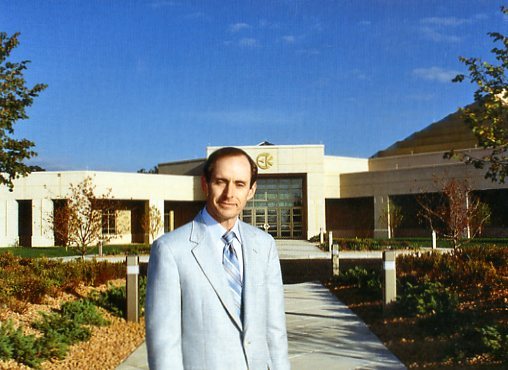 Harold Klemp has been the ECK master since 1981.

Harold Klemp, the current ECK Master, became the Mahanta in October of 1981. Klemp was raised on a Wisconsin farm and attended a two-room country schoolhouse. He went to high school at a religious boarding school in Milwaukee, Wisconsin, as well as preministerial college. After college, he enlisted in the U.S. Air Force, and he trained as a language specialist and as a radio intercept operator at Goodfellow Air Force Base, Texas. Klemp first encountered Eckankar during his two-year tour of duty in Japan.6 Klemp has written over forty-five books on Eckankar, as well as numerous articles and lessons. Several ECKists note that Klemp tends to keep to himself. However, Klemp usually speaks in public twice a year at the two major ECK seminars and, in the past, has traveled abroad and spoken at the ECK Temple in Chanhassen. Kathleen notes that the amount of interaction between the ECK Master and ECKists varies, “It's been different for each Living ECK Master, so there’s no specific rule around it.”

How one becomes the Living ECK Master remains fairly unclear. As John mentioned, “There probably is a selection process, I just don’t know what it is.” Kathleen offered her explanation of the process:

"When a transition is going to take place, it always takes place in October and it is the transition from one Living ECK Master to the next. Sometimes, the Current Living ECK Master will talk about it. Sri Harold talked about it at this most recent seminar [in April 2012] and said, “You know, there’s people in training, but nobody’s ready, so I’m gonna be here for a while!”…When [a transition to a new Mahanta] actually does occur, we call it the Passing of the Rod of ECK Power and when it actually does occur, usually most of the members of Eckankar have already felt it coming and sometimes they even know, they already have a feeling of who its gonna be. But it is something that’s divinely guided and then that person is introduced as the next living ECK Master. It's not political, it's not voted on like the Pope, or anything like that."7

An interesting aspect of the ECK leadership is its relation to gender. ECK Mastership is only open to males, based on perceived differences in “how the Spirit flows through a person,” said John, the tour guide. He continued:

"Men and women reincarnate into each other’s bodies, so, to be an ECK Master, I would have to be reincarnated into a male. It's not prohibited by what your soul is, but in what physical form you’re in. That’s just what the teachings are…The women don’t seem to have a problem with it."

Still, John acknowledged that, “ECK is an evolving religion,” so the prohibition on female ECK Masters could change. Kathleen expanded on this feature of Eckankar:

Our religion is a living religion in the sense that there is always a Living Master that can change things that have gone before. So, he can keep the teachings up to date and current with the current consciousness.