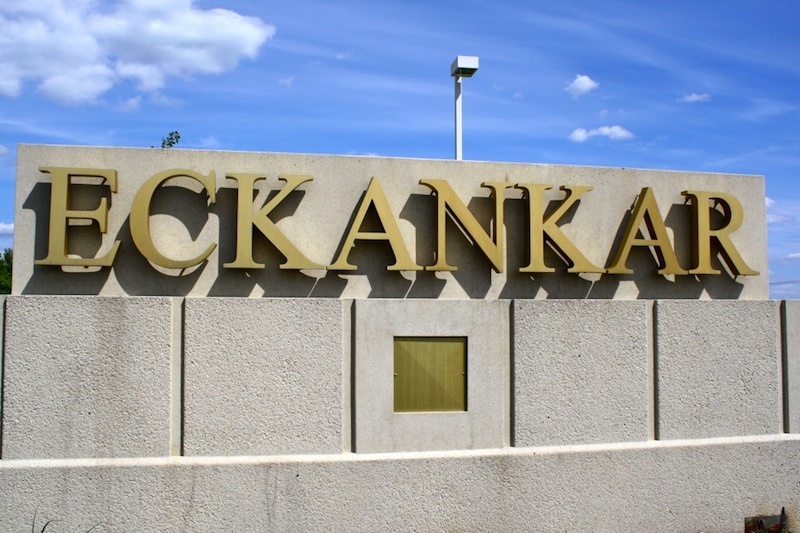 This sign welcomes ECKists and visitors to the Eckankar campus.

Followers of Eckankar, who call themselves ECKists, come from a variety of backgrounds, ages, and places. During my time learning about Eckankar, I met several wonderful and impressive individuals who contributed to my work in profound ways.*

Michael – Michael was my first tour guide on a visit to the ECK Temple on April 7, 2012. Michael, from Minnesota, was extraordinarily friendly, dressed in a tan suit, and gesticulating heavily over the course of our hour-long tour. Michael has been giving tours at the ECK Temple for fifteen years and is deeply interested in ECK artwork. He maintains hope that, one day, Eckankar will create a museum to feature the hundreds, if not thousands, of original pieces of art made by ECKists. He first discovered Eckankar when he picked up a book on the religion at an airport in Colorado. As he reassured me, “Nothing is a coincidence.”

Nothing is a coincidence. —Michael

John – I originally met John in the Reading Room at the ECK Temple in April, and he would later serve as a tour guide on a visit to the Temple in May. Quiet yet poised, with a deep voice, John fielded multitudes of complex questions about Eckankar over the course of the tour. In a subtly pointed and humorous way, John led the tour in an impromptu HU song and explained that although all Soul has a name, he has “never bothered to ask” what his is. He said that his exposure to Eckankar came from the fact that, despite being a Catholic altar boy, he “was pretty open to other ideas.”

Alice – Out of the ECKists I met, I spent the most time with Alice. An older, maternal figure, Alice’s friendly eyes, golden jewelry, and sweet, high voice remind you of the grandmother you always wanted to have. Alice had previous worked as a shiatsu massage therapist and, in the process, had traveled around the world to Asia and Europe. When I met her, she was leading the discussion of Harold Klemp’s book Autobiography of a Modern Prophet for the first time. Armed with a small notebook of quotations and questions she hoped to discuss, she eloquently and methodically shared her opinions of Klemp, the text, and its lessons, and invited other visitors to the HU song to read aloud and to share their thoughts. Alice was overjoyed to meet me. She excitedly reached into her purse after shaking my hand and procured a CD. “Here,” she said, handing me the disc. “Before I came here, I got the overwhelming feeling that I needed to bring an extra CD today. I had the feeling that there was going to be a new person here, and here you are.” At the close of the community gathering, Alice introduced me to her husband and gave me her card. She told me that I should join her at the Worship Service the next week and that I should call her the day before to confirm. I did just that, and we met up at the Temple on Sunday for worship. As we sat, she shared a seemingly endless array of feelings and insight about Eckankar, ranging from the highly theoretical (“Spirit is in all moments”) to the concrete (“The 13th century poet Rumi mentions HU in one of this books. I forget the name, but you’ll find it”). She is currently working on a book of prose called Remnants of Past HU Dancing. Alice’s focus in Eckankar, it seems, is on love and on sharing that love with those around her. She told me that, when she was raising her children, she had one rule: “I told them to put care into their actions, words, and thoughts, because if it is not for love, it is for nothing.”

I told them to put care into their actions, words, and thoughts, because if it is not for love, it is for nothing. —Alice

Carine – The organizer of a community HU song I attended in May, Carine served as a volunteer at the ECK Temple and held a position as a translator at several ECK seminars. Originally from France, her heavy and beautiful accent added a layer to her calm and steady speaking voice. Carine led the HU song we sang together, and her singing voice, reminiscent of a songbird, trilled a few octaves above the rest of us. Carine shared her book with me during the book study, spreading the pages with hands decked out in oversized and sparkly jewelry and, when I left that coffee shop after the gathering, she put her hand on my arm, looked into my eyes, and thanked me for coming.

Linda – Linda was a participant in the community HU song as well, a confident and giddy middle-aged woman who gave me a firm handshake when I introduced myself. She periodically shared stories and opinions during the gathering and read loudly and animatedly from the book we were discussing. As she left the coffee shop, she handed me her copy of that book and told me to keep it: “I have about a dozen of these at home,” she said, “And besides, I think you’re supposed to have it.”

Nancy – Nancy, dressed in a flowing, blue, and flowery dress with curly dark hair and glasses, was one of the friendliest and most outgoing ECKists I met. Her face lit up when I walked into the room and introduced myself and, throughout the evening, she laughed, smiled, and clapped her hands together. A professional editor, she was deeply interested in analyzing and discussing the textual material and in finding the underlying meaning of experiences and even individual words. As the night ended, Nancy thanked me for my interest in Eckankar, for asking questions, and for really listening to the answers.

James – James was the most surprising ECKist that I met. As I sat in the back room at the Dunn Brothers coffee shop for the community HU song and watched James, an older man with grey hair using a cane to slowly lower himself into the chair, singing HU in a charmingly off-key fashion, and keeping mostly to himself, I didn’t expect to glean much from him. He said a few things during the meeting, but, as we all left, he requested to chat with me. The two of us sat in the coffee shop, drinking coffee and eating doughnuts, until the place closed at nine o’clock. We sat for over an hour together as he told me his story. Raised Catholic, James’ two sisters became nuns. “As I got into my late teens,” James said, “some of the things [in Catholicism] just didn’t make sense.” When he was twenty-seven, James was in a grocery store in Phoenix and turned around to find a shelf lined with the books of Paul Twitchell, one of the religious leaders of Eckankar. “The page I opened a book to was just what I was looking for,” James told me. “Something was in there for me.” After that, James “couldn’t read anything else.” After seeing a flyer for an ECK gathering, James went to the meeting at an individual’s home with three other people. “They told me about Eckankar,” James said, “and everything made sense to me. I went to meetings at their house once a month.” James’ job with a railroad company moved him to Denver in 1972, when he and his wife both formally joined Eckankar. Later, upon moving to Los Angeles, James became the area representative of Eckankar. He said that one of the things he likes most about Eckankar is that, “if you can accept the fact that this being [the ECK Master] is shaping your life and helping you find truth, that’s what it's all about.”

If you can accept the fact that this being [the ECK Master] is shaping your life and helping you find truth, that’s what it's all about. —James

Kathleen – Although I never met Kathleen in person, her words and involvement were critical to my deeper understanding of Eckankar. Kathleen serves as the head of public information for Eckankar for the State of Minnesota. Her quick and enthusiastic responses to my emails and phone calls yielded detailed and personable answers.

*The names of the ECKists I met and spoke with have been changed.