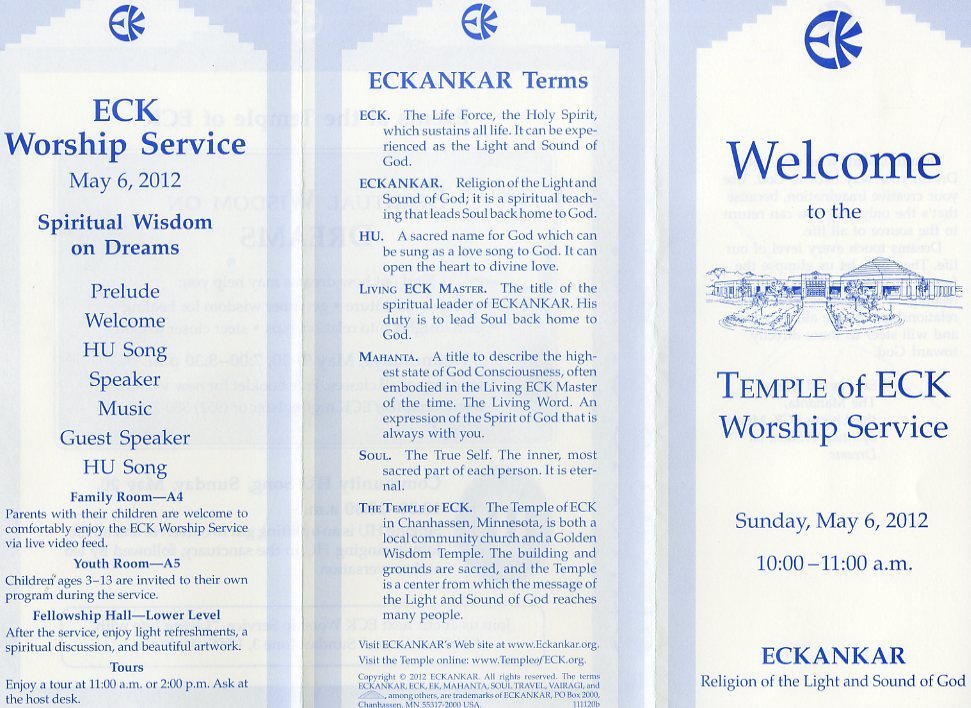 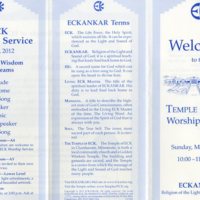 The outside of the Worship Service programs 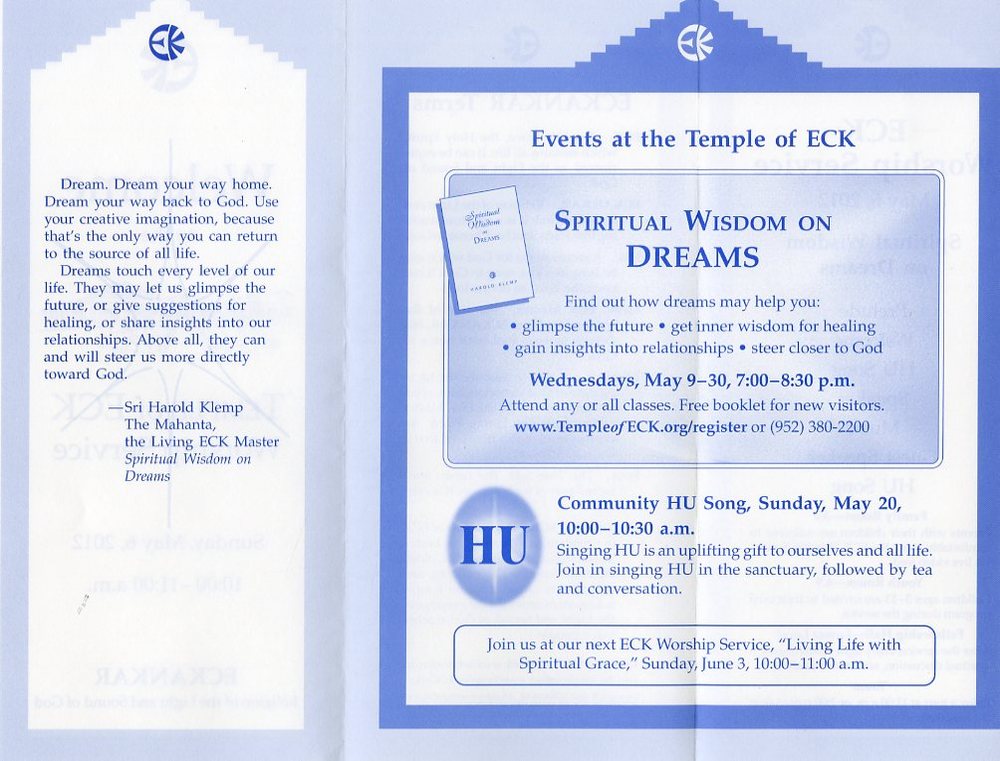 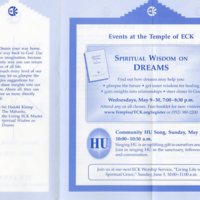 The inside of the programs handed out at the Worship Service 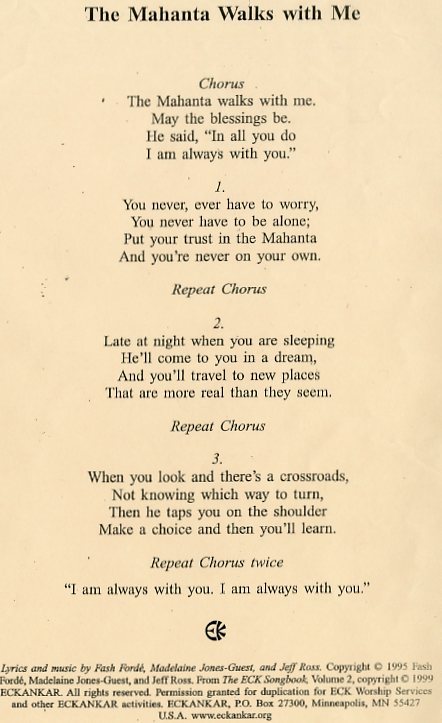 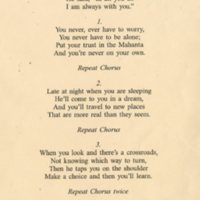 The lyrics of “The Mahanta Walks with Me,” a song from the Service

Around four hundred ECKists and visitors attend a service in any given month and a large percentage of the congregants attending are female. There are few families and the youngest people in the room are around college-age.

An ECK Worship service at the ECK Temple occurs on the first Sunday of every month when ECKists from Chanhassen and the greater Twin Cities area convene at the ECK Temple at 10 o’clock in the morning. Volunteers at the Temple, called hosts, hand out programs at the door to the main Sanctuary. The programs detail the schedule of the service, upcoming events at the Temple, and important Eckankar terminology. During the service, families are encouraged to join the Family Room (located in the lower level of the Temple) where they can view the service via a live video feed. In the Youth Room (also in the lower level), children aged three to thirteen are invited to their own program. Around four hundred ECKists and visitors attend a service in any given month and a large percentage of the congregants attending are female. There are few families and the youngest people in the room are around college-age. In the context of Chanhassen, an overwhelmingly Caucasian suburb, the Temple attracts a small, but nonetheless significant, population of African-American followers. The Worship Service begins with a Prelude that features instrumental music written and performed by ECKists, often inspired by Soul Travel or dreams.

The sound of four hundred people singing HU is a beautiful, yet strange and overwhelming sound that can best be described as a mix between a Gregorian chant and a didgeridoo.

After the Prelude, Eckankar President, Peter Skelskey, offers a Welcome to the community. Dressed in a suit, Skelskey urges us to “recognize God’s love in your life and experience it yourself” and to do “all we can to help people understand their relationship to God.” He reminds us that, “we are Spirit who have taken on a physical body.” Skelskey led us into singing HU by saying that “the song of HU is what we were birthed from” and that, in singing HU, we must not ask “God to do anything, [but] just let the pure love of God flow over you.” Congregants varied widely in their singing of HU; some closed their eyes, others had their eyes open, some sang loudly, almost operatically, others sang under their breath, nearly in a whisper. The sound of four hundred people singing HU is a beautiful, yet strange and overwhelming sound that can best be described as a mix between a Gregorian chant and a didgeridoo.

Soul is created from the sound of HU. —Eckankar President Peter Skelskey

The HU song only lasts about five minutes, at which time the Speaker, a member of the ECK Clergy, presents words to the community. Since the focus of the Worship Service was dreaming, Ann, a younger woman dressed in a brightly colored skirt and heels, took the stage and told of dreams she had before and after traveling to Africa. Her job as a wound therapist and associate professor at the University of Minnesota took her to Africa and, in struggling with experiences and emotions, she turned to dreams as a way to communicate with God. “When we sleep,” Ann said, “so much direct knowledge from God can come to us.” Through dreams, Ann said she realized that there was a specific reason she was meant to travel to Africa and that it was part of her spiritual mission to heal her “own past life with current service.”

After Ann spoke, a series of musicians took the stage. Mack was the guitarist and main vocalist, backed by a man on electronic keyboard and a woman on vocals. They sang an original song called “The Ocean of Love and Mercy,” a song with a folk-country feel detailing one’s relationship to God. Lyrics included: “You are manifesting wisdom, freedom, and beauty” and “You know it seems to me I have known you forever/And forever I have known myself.” Then, the musicians invited the congregation to sing “The Mahanta Walks With Me,” a song whose lyrics were handed out with the programs. The last line of the song notes: “I am always with you/I am always with you.”

In carrying through with the theme of dreaming, Matt, a guest speaker, offered his suggestions on how to achieve spiritual change through the process of intentional dreaming and dream journaling. He noted that his goal was “to become more consistent in dreams” and that he wanted to offer “tips on how to keep that line of communication open.” Matt suggested that “the answers are all inside me, but through the Mahanta [and his aiding of dreaming], you are allowed to access your inner mind.” His suggestions for more successful dreaming included: upon waking up, saying good morning to the Mahanta, writing in his dream journal that he hopes to keep that line of communication open, and singing HU while asking to have a dream or to solve a problem.

We are Spirit who have taken on a physical body. —Peter Skelskey

At the conclusion of the service, another short HU is sung. Skelskey leads this HU, too, offering the suggestion that “Soul is created from the sound of HU.” After the service, ECKists and visitors are encouraged to visit the Fellowship Hall on the lower level of the Temple, where light refreshments (cookies and coffee) are served.