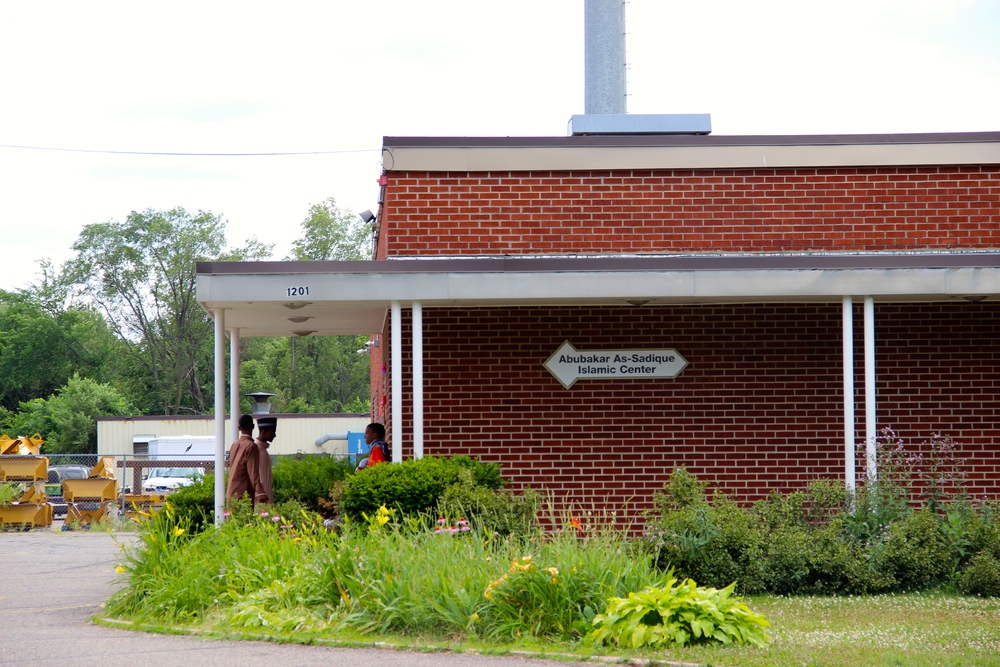 Location and Surroundings Through Time

In October 2007, the Somali community in Faribault began renting a space in the strip mall on Cannon Circle, next to an exercise gym called “Fit for Life,” Hoysler Real Estate Services, and a tanning salon. Named the Abubakar As-Saddique Islamic Center, this space was used for Friday Prayer, for Qur’an school (dugsi) on Saturdays and Sundays, and for the two Islamic holidays of Eid.

As of 2016, Abubakar As-Saddique Islamic Center is located at 1201 Division Street in Faribault, Minnesota, in a nondescript one-story (with a basement) brick building with a sign reading "Abubakar As-Saddique Islamic Center". An American flag flies in front of the building, which sits in a mixed neighborhood of industry and private houses, next to the Motor Vehicle and License Office and in front of a huge vacant lot, formerly the site of a foundry.1 There is nothing physical on the outside of the building to suggest that it is a Muslim religious site, although the neighbors are aware that it is, so others in the town may be as well. However, the masjid (mosque) has its own geography not marked in writing or signage: it is known in the Somali community as a location for prayer, and separate entrances and spaces exist at the masjid for men and women. The building has not yet been remodeled or retooled to reflect its relatively new status (since 2013) as a masjid. The finished basement, which serves several functions as an education area and the women’s prayer space, has few easily visible indications of its status as prayer space or as Muslim. The only markers of this status are the presence of stacks of Qur’ans, furniture that is easily moveable (perhaps to facilitate prayer), and a white-board on which religious education lessons are written in Arabic.

The Islamic Center moved to Division Street in July 2013 from the smaller site on Cannon Circle.2 The Cannon Circle site, was located in a storefront in a business park. Like the current site, it was fairly nondescript and in a business/industrial area. However, there are important differences between the two sites. The most important, as many people at the masjid emphasized, was that the masjid had rented the previous site, but owned the current one (for more on this, see The First One That We Bought: A New Building and Community Ownership). This shows the increasing economic power of the masjid’s members and supporters. The new site gives the masjid a more permanent foothold in the community, and increased space for prayer and events.

The masjid is located close to at least two other sites of importance for Somalis in Faribault: Faribault Public High School, which is half a mile away, and Lyndale Halal Market, one of three halal markets in town, about a third of a mile away.

There is one other masjid in Faribault, which complements rather than competes with the Abubakar As-Saddique Islamic Center. According to Leyla, a young woman at the Islamic Center, this masjid is a small room downtown, a prayer space for those who work in town, want to pray in a communal space, and don’t have enough time to get to the larger masjid during work hours.