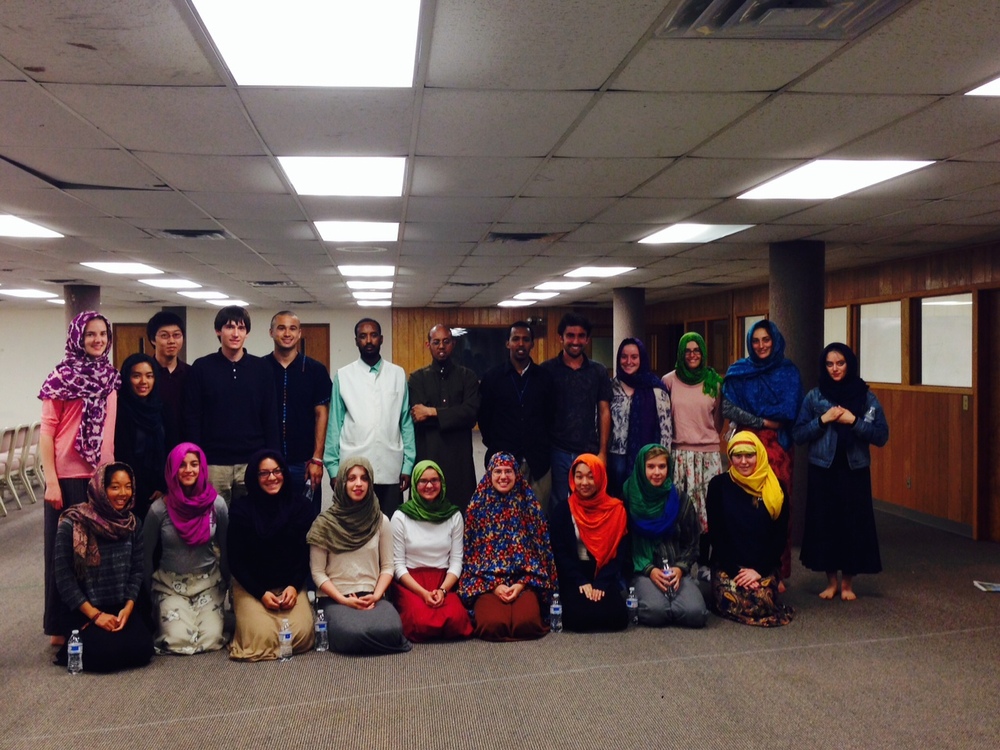 Our Global Religions class visiting the Faribault masjid on a field trip in spring of 2014. I'm the one in a jilbab.

This project came at an unusual time for me. When I began the project, I had just finished writing an in-depth, ethnographic senior thesis about a Haitian Baptist church in South Florida, based on fieldwork I had done over the previous summer and winter break. My thesis had made me very excited about ethnographic fieldwork, and I was particularly excited about this project, studying the Somali masjid in Faribault, because it was public scholarship in which I could share what I learned with a wide audience. I wanted to learn more about Islam, and about Somali culture, which I had encountered briefly several times in Faribault. For me, learning “more” meant learning practically everything—I had some academic background in Islam, but almost none studying East Africa or Somalia.

During my first experience at the masjid, I was sure I had gotten in way over my head. After an odyssey through Faribault trying to find the site, which had moved since its address had last been listed online, I went to a Friday midday prayer, figuring that it would be a solid bet for meeting people. My long skirt, borrowed from a friend, didn’t fit me, and my hijab, which I hadn’t yet figured out how to wear, kept falling off. I talked to some men outside the masjid, who showed me the women’s entrance and prayer space, but when I went in, no one was there. I sat in a corner taking field notes about the space, and listening to the sermon I couldn’t understand through speakers in the ceiling. Eventually a woman came in with three children, but I wasn’t sure whether I was allowed to introduce myself in the midst of the sermon. I sat around awkwardly smiling at her and the children, trying to be unobtrusive. After the family—the only people at the women’s jumu’ah (midday Friday prayer)—had prayed, I introduced myself to the woman, who told me her name was Fayisa. She spoke very little English, and we communicated mainly through smiles. Black dots of henna adorned her hands and bare feet, and I wished I could ask her about them. I was surprised and deeply grateful when she bought me a bag of sambusas after the prayer—a taste of the hospitality I would be shown throughout my time at the masjid.

After the family—the only people at the women’s jumu’ah (midday Friday prayer)—had prayed, I introduced myself to the woman, who told me her name was Fayisa. She spoke very little English, and we communicated mainly through smiles.

I soon learned that although mainly men attended the Friday jumu’ah, many more women were at the masjid on evenings and weekends, and I soon met fluent English-speakers at the masjid, including many high-school girls who were eager to “translate” various facets of life at the masjid for me. Over the ten weeks of our school term, I’ve been able to learn so much about a community that was totally unfamiliar to me when I began. I have been deeply honored by the people of the masjid welcoming me into their lives and religious spaces. People of all ages and both genders were willing to talk to me in depth about their lives and thoughts. One woman gave me a beautiful jilbab; another invited me to a wedding. These actions are particularly meaningful to me in face of the Islamophobia that Somali Muslims encounter every day from white residents of Faribault: they have every reason to distrust white Americans, yet they still welcomed and trusted me.

However, in some ways my initial impression has remained true: there was much more going on at the masjid than I could hope to understand in the time I had. I had particularly high expectations for what I could accomplish because of my in-depth fieldwork experience for my thesis, but I found that in ten weeks of part-time fieldwork, I could hardly do more than scratch the surface of what it was possible to learn from the masjid. The spring of my senior year (with graduation quickly approaching) was a particularly difficult time for me to build relationships with new people. I’m proud of what I was able to learn at the masjid, but it’s hard for me to leave this class, and Minnesota, knowing how much more I could learn if I had more time. I hope that others will be able to use and continue to build on the work I’ve done.