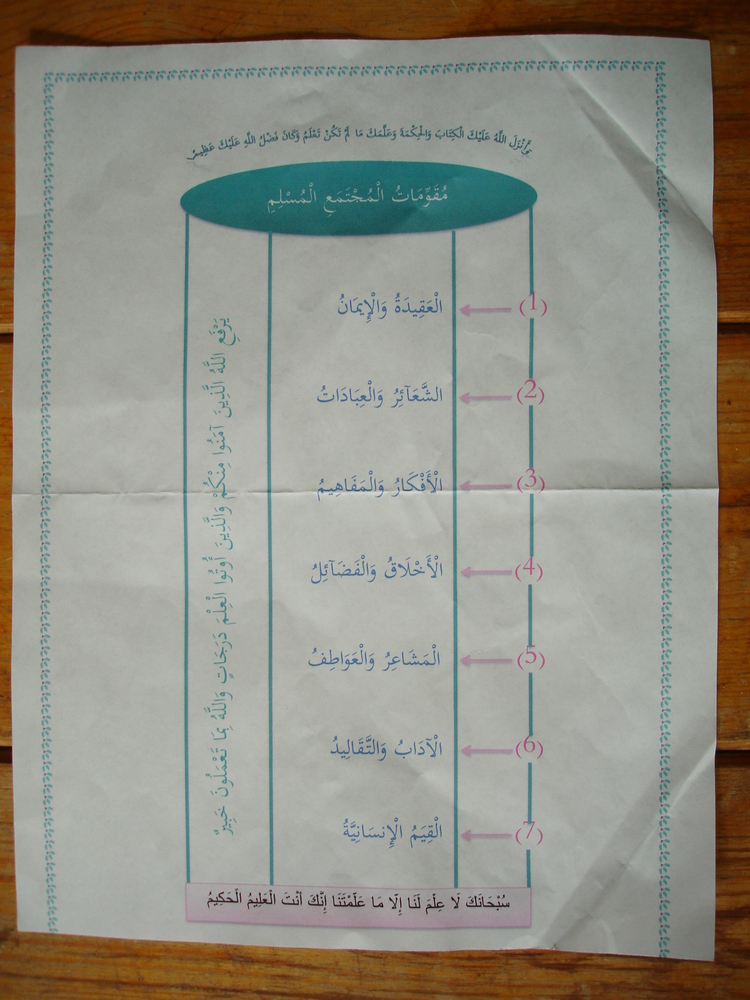 A schedule of weekly youth class topics, written in Arabic.

Three languages, Arabic, Somali, and English, are used regularly at the masjid. People use all three to teach and learn. Young people often mix Somali and English when talking with each other while older people mainly spoke Somali and sometimes used Arabic if they had studied it. The few non-Somali Muslims who came to Friday jumu’ah prayer used English and Arabic to talk to others.

Most people at the masjid believe that each language is useful and important in its own way, but value Arabic the most. An imam at the masjid believes the debate over which languages should be taught and learned is a very important question. Like most, the imam came down squarely on the side of Arabic, because it is the language of the Qur’an and hadith, as well as an international language. He explained that it was important for the community to avoid losing the Somali language. However, he continued:

Arabic is more important. Arabic was the [most prominent] language in the world…but English is that now. The Arabic language is very important because it’s in the holy book. It’s in the Qur’an. And also Arabic is an international language; Somali language is only for the Somali people. I think the Arabic is more important to learn than Somali; the Somali person needs to learn more Arabic. Right now we teach Arabic in here, [and] there are two different classes…level 1 and level 2. But there is not any Somali class that we teach here right now.

Sagal had a similar perspective. When asked which language was more important to learn, she explained that she and other teenagers at the masjid already knew Somali:

People at the masjid often learned to read and write Arabic, and recite Qur’an in Arabic, before they could fully understand it. Some at the masjid spoke and understood Arabic fluently because they had lived in Arab countries, often Yemen, after leaving Somalia, but most were in the process of learning, and learned they learned how to read first. Even the youngest children were taught the Arabic alphabet in masjid classes, and the religious uses of Arabic at the masjid were mainly in reading the Qur’an and hadith, along with the commentaries on them. Bashir described his struggle with understanding Arabic:

I can read Arabic, I can write…But the understanding is the problem. I know what the news anchors say, and I can read everything, but the meaning is different, to understand is different.

Most masjid classes, in every subject, have been taught in a mixture of Somali and Arabic. Only one teacher, who has helped teach the Friday classes, occasionally speaks in English to give a prepared lecture. Although few people spoke Arabic in casual conversation, people often used Arabic greetings and words alongside Somali ones. The Arabic greeting “As-salaamu aleikum,” “Peace be upon you,” was particularly common.

Although Arabic was most highly valued at the masjid, most people seemed to feel that Somali was also important to know and learn. The one occasion when Somali seemed devalued as a language was when a ten-year-old girl explained that adding 'o' to the end of Arabic women’s names, a common way of forming Somali women’s names, was the “bad Somali way” to say the Arabic words. Most of the time, people expressed love and concern for the Somali language, which they sometimes feared was being lost.

A ten-year-old girl explained that adding 'o' to the end of Arabic women’s names, a common way of forming Somali women’s names, was the “bad Somali way” to say the Arabic words.

Most Somali people in Faribault, according to Bashir, speak the Maay dialect of Somali, which people were concerned with losing at the masjid. A few spoke other dialects, which are not easily mutually intelligible, particularly Maxaa, which Bashir explained was “hard to understand; if you don’t know it you have to learn.” No one seemed to be talking about these other dialects at the masjid, but those who speak them may be in even more danger of losing them than Maay-speakers are of losing Maay.

During one class, a girl explained that some of the younger children weren’t paying attention because they spoke English better than Somali, and that the teachers sometimes had to use English to help them understand. Many adults, including at least one imam, were concerned about situations like these, and expressed a strong opinion that all Somali children growing up in Faribault should speak Somali fluently. Bashir said:

English at the masjid is generally spoken amongst young people, who switch fluently between English and Somali. On a visit to the masjid in 2016, a group of middle school boys toured me around because, although there were adults present, they were the only ones who could speak fluent English.

Sagal explained that, although she spoke Somali, she and others her age were “better off” listening to religious lectures in English than Arabic or Somali, because they understood English most fluently, although they used Arabic and Somali daily at the masjid.